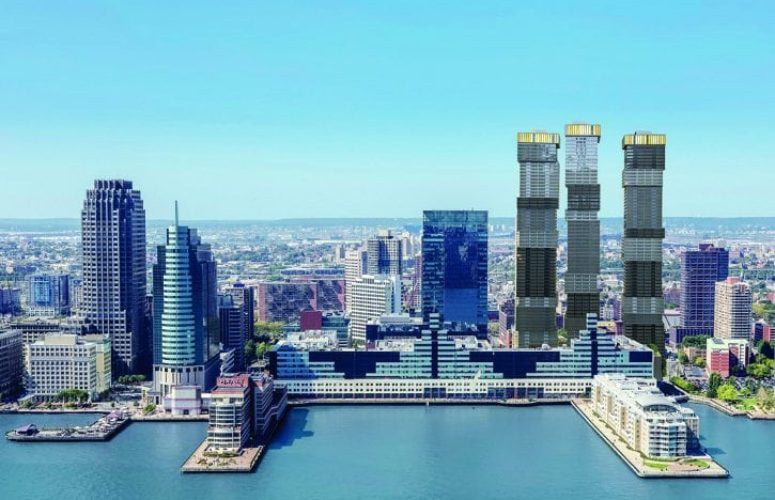 Harborside will be the fourth NY Waterway commuter ferry terminal in Jersey City, giving this growing city the most extensive ferry service of any city or town in the Garden State.

Mack-Cali, an owner, manager and developer of premier office and multifamily properties on the New Jersey waterfront, is undertaking a multi-phase plan for Harborside, which will be a destination neighborhood that blends premier offices, luxury living, locally inspired shopping and dining, and public spaces.

“Investment in transit and finding alternative means of transportation has been a focus of our administration since Day 1,” said Mayor Fulop.  “Whether it was creating 22 miles of bike lanes, adding a 24-our bus route to and from New York City and now this commuter ferry terminal at  Harborside, not only are we giving our residents more mass transit options, but we are allowing visitors another avenue in which to fully experience Jersey City’s rich cultural scene.”

“Thanks to Mayor Fulop, Marshall B. Tycher, Michael J. DeMarco, and his team from Mack-Cali, NY Waterway can offer even more people who live and work in Jersey City the better commuting alternative – the ferry – a faster, more dependable, environmentally cleaner way to get across the Hudson River,” Mr. Imperatore said.

The Harborside Ferry Terminal at 210 Hudson Street is served by the Hudson-Bergen Light Rail, the PATH at Exchange Place and NJ TRANSIT buses on routes 80 and 82.

“Harborside now has the complete transit package,” Mr. DeMarco said. “The ferry provides a direct connection to both PATH and the light rail, and Harborside has 3,500 parking spaces available for those who commute by car.  Additionally, commuters can be comfortable waiting for their next connection inside the recently renovated Harborside Atrium.”

Service between Harborside and the West 39th Street Ferry Terminal in Midtown Manhattan will be offered Monday-Friday 6:30 a.m. to 9:50 a.m. and 4 p.m. to 7:38 p.m.  Ferries will depart every 30 minutes for the eight-minute Hudson River crossing. At West 39th Street, NY Waterway offers free, seamless connections to its fleet of modern, climate-controlled buses serving five routes throughout Manhattan. Fares are $8 for a single ticket, $75 for a 10-trip ticket, and $274.50 for a monthly pass.

The monthly pass is about $6.50 per trip, about $1.50 more than the combined cost of a 30-day PATH Smartcard and a 30-day MetroCard for the subway.

Service between Harborside and Brookfield Place/Battery Park City will be offered Monday-Friday 6:40 a.m. to 9 p.m. Ferries depart every 15 minutes for the six-minute crossing.  Fares are $6 for a single ticket, $56.50 for a 10-trip ticket and $196 for a monthly, about $4.65 per trip.