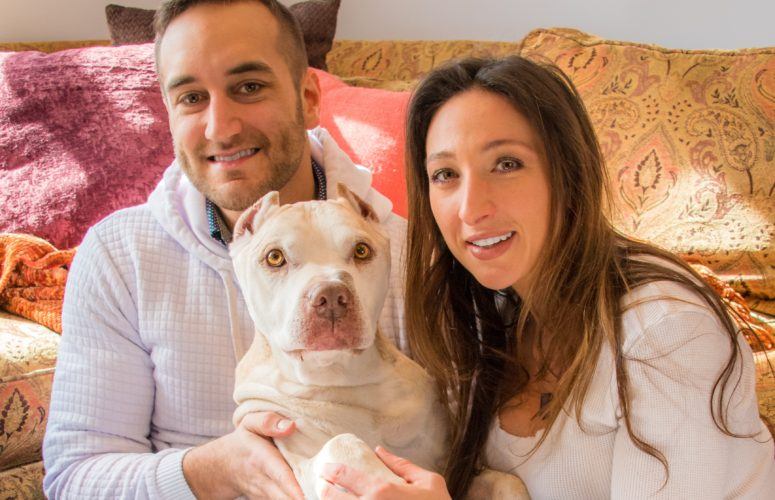 Jason and Michelina Kraus with their pit bull, Bubbins.

Jason Kraus stands at 6 feet 4 inches tall and weighs 235 pounds. He holds a Master’s Degree in Counter-Terrorism and Homeland Security. He worked as a government contractor, conducting background investigations, as well as investigating financial crimes for Ernst and Young. He is also probably the most unlikely person to have written a children’s book.

How did this happen? Jason’s wife Michelina decided she wanted to do something special. She adopted a scarred, senior pit bull mix. That changed the Krauses lives completely. A whole new world opened up as the couple began to understand and to feel the depth of the crisis involving abused animals. Jason became so inspired that he wrote and published a children’s book to help teach the next generation of animal owners how to treat them properly. The book, entitled Belly Rubbins for Bubbins; The Story of a Rescue Dog, now appears on Amazon.com and other bookseller sites. In its first weekend, the book soared to No. 2 on the BN.com’s 100 best sellers. But the book was only the beginning.

The New Jersey couple began to reach out to organizations to support their efforts. The outpouring of favorable responses exceeded their wildest expectations. While their dog Bubbins was only one of hundreds of thousands of rescues that needed a good home, they discovered a vast community dedicated to the same cause. One such group, iPittytheBull, a California-based 501C3, brings dogs to schools to educate children. The Krauses chose that organization to administer their charitable donations. The author has chosen to dedicate 51% of all net proceeds from the sale of the book and other items to animal charities.

The book, not only creates awareness of the plight of forgotten dogs, but sheds light on the importance of resilience and positivity. In addition, first-time author Jason Kraus seeks to end the unfair discrimination against so-called “bully breeds.” He himself fell victim to the social conditioning that stigmatizes certain breeds. Reluctant at first when his wife suggested the adoption, he soon learned how wrong he was. He indicates the need to talk about these issues before we can resolve them.

Jason Kraus is quick to relate that the book and its mission is not just about dogs. The author’s message clearly relates to how we treat our fellow humans, as well. Besides bullying and abuse, the book also points to forgiveness—a quality that dogs, even abused ones often have—perhaps sometimes more than people do. It’s about giving. In Jason’s words, “The more you give, the more you get.”  He urges everyone to be part of the 51%.