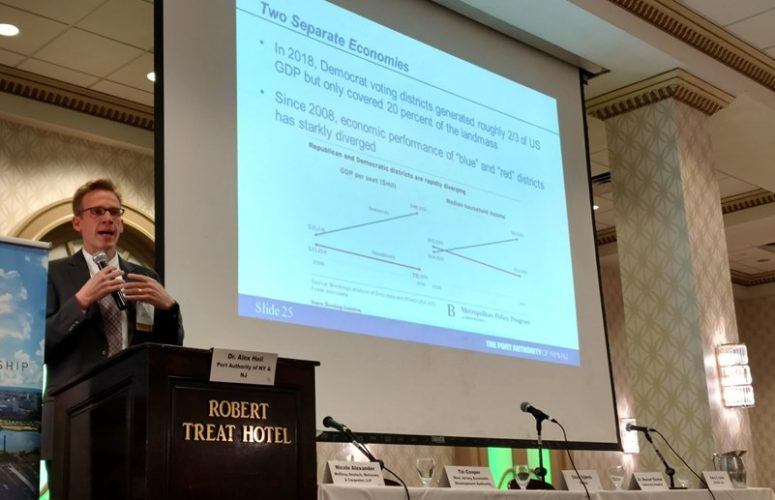 The name of the Newark Regional Business Partnership’s (NRBP) Regional Economic Outlook conference this morning was titled: “It’s Coming, But What is It?” According to guest speaker Dr. Alexander Heil, chief economist of the Port Authority of New York & New Jersey, that “it” could be a recession in 2020.

The New York office of the Federal Reserve, Heil reports, sees a 35% chance of a recession occurring next year, and that statistic is higher than usual estimates, he explained.

The regional economy, so far, has been strongly driven by New York City employment growth, but that growth is slowing. “While 2% employment growth has been the norm, that rate has dropped. At the 10-year economic expansion mark, Heil said the nation is back to 30-year employment growth patterns. “We have had a reversion to the mean,” he told the audience.

The pessimism is global, Heil said, adding that issues such as trade tariffs and BREXIT are to blame.

“We had been enjoying the benefits of globalization and low tariffs [these past few decades],” Heil said, but in recent years, tariffs have increased and significantly impacted the economy.” Ironically, port business in the region has been reaching record-breaking levels. Why is this happening?  Heil said it is because “we have 25 million people living in this region with high incomes and the ability to spend.”

What consumers do next is the big question. “If they continue spending into the holiday season, we will be fine.  I think 300-million-plus Americans can do a lot to pull the economy along. The problem is what happens once confidence erodes and people feel they shouldn’t buy the new car or iPhone? That will be the indicator that the economy is in trouble. Right now, the overall pattern looks decent, but the trend is one of slow growth,” he said.

Sectors that are now possibly in a recession include manufacturing, which grew by 2 percent between 2016 and 2018, but has now flat lined and is experiencing job losses. This is also having a negative impact on the trucking industry because with less goods being produced, there is less trucking and shipping, Heil said.

He commented that the Federal Reserve will probably lower interest rates again, “but that means it won’t have much ammunition left in terms of responding to an economic slowdown because we are approaching near 0 interest rates … and you can’t push it below that,”Heil explained.

A panel discussion followed Heil’s economic forecast, concentrating on, among other topics, attracting and retaining millennial and Gen-Z workers.

Tai Cooper, vice president, policy and communications at the New Jersey Economic Development Authority (NJEDA), said there is a huge disconnect between what employees want and what employers need and that the gap “needs to be bridged.”

Gary L. Love, vice president of sales and marketing at FAPS, Inc., an automotive industry import/export preparation company based in Port Newark, added that his company is looking at how to balance  millennial needs (such as using smart phones and logging onto social media sites) with every day, on-the-job business requirements.

Dr. Shereef Elnahal, president and CEO of University Hospital and former New Jersey Health Commissioner, told the audience that millennials “are your prime workforce … your junior level staff … they are your most productive employees. They are our most mission critical part of workforce development at our hospital.  They want a healthy work culture, promotional opportunities and want to be part of the decision-making process.” Salaries are third or fourth on their list as a concern, he said.