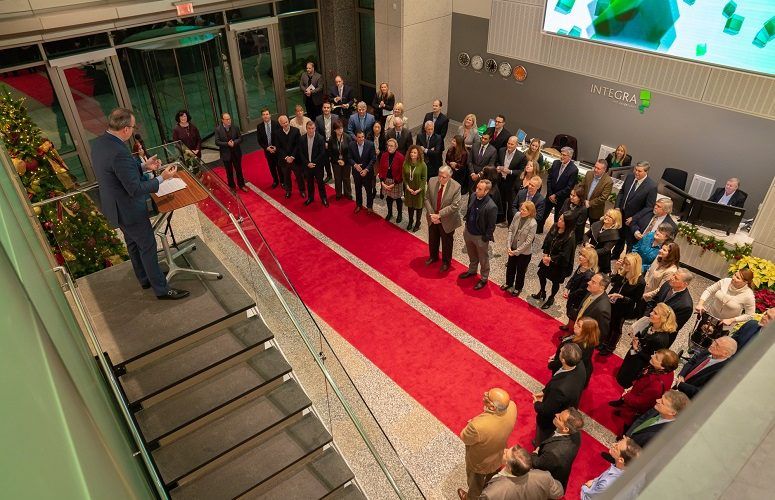 “We looked hard and wide at other towns in New Jersey and other states before choosing this location,” Integra LifeSciences’ President and CEO Peter Arduini told the audience. “For a lot of good reasons, we just kept coming back to this area.”

Integra’s Vice President of Global Marketing Ruth Fleming told New Jersey Business that the site “is in a beautiful beltway of other medical technology companies.”

She added, “Being in the Princeton and Plainsboro area [gives us access to significant labor market] talent to potentially recruit into our organization.”

She additionally cited the ability to collaborate with other firms, and the fact that current employees did not have to readjust their commutes too much when they began occupying the new facility during the week of November 24 (workers had previously been located at 311 Enterprise Drive in Plainsboro Township).

“If we left New Jersey, we might have left behind a workforce that [would have been] burdened with a really long commute,” she explained. “Having this location was incredibly convenient because it didn’t disrupt.”

The move is in conjunction with a nearly $18-million New Jersey Economic Development GrowNJ tax incentive, which reportedly will require that its terms and conditions are certified.

Slated for completion in the second half of 2020 will be Integra’s world-class technology center, located at the old 311 Enterprise Drive site.  The site will not only house the R&D team and feature sales training, but also allow for professional surgeon training via a cadaver laboratory (surgeons will be able to perform surgeries and then use imaging equipment to approximate outcomes).

Fleming explains, “Let’s say they replaced an ankle on a cadaver leg.  Then, they could image it and see how [it] looks once it is in the body. It really [will be] a full-service cadaver lab for our products or any surgical technique.”

She adds, “It [will] give us a lot of runway for courses and to train salespeople … it just makes them so much better at what they do, to be able to get their ‘hands on’ and see the surgical techniques that accompany products.”

It’s all part of what is arguably a new chapter for Integra LifeSciences, a company which was founded in 1989, but can trace its origins as far back as the United States civil war.  Today, Integra’s products are central to the orthopedics, neurosurgery, reconstructive and general surgery spheres, with many of its products common in operating rooms throughout the world.

With Fortune magazine naming Integra among its 100 fastest-growing companies, President and CEO Arduini told the audience, “As our company grows, we live and breathe by this model that is over the door, which is an old Ben Franklin quote about doing well by doing good.”