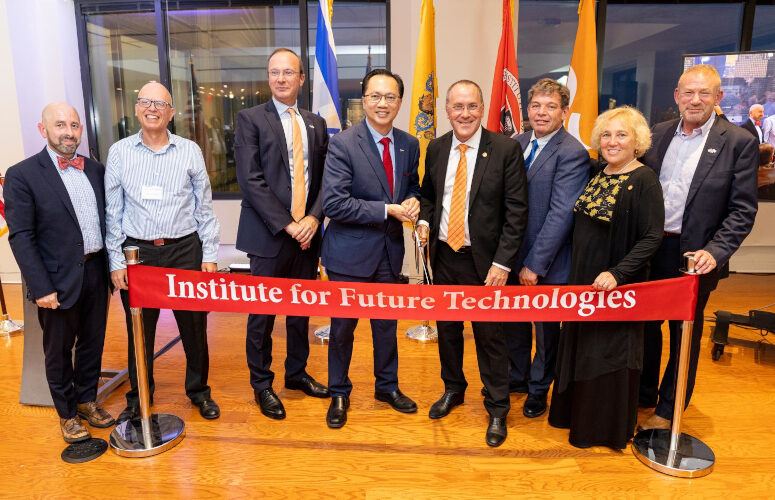 New Jersey Institute of Technology (NJIT) and Israel’s Ben-Gurion University of the Negev this week unveiled the home of the Institute for Future Technologies, an international research, education and innovation center in Jersey City.

Although the Institute and its research began last year, the opening ceremony — on the 36th floor of a building on Hudson Street, home of NJIT@JerseyCity — had been delayed by the pandemic.

Speaking at the event, which was co-hosted by NJIT, BGU and Americans for Ben-Gurion University (A4BGU), NJIT President Teik C. Lim said that the institute epitomizes the university’s progress, which must continue.

The president further noted that in academia, “we move at a geological time scale, but once in a while you get a quantum leap,” which happened in 2020-2021 as the pandemic forced students, faculty and staff to suddenly master the art of digital education.

“So, this institute for Future Technologies was created at the right time and in the right place,” Lim said. “If we do this right, it will open the whole world to NJIT.”

BGU President Daniel Chamovitz comments that with plans spanning study space for exchange students, joint graduate degrees, ideation-stage startups and even combined faculty appointments in fields such as artificial intelligence, civil engineering and cybersecurity, it is difficult to predict how the institute might evolve. “But that’s okay,” he said.

“It doesn’t matter if we don’t know what the endpoint is. It matters that we’re willing to make that first step,” Chamovitz said. He added that his university’s namesake was David Ben-Gurion, the first prime minister of the State of Israel, who knew during the nation’s founding that the future could go in any direction.

NJIT’s Baruch Schieber, professor of computer science and director of the Institute, agreed that its plans are unconventional, but said they’ve already been fruitful. Faculty at both universities are collaborating and would not have met if not for the partnership, he said. One measure of the Institute’s success will be funding from the National Science Foundation and the joint U.S.-Israel Binational Science Foundation.

Marchetto Higgins Stieve Architects Honored as Firm of the Year