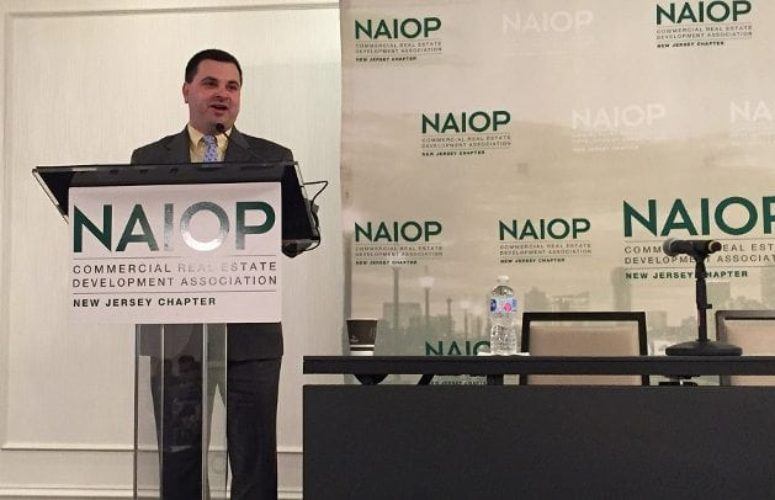 Infrastructure and logistics continue to be critical factors shaping New Jersey’s economic and real estate landscape. In the first installment of its 2018 “Building a Better NJ Series,” held at the Meadowlands Hilton in East Rutherford, NAIOP New Jersey invited top industry experts to examine key issues ranging from the future of the Gateway Project to supply chain challenges and the ongoing evolution of the Port region.

“Funding for infrastructure and redevelopment and the explosive growth of e-commerce are just some of the factors that continue to impact the commercial real estate industry,” said Michael McGuinness, CEO of the New Jersey Chapter of the commercial real estate development association. “Our speakers provided insight into current trends and how New Jersey’s ongoing infrastructure and logistics issues are being addressed.”

“Transportation is the lifeblood of a corridor state like New Jersey,” said Anthony Attanasio, executive director of the Utility & Transportation Contractors Association (UTCA) and one of Governor Phil Murphy’s chief transportation policy advisors. “The good news is that, with the renewal of the Transportation Trust Fund, our capital fund is robust. However, the reality is there is never enough funding for infrastructure.”

According to Attanasio, $1.2 billion in contracts was awarded in the first fiscal year, the bulk of it allocated to repaving the state’s roads. This fiscal year, only $300 million has been deployed. “We currently have a shortage of experienced staff and it is making it difficult to get money on the street,” he noted. “This administration promised the taxpayers delivery of a massive infrastructure program, and we need to address the people problem in order to get the rate of return we expect.”

When asked about the future of the Gateway rail tunnel project in the absence of federal funding, Attanasio said, “It’s in a precarious place. We need it, and we are in a position to move forward when funding is available, but right now it’s not.” He added that Governor Chris Christie’s cancelation of the Access to the Region’s Core (ARC) tunnel project “was the greatest mistake of the last 50 years. We could start ARC today and it would still be done before Gateway.”

Attanasio assured attendees that Governor Murphy has made improving the state’s infrastructure a priority for his administration. “Every dollar invested in infrastructure returns $5 to the local economy. The governor recognizes that the economy will flow better when our infrastructure is working, which will positively impact your business.”

The Infrastructure panel discussion included an update on the New Jersey Infrastructure Bank (NJIB) as well as a look at redevelopment currently taking place in Newark and Harrison. Frank Scangarella, who has been with the bank (formerly the New Jersey Environmental Infrastructure Trust) for 14 years, outlined the agency’s new mission and the loan application process for developers.

“We provide funding primarily to local government units on wastewater, drinking water and remediation projects,” said Scangarella. “The redevelopment financing structure is a 50 percent market rate loan for 30 years, and we have made improvements such as rolling applications and a streamlined approval process. But the government doesn’t always work as fast as we want it to, so understand your needs and the loan approval schedule and plan your construction timeline accordingly.”

Richard Miller, CEO of The Pegasus Group, credited the NJIB with providing funding that has helped make planned real estate projects in Harrison a reality. “We couldn’t have done it without the funding,” said Miller, who was the first developer involved in working on large-scale redevelopment and remediation projects, including Harrison Station, that have turned the city into a magnet for Millennials.

In nearby Newark, Carmelo Garcia, acting director of Economic and Housing Development, said, “The renaissance in our city is real in terms of infrastructure investment, and what’s happening downtown is truly transformative.” Garcia noted that city officials are excited about the Amazon HQ opportunity and are moving forward with improvements such as street repaving, more walkability and bike paths, which are integral to Amazon’s assessment.

Large-scale projects include a 17-acre riverfront park and constructing flood walls as a storm water management measure to prevent the flooding that occurred during Superstorm Sandy. “We’re making a heavy investment in resiliency and sustainability, and focusing our redevelopment efforts on environmental, employment and economic impact,” said Garcia.

“When we talk about logistics we have to talk about the Port business,” said Ken Spahn, regional director of Ports and Intermodal at Dewberry, who moderated the Logistics panel discussion. “2017 was a banner year, with the completion of the Bayonne Bridge Clearance Project. The Neo-Panamax vessels started calling and a record amount of cargo began going in and out.”

According to Anne Strauss-Wieder, director of freight planning with the North Jersey Transportation Planning Authority, the Port is the largest on the East Coast and its maritime facilities handled 6.7 million containers in 2017 – a new high. However, lack of space for expansion and workforce shortages across the supply chain are creating challenges when it comes to meeting demand.

“Last year, 49 percent of retail growth was in e-commerce,” Strauss-Wieder said. “Immediate connectivity to the consumer is the big growth area, and ‘just in time’ is no longer fast enough. We need to work together to bring the workforce into the supply chain community.”

The food industry has become a key driver of last-mile delivery. According to Lou Cooperhouse, executive director of the New Jersey Food Processors Association, the state has become a gateway for many global and local food companies. “New Jersey’s food sector is a thriving $127 billion business that relies on our extensive transportation network to carry goods by land, sea and air.”

Bigger ships mean bigger surges of containers into terminals, compounding the congestion at terminals that has long been an issue. “Our customers want their trucks to get in and out of facilities as fast as possible. If they can’t do that, they’ll move to another port,” said John Atkins, president of Global Container Terminals. “Productivity enhancements, better space utilization and embracing advanced technology such as terminal operating systems is critical to staying ahead of the curve.”

Bill Waxman, who leads CBRE’s Port and Integrated Logistics Practice, agrees that congestion and the condition of roads are important issues for his clients, as well as the labor shortage and overall lack of available warehouse space. “End users have gotten sticker shock, with double digit rent numbers for the best properties in Northern New Jersey.” Waxman noted that incentives are “playing a huge part in site selection, helping to offset costs and making the state more competitive.”