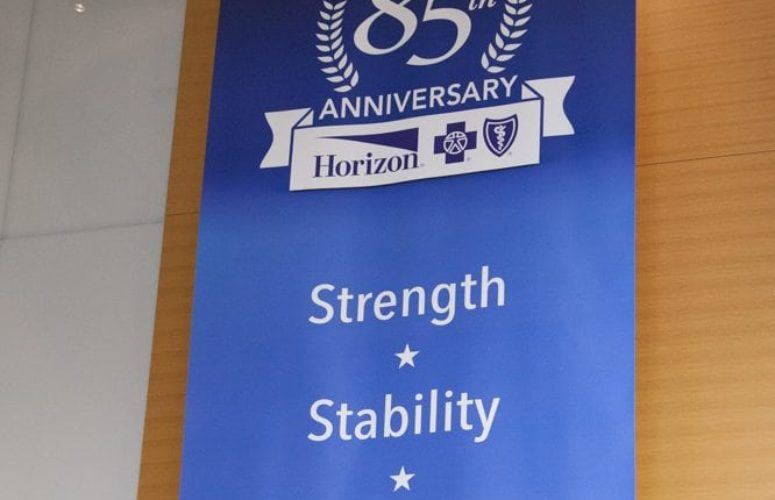 It was a banner day for New Jersey’s first health insurance company – and one of the nation’s first health insurers – as Horizon BCBSNJ unfurled a commemorative banner at its Newark Headquarters today to celebrate its 85th anniversary. A milestone eight-and-a-half decades in the making, the company’s employees and officers were joined by local, state and congressional leaders in paying tribute to the company’s commitment to New Jersey and serving millions of Garden State residents over several generations.

“Providing security, stability, peace of mind and serving our policy-holders with excellence were the hallmarks of our heritage, and they remain the guiding principles of our company today,” said Robert A. Marino, CEO, Chairman and President, Horizon BCBSNJ. “Even in the challenging times we face today, our 3.8 million members know they can count on us to be there for them when they need us.”

Kevin P. Conlin, Executive Vice President and Chief Operating Officer, Horizon BCBSNJ, added: “Horizon was a trail blazer when the company was founded in 1932, and today we continue to innovate and collaborate with the health care community to improve the quality of care for our members, while working to keep health care costs under control.”

“I’m grateful for Horizon’s proven commitment to enhancing the quality of life of New Jersey’s communities,” said Donald Payne, Jr., U.S. Congressman whose 10th district includes Newark. “Congratulations on your 85th Anniversary and I’m happy that your main headquarters has remained in my city – Newark — for 85 years.”

Assembly Speaker Vince Prieto also praised Horizon for its “bedrock” presence in New Jersey, particularly during a changing landscape in health care. “As we see uncertainties in our nation with the Affordable Care Act, we always depend on New Jersey’s insurer, and that is Horizon,” he said.