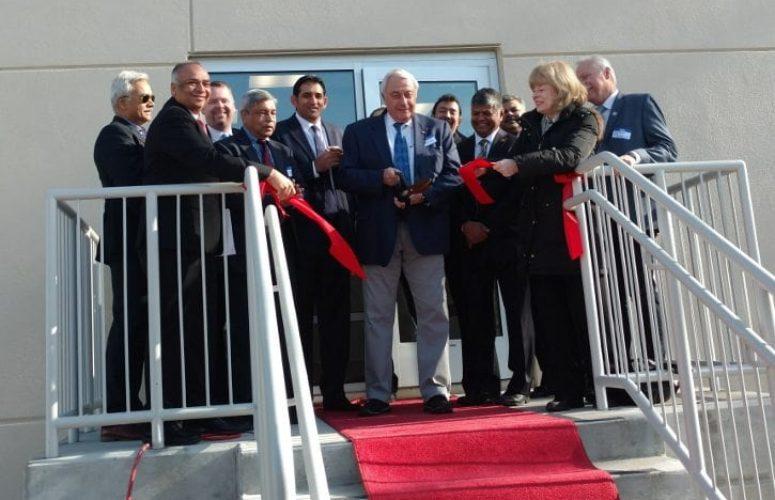 Heritage Pharmaceuticals, Inc. today cut the ribbon on a $22 million, 38,000-square-foot manufacturing facility in East Brunswick, bringing the generic drug maker’s footprint in the municipality to 125,000 square feet and 225 employees.

The company, which is a subsidiary of India-based Emcure Pharmaceuticals, currently manufactures 28 different oral medications in tablet, capsule, softgels and powder form. The therapeutic categories that the company produces generics for include cardio vascular, metabolic disease, anti-infective and pain management.

According to Heritage Chairman Marvin Samson, the East Brunswick facilities combined produce some 2 billion units of tablets, capsule and powders annually, which can fill roughly 1.5 million medicine bottles. He said the East Brunswick location is an exceptional area to work and build a business in due to its dedicated workforce and helpful township administration, which he called “great partners.”

The facility was designed by Greek Development, also of East Brunswick, and entails modular building features, including easy-to-clean panels which are important for a drug manufacturing facility in order to prevent drug contamination. Samson boasted that the US Food & Drug Administration has visited and inspected the Heritage site 10 times over the past 13 years, with the company “exceeding compliance” each time. It has also been visited by Canadian, European and Australian regulatory authorities.

According to Emcure CEO Fakrul Sayeed, the parent company has 10,000 employees worldwide, the majority of whom are based in India. The company also has facilities in England and Canada.

Regarding future U.S. growth, Heritage Pharmaceuticals President Scott Delaney said the company has a fantastic pipeline of products, adding that, “Because of our significant number of new drug applications (NDAs) and product approvals, we had to increase our production capacity here.”

Commenting on the U.S. generic industry, Delaney said, “Payers know that we save money in the overall pharmaceutical and healthcare industry. We are the guys who run after the brand companies – after their drugs run out of exclusivity – and then bring lower-cost products to market. Overall, there is a trend to further lower the cost of generic drugs, which, I think, will continue.”