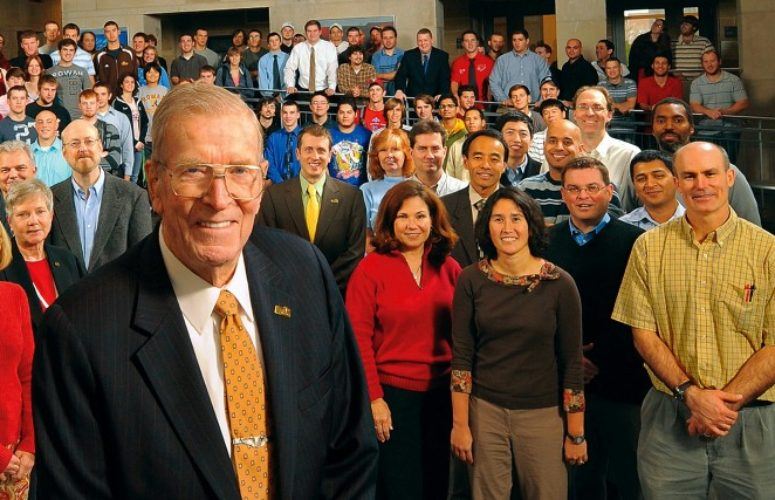 The gift, which will establish a permanent endowment exclusively for the College of Engineering, marks the second largest contribution in the University’s history. South Jersey industrialist and philanthropist Henry Rowan and his late wife, Betty, made the largest gift – $100 million – to then-Glassboro State College in 1992. That record-breaking gift had the effect of transforming the institution as it grew to become Rowan University, and it supported the founding of its nationally ranked College of Engineering. This endowment creates just the second named college at Rowan University, a major milestone for colleges and universities. The first, the William G. Rohrer College of Business, was established in 2005 following a $10 million pledge from the William G. Rohrer Charitable Foundation.

“This new, remarkable gift will ensure our continued ability to deliver a world-class engineering education,” said Houshmand. “It will support critical programs in the College, including our newly established Engineering Ph.D. program and the Henry M. Rowan Globalization Fellowship Program. It will enable us to grow our cutting-edge research programs, such as our unique virtual reality lab. Equally important, the endowment will enable Rowan University to expand scholarship support as it increases access for some very exceptional students in our region, in the State and beyond.”

The Henry M. Rowan Family Foundation last year provided funding to establish the Ph.D. program, which welcomed its first students this semester, as well as the Globalization Fellowship Program, which provides opportunities for engineering students to study and work abroad. Rowan will open its second virtual reality facility at the South Jersey Technology Park, in Mantua Township, during the spring semester, allowing it to expand work it already has undertaken with organizations such as NASA, the U.S. Navy and other public and private entities. The scholarships will enable the University to increase access for students, keeping New Jersey’s best and brightest in the State, each earning a top-quality and affordable engineering degree.

The gift comes at a time of great growth, as the College prepares to construct a new engineering building, funded in large part by the New Jersey Building Our Future Bond Act. The facility, which will enable this high-demand program to double its enrollment to 2,000 students, is expected to open in 2017. It also comes about a year and a half after New Jersey officially designated Rowan as a state research institution, thanks in large part to the work the College of Engineering conducts for business, industry and government partners and funders.

“Very soon after my parents made their historic gift, the University honored their primary request – to create a College that would transform engineering education,” said Virginia Rowan Smith, vice president of the Henry M. Rowan Family Foundation. “The College of Engineering has continued to grow in scope and prestige. This endowment will provide critical resources to ensure that Rowan University meets the increasing demands of students and their employers and that it prepares competitive students who will lead in their professional careers.”

The College of Engineering has evolved as a national leader in undergraduate education into a comprehensive College that offers unlimited opportunities for engineering education, research and innovation from the bachelor’s degree through doctoral level. Noted from its start for its hallmark Engineering Clinics and hands-on, minds-on education, the College has developed into a strong research presence as well as a standout in academics.

The College welcomed a record 375 first-year students in fall 2014 along with eight new faculty members, including the founding chair of its new Department of Biomedical Engineering. A pioneer in multidisciplinary education, Rowan University provides an engineering experience designed to educate the future engineers, entrepreneurs and inventors who will address the needs of tomorrow’s society.

“This endowment supports our commitment to educate the next generation of top engineers and to ensure that as the College of Engineering expands and evolves, it will retain its competitive advantage,” noted Dr. Anthony Lowman, dean. “The Rowans’ 1992 gift was truly a transformational one for then-Glassboro State College. This will be equally transformative for the College of Engineering, elevating the program’s stature internationally.”

The Henry M. Rowan Family Foundation has played a key role in the continuing evolution of the College and has funded a number of initiatives, including engineering scholarships.

“As we work to carry on the legacy of Mr. Rowan, we can think of no more appropriate and permanent tribute than a College of Engineering that bears his name and celebrates the lasting impact his generosity continues to have on students and on our region,” said Houshmand.

Added R.J. Tallarida, Jr., associate vice president for University Advancement and executive director of the Rowan University Foundation, “Rowan family members are among our nation’s most generous philanthropists. We are grateful that they are deeply invested in securing the future of engineering education at the University and in the region.”

Noted Smith, “We are so pleased that through this gift, the name of Henry M. Rowan will be forever associated with excellence in engineering education.”

“Very soon after my parents made their historic gift, the University honored their primary request – to create a College that would transform engineering education. The College of Engineering has continued to grow in scope and prestige. This endowment will provide critical resources to ensure Rowan University meets the increasing demands of students and their employers, that it prepares competitive students who will lead in their professional careers.”

“There’s a great demand for well-educated, well-trained engineers in all fields, and that demand is only going to grow. It’s important to the University and to my family that we meet that demand here in South Jersey, that our region takes the lead in preparing tomorrow’s engineers and inventors, the men and women who will address issues in industry, medicine, the environment and more.”

“Someone asked me why the Henry M. Rowan Family Foundation is donating $15 million after my father and mother contributed $100 million 22 years ago. That’s a complex question, but essentially it comes down to this: The University has been an excellent steward of the first Rowan gift. The engineering program has proven exceptional, surpassing what we had hoped for. There is a need to expand the College, to open the doors to more students and to help those students pay for their education. We believe this program can make an even bigger difference in engineering education, in business and in the economy.”

“Rowan Engineering has been nationally ranked almost since its inception. The undergraduate programs have been exceptional. Among other initiatives, the endowment will support the new Ph.D. Program, which will enable the University to partner with companies on solving even more complex projects.”

“We are so pleased that through this gift, the name of Henry M. Rowan will be forever associated with excellence in engineering education.”