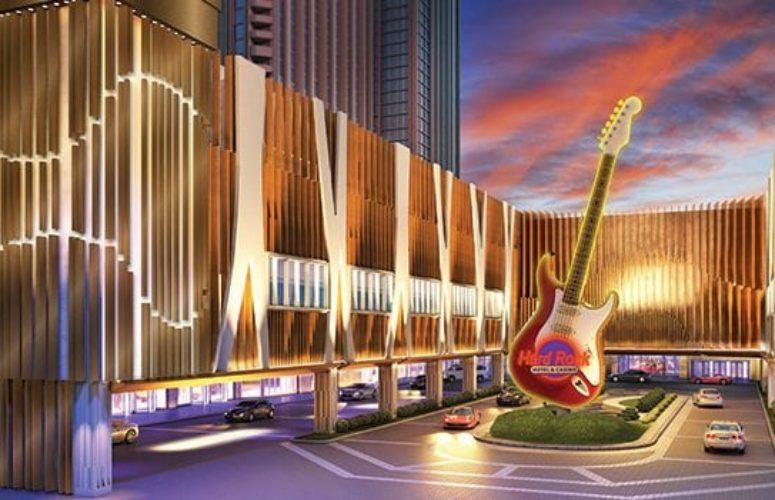 A rendering of the soon-to-open Hard Rock Casino & Hotel.

Hard Rock International Chairman & CEO Jim Allen announced that the Hard Rock Hotel & Casino Atlantic City will have its grand opening on June 28. This announcement included a star-studded entertainment lineup with more than 50 shows and events that will go on sale Friday, April 20th.  This event will create sound waves for the coastal town with over 200 nights of music, ranging from A-list artists, epic bands and headlining comedians. The unveiling of the grand opening date along with the all-star lineup and the hotel reservations announcements were revealed simultaneously at a three-city press conference in New York City, Philadelphia, and Atlantic City.

“The Grand Opening of Hard Rock Hotel & Casino Atlantic City will set the tone for a new era of entertainment in Atlantic City. Our 500 million dollar, newly reimagined property will offer something for everyone and we’re thrilled to welcome our first guests in June,” stated Hard Rock International Chairman & CEO, Jim Allen.

Hard Rock Hotel & Casino Atlantic City will be the new go-to destination for world-class entertainment, rock star service and their signature legendary vibe. The music-inspired hotel will feature dynamic culinary experiences, superstar performances, sporting events, a beach bar and a spectacular casino complete with more than 2,100 slot machines and 120 table games. The entertainment lineup set to kick off the summer will include A-list talent and performances, such as Amy Schumer and Friends, Florida Georgia Line, Kid Rock plus over 50 shows and events booked for the new casino resort.

On any given day of the year, musical talent will include artists that are leading the music scene across the nation. From Country artists like Blake Shelton, Rascal Flatts, Toby KeithandTrace Adkins to Broadway sensations, such as Rock of Ages and Million Dollar Quartet, guests will have access to a variety of genres. Legendary artists like Frankie Valli and The Four Seasons and rock favorites such as Pat Benatar,Neil GiraldoandRick Springfield, Steely Dan and Stone Temple Pilots with Bush & The Cult will all set the stage at Hard Rock Hotel & Casino Atlantic City.

Stockton to Partner with ACDevco on Student Housing in AC