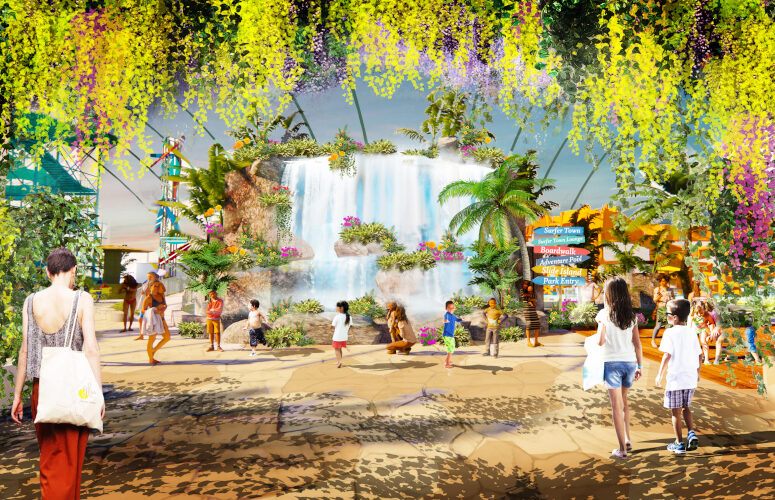 A rendering of a waterfall, which will be part of the 103,000-square-foot indoor Island Waterpark in Atlantic City
General Business

A groundbreaking ceremony was held today for ISLAND Waterpark, a 103,000-square-foot, year-round indoor waterpark being built by Philadelphia developer Bart Blatstein. Expected to be the largest indoor waterpark in the world, the complex will complement the 100,000-square-foot “Lucky Snake” arcade and sports bar at Showboat Atlantic City. These two venues underscore Blatstein’s commitment to non-casino, family-friendly entertainment in Atlantic City.

The $100 million indoor waterpark, which Blatstein hopes will open by Memorial Day weekend 2023, will feature water slides, pools and a lazy river, along with food & beverage and retail outlets, lounge areas and party rooms. A retractable glass-pane roof will cover the entire project to make it a year-round destination.

The waterpark will be constructed on the New Jersey Avenue beach block lot next to Showboat.

Bart Blatstein is CEO of Tower Investments, Inc. and owner of Showboat Atlantic City, which is operated as a non-gambling hotel.

“We are incredibly excited to begin this next phase in our development,” Blatstein said. “Atlantic City has a long and rich history as a premier tourist destination. Showboat is committed to bringing non-gaming, family-friendly entertainment back to Atlantic City, and the waterpark is one more piece to that puzzle.”

According to an Associated Press report, the Casino Reinvestment Development Authority in 2020 approved designation of the project as an entertainment retail district, which entitles it to an annual rebate of as much as $2.5 million in sales tax generated by it for 20 years. There also will be tax breaks on construction materials used for the project.