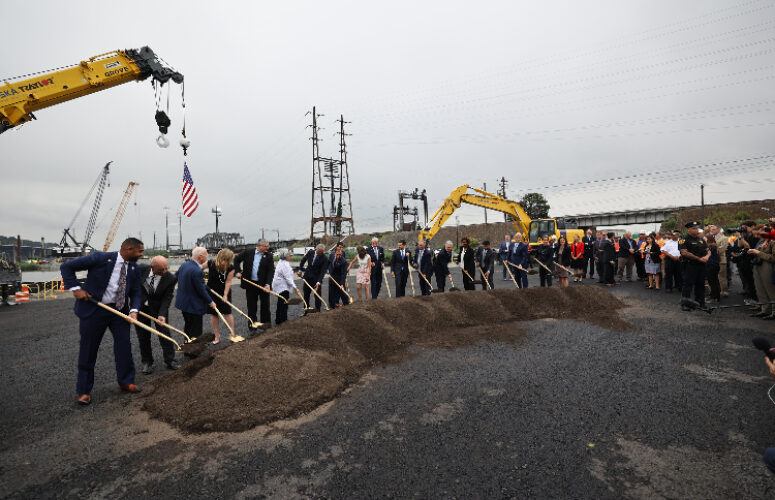 A groundbreaking ceremony was held today for what Gov. Phil Murphy called the most important infrastructure project in the entire nation: the new Portal North Bridge. The new modern fixed-span bridge will replace the current 111-year-old Portal Bridge that connects New Jersey and New York across the Hackensack River.

The existing Portal Bridge was built by the Pennsylvania Railroad and entered revenue service in November 1910. Prior to the COVID-19 pandemic, the bridge carried more than 450 daily Amtrak and NJ TRANSIT trains and 200,000 daily passengers, serving as a critical link in the congested territory between Newark and Penn Station in New York.

However, the current bridge – a two-track, moveable swing span – has proved to be a major bottleneck and source of delays, particularly when it malfunctions during opening and closing for maritime traffic. To put into perspective just how outdated the bridge is, workers often have to use sledgehammers to manually align the rails after the bridge opens and closes due to malfunctions.

The two-track replacement bridge – the Portal North Bridge – will replace the outdated relic with a modern, high-level fixed span that does not open or close, eliminating the movable components and risk of malfunction. The new bridge will rise 50-feet over the river and, including the approaches, span nearly 2.5 miles of the Northeast Corridor. Portal North Bridge is an important element of the broader Gateway Program that will eventually double rail capacity between Newark and New York.

“This project turns the Portal Bridge from a choke point to an access point. It modernizes the way that people and goods will get to and from this region that is responsible for 20% of America’s economic product every year,” said US Secretary of Transportation Pete Buttigieg at the groundbreaking ceremony today in Kearny.

The Federal Transit Administration will offset 60% of the new Portal North Bridge cost with grants. The remaining $772.4 million will be split evenly between New York and New Jersey, according to a statement from Governor Murphy’s office. All told, the entire Gateway project, which includes a new train tunnel under the Hudson River, will cost more than $14 billion.

“Today’s groundbreaking on the Portal North Bridge is a significant step in our efforts to create a reliable, world-class rail experience for travelers across the Northeast,” said New York Governor Kathy Hochul. “The Portal North Bridge is a key component of the Gateway Tunnel Project – the nation’s most pressing infrastructure project – that will spur economic development and deliver fundamentally improved travel throughout the region for generations to come.”