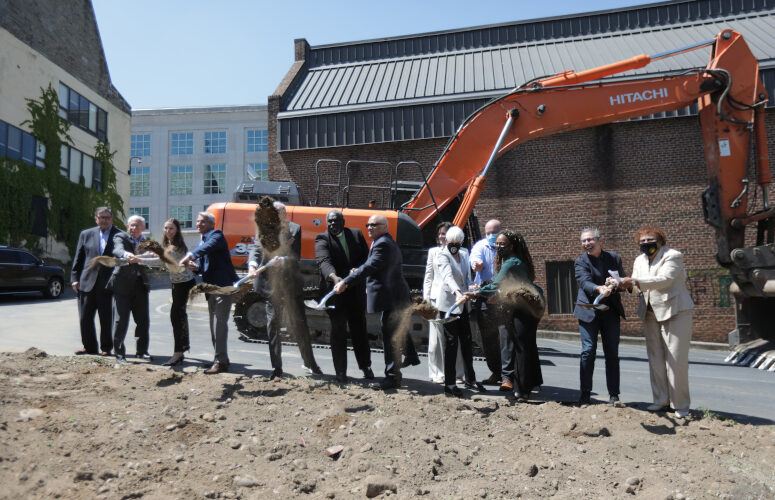 A groundbreaking ceremony was held yesterday for the historic 150-170 South Broad Street and the historic Van Sciver Building in Trenton. The project is an initiative of the New Jersey State Capital Partnership, in which the state has joined with the City of Trenton and Mercer County government to create and execute strategies for the Trenton’s revitalization and economic development, as set forth in what is known as Trenton 250 plan.

The project, being developed by RPM Development, with financing provided by the New Jersey Housing & Mortgage Finance Agency (NJHMFA), will fold The Van Sciver Building into a new community as a state-of-the art mixed-use building with underground parking, a public plaza, and premier residential amenities. Once this transformation is complete, the currently vacant site will become a hub of activity centered around 120 residential rental units and over 7,500 square feet of retail space opening onto a plaza overlooking the creek.

The site sits across the street from the Mercer County Court House, just steps from the heart of downtown Trenton, and includes three parcels making up almost 1.50 acres. Residents will be located within walking distance of a variety of restaurants, bars, retail, and transit options including bus, regional rail and Amtrak at the Trenton Transit Center (0.6 miles).

The site is also teeming with history and is adjacent to the Historic Mill Hill District, the location of the original mills of Trenton, Second Battle of Trenton, and the entry of George Washington into the city in 1789. The new building’s public promenade and plaza will seek to honor the history of the immediate surroundings. The building will include 120 residential units with one-, two-, and three-bedroom configurations. The project will have 60% of the units priced at unrestricted, market rate rents and 40% of the units will be affordable to households making 60% or less of the Area Median Income.

“This is an exciting day for the City of Trenton, Mercer County, and the State of New Jersey,” said Governor Murphy. “The redevelopment of this historically significant site, with new housing units and retail space, marks a new chapter in Trenton’s revitalization.”

“This project goes beyond redevelopment. It is community building,” said Lt. Governor Sheila Oliver, who serves as Commissioner of the New Jersey Department of Community Affairs (DCA) and NJHMFA board chair. “It preserves and honors the history of the site while utilizing a vacant space to create new mixed-use and mixed-income housing and business opportunities.”