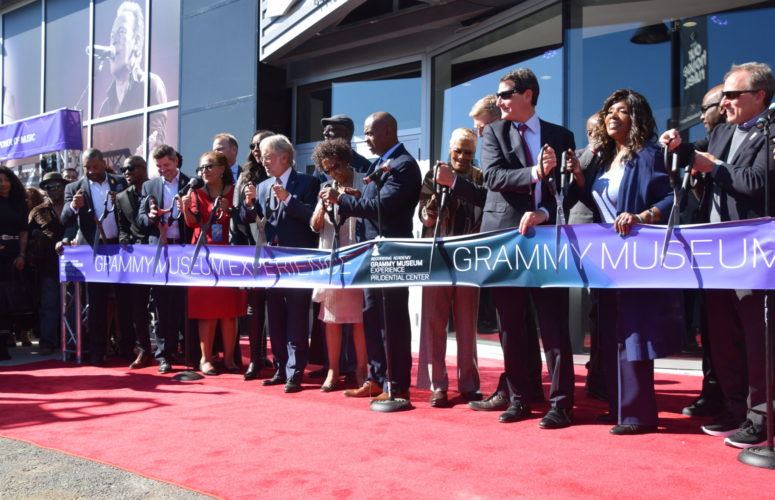 Newark Mayor Ras Baraka recalls what his father and mother told him when he was younger: “Newark is a place of jazz, of blues and of soul music, and it always should be this way no matter what we do.”

With yesterday’s ribbon-cutting and opening of the GRAMMY Museum Experience at the Prudential Center, the state’s largest city is destined to continue on this path. … not that it lost any traction through the years in delivering great vocalists and musicians such as Sarah Vaughan, Whitney Houston, Queen Latifah, Frankie Valli, Melba Moore, Woody Shaw, Connie Francis, Ice-T and more.

The new 8,200-square-foot facility, the first GRAMMY museum on the east coast, explores and celebrates all aspects of the art of music – from technology of the recording process to the legends who made lasting marks on the nation’s culture and identity. As David Blitzer, co-founder and co-owner of the New Jersey Devils and Prudential Center explained, the museum has interactive exhibits where, for example, someone can get a drum lesson from Max Weinberg of the E-Street Band, or be able to mix and remix with the music of Whitney Houston, Bob Marley or George Harrison. “This is definitely not just a walking tour,” he said.

Margaret El, special assistant for the Arts for Newark Public Schools, commented, “The GRAMMY Museum Experience shares the rich history of GRAMMY winners through interactive educational programming, and we know that it will inspire future musical geniuses right here among the students in our city and region who have great musical dreams of their own.

“Music is such a part of Newark’s DNA that creativity vibrates from its very center and pumps through the hearts of everyone who resides in this city,” she continued. “There are so many musical greats from Newark that you have to wonder what is in the water.”

Josh Harris, co-founder and co-owner of the NJ Devils and Prudential Center (along with Blitzer), said that the selection of Newark was a long shot. “New York City is the type of town that really wants a GRAMMY Museum, but Bob Santelli, founding executive director of the GRAMMY Museum in Los Angeles, and Neil Portnow, president and CEO of the Recording Academy and Chair of the Lost Angeles GRAMMY Museum Board of Directors, had confidence in us and this city to create a legacy.”

Bob Santelli, a New Jersey native, said the day was special for him, both personally and professionally. “The opportunity to bring a museum like this to Newark was a dream and was way overdue. Many years ago, a few blocks away from here, I saw my first concert. It was The Rolling Stones at Newark Symphony Hall. That changed my life. My dad, who was a New Jersey State Trooper, said that was the day he lost his son forever … I don’t regret it, quite honestly.”

Colin McConnell, chief brand officer, Prudential Financial, said that the company, as a sponsor, sees anything that enriches the cultural experience of the Prudential Center as good for the Center and Newark. “The Prudential Center in general, over the last two years or so, has been upping the game in terms of the quality and diversity of entertainment it’s bringing in. That is good for the city, and it enriches the value of the naming rights sponsorship that we have here.

“We have a big commitment to the city that goes well beyond Prudential Center,” he continued. “Newark has been Prudential’s home since its founding in 1875. That is something we never forget. We are glad to be part of the next chapter of a great story that is unfolding here.”