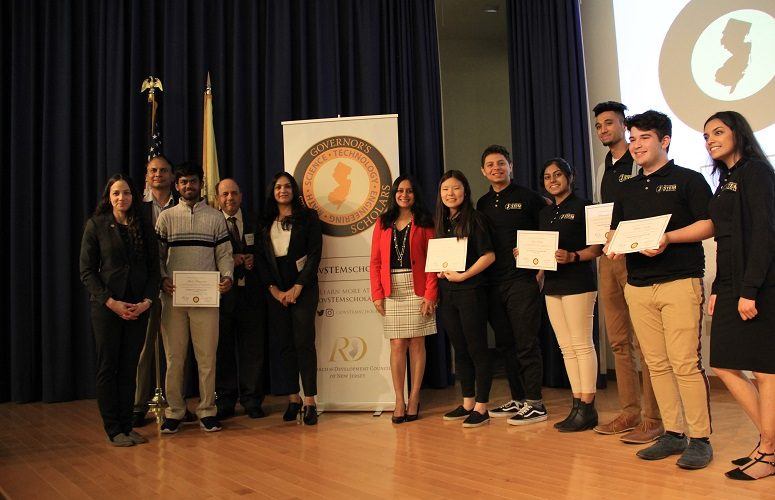 The Governor’s STEM Scholars program is an innovative public-private partnership among the Research & Development Council of New Jersey, the New Jersey Office of the Governor, the New Jersey Department of Education, the New Jersey Office of the Secretary of Higher Education, and private industries designed to immerse high-achieving STEM students in grades 10 through the doctoral level in New Jersey’s vast STEM economy and to retain that talent in the State. With 78 students graduating on Saturday, the total number of program graduates is now 342. Applications are now available for next year’s class on the Governor’s STEM Scholars’ website: www.govstemscholars.com.

To kickoff the ceremony, Kean University President Dr. Dawood Farahi welcomed the scholars.  Jazlyn Carvajal, co-founder of Stay on Your Daily, a consulting firm focused on business strategy and development for STEM industries, delivered a well-received keynote address. She stressed the importance of taking calculated risks in one’s career, reevaluating career goals regularly, and having support. Carvajal is also a co-founder of the Latinas in STEM Foundation, and the fact that she was chosen as the keynote highlights the emphasis that the program has placed on women and minorities in STEM. The graduating class was 55% female and Governor’s STEM Scholars Director Dr. Rebecca Lubot has made an effort to get the word out about the program in the State’s underrepresented communities.

After being selected through an application process, the scholars participate in year-long programming activities including the Commencement Conference, and three other annual conferences – STEM in Academia, STEM in Government, and STEM in Industry – among other events such as field trips and “in conversation with” intimate chats with industry thought leaders. They work as teams on year-long research projects.

The Commencement Conference was an opportunity for the scholars to present their research projects in front of one hundred guests. The projects’ topics ranged widely from research-related to using New Jersey-native macroalgae for biodiesel to investigating specific genes in brain cancer proliferation. One project on living space optimization used a Computer-Aided Design (CAD) program to develop a hinge that might allow for a combination bed and desk in one compact package. All projects were designed to have potential real-world impact.

Lubot stated, “After watching the scholars’ research projects progress over the course of the academic year, I am sure that these talented STEM scholars will be highly sought after by our contacts in government, academia, and industry here in New Jersey.”

Mohammad Fauzan of New Jersey City University; Michael Sanchez of Memorial High School; Manisha Persaud, Srija Patcha, and Anthony Bishara of Dr. Ronald E. McNair Academic High School; and Julia Jeong and Afnan Nuruzzaman of Bergen County Academies made up the winning team. They investigated autophagy and its regulations for neurodegenerative disorders. The judges stated that they were particularly impressed with the winning team’s clarity of presentation, cohesiveness, and their understanding of how their individual roles benefited the whole. These winning research project team members will have the opportunity to attend the Research & Development Council’s annual Edison Patent Awards in November 2019, brushing shoulders with eminent honorees. In the past, some of the honorees have been Nobel Prize recipients.

The Governor’s STEM Scholars program also gives a Civics Award to the team that makes the biggest impact promoting STEM in New Jersey, by making a difference either increasing student or citizen access to STEM, improving educational outcomes, and/or by generally acting as exemplary STEM citizens in New Jersey. This year, a tie for winning civics team occurred. Fauzan’s team won this award in addition to that of best research project. A team made up of scholars Sherouk Hassan of New Jersey City University, Meghan Flynn of the Academy for Information Technology, Sambhavi Dwivedi of Union County Vocational Technical School, George Gerber of Washington Township High School, and Jenna Bargfrede of Sparta High School also won this award. The latter team explored Clustered Regularly Interspaced Short Palindromic Repeats (CRISPR) diversity in soil samples. Fauzan’s team made brain hats and neuron models with children at the Triangle Park Community Center in Jersey City, while Hassan’s team had taught children and their parents about the importance of recycling at the Clark Public Library in Clark.

The Governor’s STEM Scholars graduates were not only praised at the local and state levels, they garnered attention at the federal level: U.S. Senator Cory Booker sent an individualized letter to each of the scholars and U.S. Congressman Josh Gottheimer congratulated the scholars via video.

Cicatiello, who, together with Research & Development Council of New Jersey Executive Director Kim Case, distributed the diplomas to the graduates, said that he is “impressed by the diversity of topics that the scholars worked on throughout the year,” and that he is “proud of the Governor’s STEM Scholars program for cultivating their talents and feeding the STEM career pipeline in New Jersey.”