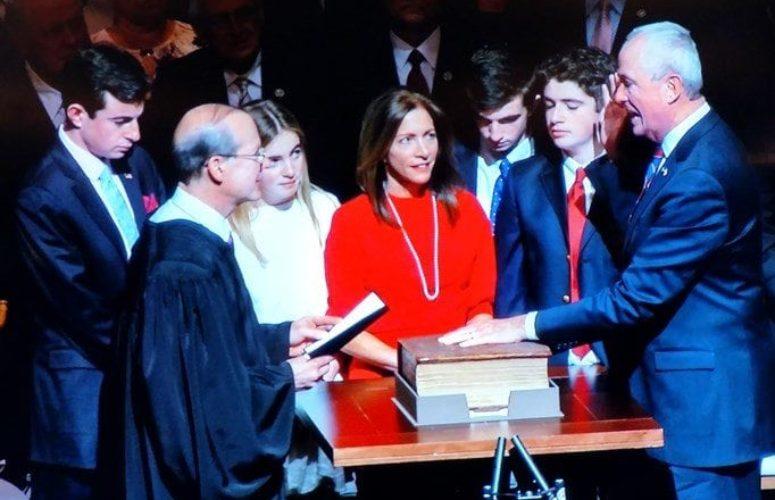 New Jersey has a new governor. Philip D. Murphy was sworn in earlier today as the 56th governor of the Garden State at a ceremony held at the Trenton War Memorial. In a speech that lasted more than 36 minutes, Murphy opened his remarks by saying that his administration will be about all New Jersey residents, their families and communities. “We will never lose sight that we are one state and one family, with different beliefs but common dreams, and that we do not succeed unless we all succeed,” he said.

Murphy said he was looking forward to working with legislative leaders in both houses of state government “in true partnership to accomplish great things for out state and its people. Our commitment to finding common ground across the aisle is genuine. I know that if we forge our future together, we will get there faster and stronger, and it will last longer than if we go it alone.”

Murphy said voters elected him with a mandate to build a strong and fairer state, and he gave numerous examples in which New Jersey can become so.

“A stronger and fairer New Jersey is rooted in an economy that creates better jobs and provides higher wages … that creates places where industries can grow and communities can rise, where innovative companies are born and where millennials want to live and where seniors want to retire,” he said.

He mentioned that a “stronger and fairer New Jersey funds its public schools and delivers on the promise of property tax relief … makes a four-year college more affordable and provides free access to community college … and, creates new training programs to prepare residents for jobs in an innovation-driven economy.”

New Jersey Business & Industry President and CEO Michele Siekerka issued the following statement: “We congratulate Governor Murphy and wish him, his administration and his family all the best on this historic day. NJBIA looks forward to having a seat at the table with the governor and his staff regarding policies and issues that impact our businesses and residents, including affordability, economic development and taxation, regional competitiveness and workforce development.”

He said the state must create tools for small businesses … and women, veteran, and minority-owned businesses … so that they “thrive instead of delivering massive tax breaks to a handful of select and connected big corporations that don’t need them in the first place.”

Discussing the choices he made in selecting his cabinet members and others on his leadership team, he said the group he now has in place “looks like the state we now proudly serve.”

“Our cabinet reflects the great diversity of our state, among them the first Latina to lead the Department of Banking and Insurance, Marlene Caride; the first Muslim-American cabinet official in state history in Dr. Shereef Elnahal; the first African-American — and first minority — to lead the New Jersey National Guard, Adjutant General Jemal Beale; and, in Gurbir Grewal, the first Sikh-American Attorney General in our nation’s history,” Murphy commented.

Full of optimism, Murphy said he could feel the intense energy for a stronger future.

“I hear the excitement from the heads of the technology incubators where start-up companies begin. … I see the pride at construction sites where union workers are building exciting new spaces where residents will work, learn and live; in our schools where educators are preparing the next generation of New Jerseyans; and, in the neighborhoods where police and fire departments are protecting both their neighbors and complete strangers,” he said.

The governor said the state did not have to wait a handful of months for a budget to be proposed and adopted before changes could occur, saying:

“To my partners in the Legislature: I ask you to send me the bills, among others, to reaffirm our support for women’s health and Planned Parenthood; to raise the minimum wage to $15 an hour; to promote equal pay for women; to give every worker the peace of mind of earned sick leave; to tear down barriers to voting; and, to strengthen our gun laws.

“And, I promise you now that they will be met with a signing ceremony instead of a veto pen.

“We don’t have to wait to make our economy stronger and fairer, to attack income inequality, and to protect and grow our middle class. That’s why, later today, in one of my first official acts, I will sign an executive order promoting equal pay for women,” he said.

Touching upon challenges from Washington, D.C. and the Trump administration, the governor said the state will “resist every move from President Trump and a misguided congressional leadership that would worsen income inequality; or divide families or deny access to college for our Dreamers; or defund essential infrastructure; or gut healthcare for our children, seniors and the working poor; or provide a tax windfall to giant corporations and billionaires at the expense of our working and middle-class families.”

Murphy, an Irish-American Catholic who grew up in the Boston area, was honored to place his hand on the same bible used by John F. Kennedy when the latter took the oath of office of president of the United States back in January 1960. In fact, this was the first time the Kennedy bible has ever left the Kennedy Presidential Library.

Near the end of his speech the governor quoted Robert F. Kennedy, whose model for service, he said, inspires him today. Kennedy, at Cape Town University, said: “Few will have the greatness to bend history itself; but each of us can work to change a small portion of events, and in the total of all those acts will be written the history of this generation.”

Murphy’s closing remarks were a call for cooperation and bipartisanship: “So now the page has turned, and the pen is in hour hands. Let us, together, write this history,” he said.

Oliver, whose mother and brother stood next to her as she took the oath of office for Lt. Governor, said it was ironic that the ceremony took place a day after Martin Luther King Day. As an African American, she said, this is a reminder that it has taken since the days of our independence to today “for New Jersey to have a woman of color serving in a statewide elected office.”

She said she will bring vigor to the Department of Community Affairs, where she will serve as commissioner. She called for affordable and safe housing, getting Atlantic City back on its feet and free of state intervention and looks forward to working with the Legislature to create “a fair and stronger New Jersey that the Murphy administration is committed to building.”

After the event, a number of business organizations commented on Governor Murphy’s speech.

For example, Debbie Hart, president and CEO of BioNJ, the state trade association representing the biotech/life sciences industry in the state, told New Jersey Business, “I am inspired by this new governor and his outlook on the world. I think he sees untapped opportunity, and certainly in the biotechnology field there is plenty of that. I look forward to working with the new governor and his administration to help tap it.”