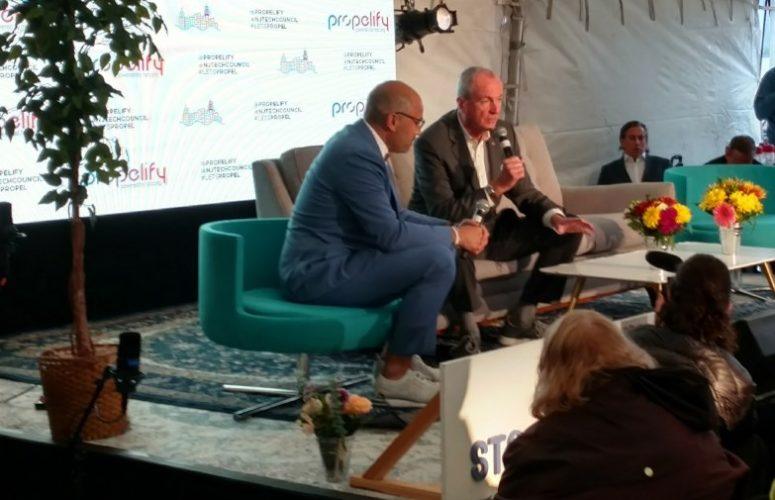 Hoboken was host today to the 2019 Propelify Innovation Festival, an event in which more than 8,000 entrepreneurs, tech startups and investors gathered on the city’s waterfront at Pier A to network and make deals. State government and academic leaders were also on hand touting everything New Jersey is offering within its innovation ecosystem.

Aaron Price, the Propelify founder and the recently installed CEO of the New Jersey Tech Council, said the day was about “propelling entrepreneur’s ideas and turning them into reality and action.” He told New Jersey Business, “What we have here is an opportunity for people to accelerate their businesses and careers in one day. We have investors here, we have talent here, we have companies hiring, companies investing, companies acquiring. Our goal is to make sure people leave here with opportunities. This event is not a day off for attendees, but a ‘day on!’”

Price said Propelify’s mission is to surround the community with the resources needed to support the entire innovation lifecycle. Connecting innovators with investors, this ultimate tech networking festival can be a key cog in New Jersey’s mission to foster a glowing innovation economy.

Price asked Gov. Phil Murphy numerous questions about the condition of New Jersey’s startup environment and his administration’s initiatives to improve it.

Murphy said his efforts are about “looking in the mirror and being [realistic] about what you are and are not. We are not a low cost state in which to do business, but we are a state that reeks of talent, has the DNA for the innovation economy, and has a great location.”

In raising the bar for the state’s tech community, Murphy said one element of his administration’s game plan is to deepen the relationship between institutions of higher education and research universities with the real economy.

“That’s the play-book for many tech sectors in other states,” Murphy said. “There is no reason why we can’t collectively not only read from the same playbooks but [surpass] other states.

“I believe it is not only realistic, but it is happening already,” he said.

“While we may rip pages from other people’s playbooks, in the aggregate, New Jersey’s playbook will be unique to us … it will include some of our [Jersey] attitude.”

Besides talent and location, Murphy believes government policy needs to “put wind in the sails of entrepreneurs and business in general. Government isn’t going to be the answer for all of our hopes and dreams, but we could clearly put jet fuel into our aspirations … and I think we are doing it uniquely in New Jersey.”

As for what state government is doing, Murphy pointed to the restructuring of the Angel Investor Tax Credit program, updating the R&D Tax Credit program, and introducing the NJ IGNITE program, which provides rent support to incubators and startup companies so that entrepreneurs can “focus on R&D and product development” Murphy said, rather than overhead costs.

The governor also discussed the NJ Innovation Evergreen Fund, which is still being worked on in the Legislature. In concept, NJIEF would raise approximately $250 million in capital by competitively auctioning new state tax credits to New Jersey corporations that want to participate in the innovation economy. The fund would then invest the auction proceeds, alongside at least $250 million in funds from venture capital firms, into promising startups with the potential to scale up and create jobs.

“We haven’t gotten the bill through the Legislature yet, but it is making good progress,” Murphy said. “When it goes through, it will be a ‘one-of-a-kind’ program in the country.”

Asked about this week’s introduction of the website, Business.NJ.gov, which is described as a “Business First Stop web portal,” Murphy said, “One of the things we heard on the campaign trail and hear today is that the state, at its worst, is right up there on the red tape bureaucratic front.” To lessen the bureaucracy, “we have been taking feedback and figuring out how we could put together one door for [entrepreneurs and companies] to go through if they want to start, expand or move their business in New Jersey.”

Stressing again that New Jersey isn’t going to be a low-cost state, Murphy did say it is a “good value for your money state,” and that it also wants to be the “good values state,” in terms of environmental awareness and supporting the LGBTQ community, women’s health issues, sensible gun safety laws, and the treatment of immigrants. “You don’t make economic progress without social progress. It’s not an either/or choice,” he said.

Overall, the governor said there is a perfect storm in New Jersey between talent, location, and government policy. One thing he has learned is that is cheaper if a company is born here compared to getting them to come here. “That is why startups matter so much,” he said.