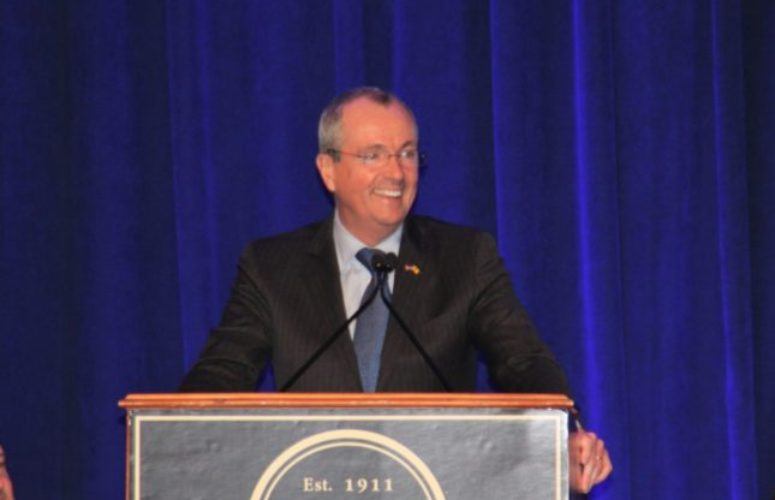 Washington, D.C. – Underscoring a widely held sentiment, New Jersey Gov. Phil Murphy last night told an audience of Garden State business leaders that the cost of residing and doing business in the state has increased, while the “basket of what we got back has shrunk.”

He added that the “good value-for-money equation must be bought back into balance” and, on a related note, he remembered how the state had originally grown its powerful innovation culture, citing examples ranging from Alexander Hamilton and Thomas Edison, to Bell Labs and the emergence of the state’s biosciences sector.

Murphy reminded the audience, “New Jersey literally invented the modern world. To once again lead, we must re-claim our heritage. We were, after all, Silicon Valley before there was a Silicon Valley.”

Murphy said the concept of the new federal tax law’s Opportunity Zones can be expanded upon via Innovation Zones, “where transformative high-tech businesses can take root in [New Jersey] incubators and accelerators where businesses are born.”  Murphy noted that New Jersey now has 15 startup incubators while New York has 179.

He added that the New Jersey Economic Development Authority “will be the partner small businesses and startups need, with the right focus in making the right investments for our future growth.”

Murphy additionally told the audience that he will “fight tooth and nail” for the Gateway Project, a rail improvement project impacting the Northeast Corridor. He embraced, in effect, massive collaboration to achieve this goal.

He added, “I do not believe I am exaggerating when I say no single project is as critical not just to our state’s economy, but to our national economy. We must get this done.”

He also discussed implementing the millionaires tax, commenting, “Do we continue to hollow out the very core of our state, or our society, or do we ask the wealthiest and the biggest corporations to pay their fair share? … Only through tax fairness can we once again be a state that delivers more and invest in the things that benefits business and families.”

Murphy said he would consider eliminating the millionaires tax down the road if the economy grew.

“Just as sure as we will reclaim the progressive soul in this state, we will grow this economy again – and there is no higher priority,” he said.

New Jersey Senator Cory Booker also addressed the audience, and, in part, bemoaned the fact that although the millennial generation is growing in other states, it is leaving New Jersey – echoing the results of the New Jersey Business & Industry Association’s recently-released Postsecondary Education Task Report.

He said, “New Jersey, therefore, is missing out on the next generation of workers, entrepreneurs, and innovators. New Jersey is losing its hold on what is the best guarantee that we have a great future. We know there are things that we can collectively do to address that.”

More specifically, Booker thought that could involve, in part, investing in infrastructure and small to mid-sized companies, both of which are important to millennials.

He added, “We know that focusing on county colleges, and innovation and technology training, can help people stay here and build jobs.”

Both Governor Murphy and Senator Cory Booker spoke at the NJ Chamber of Commerce’s 81st Congressional Dinner, held at the Marriott Wardman Park Hotel.  A 13-car chartered Amtrak train ferried most of the audience to Washington, DC.