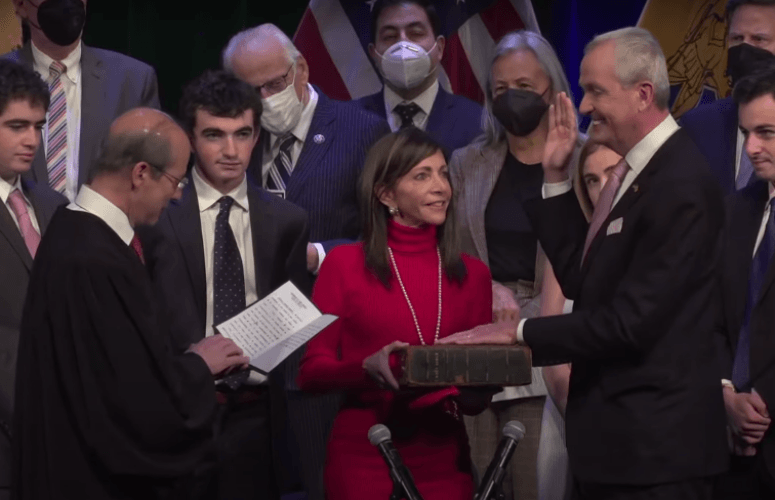 Gov. Phil Murphy was sworn into office today, officially becoming the first Democratic incumbent governor to to serve a second term in New Jersey in 44 years.

A week after delivering his 2022 State of the State address, in which he pledged no tax increases and touted first-term accomplishments such as raising the minimum wage and bolstering the state’s offshore wind industry, Murphy acknowledged one of the state’s most pressing issues: affordability.

“[The people] want a New Jersey that listens to them,” Murphy said. “[They want] a New Jersey that is more affordable, especially when it comes to three of the biggest expenses facing their family – healthcare, higher education, and property taxes.”

Murphy, who narrowly fended off Republican challenger Jack Ciattarelli on Election Day, said that while property taxes are not set by the state, the decisions and investments made by his administration directly impact their trajectory.

“Every dollar of new state funding for our schools and communities, for local roads and libraries, and for countless other areas, is a dollar that stays in your pocket as a property taxpayer. Using this mindset, each of our administration’s first four years have ranked among four of the lowest year-over-year increases in property taxes on record. But I’m not going to be satisfied with just slowing property tax growth. I want to get us to a place where we can begin to see them go down,” he said.

Despite the slowdown of property tax growth, New Jersey still ranks No. 1 in the unenviable position of having the highest property taxes in the nation.

Lt. Gov. Sheila Oliver, cementing her second term, echoed Murphy’s sentiments, saying, “I still see the need for more affordable places for families to call home in New Jersey. I still see seniors and working families fearful of their ability to heat their homes this winter, and I see municipal leaders looking to us for guidance as they work to improve the towns they represent and better serve their residents. I promise you we will not walk away from any commitments we have made.”

New Jersey Business & Industry Association (NJBIA) President and CEO Michele Siekerka said, “While we congratulate the governor today, we also must continue to stress our ongoing concerns with policies that strike against affordability, hurt regional competitiveness, and add more burdens to business, as we saw with several of the bills signed into law today. These are

examples of ongoing policies that will further challenge our business climate.”

One of these bills is A-1659/S-1559, which establishes the New Jersey Insurance Fair Conduct Act, also known as the “Bad Faith” bill. Siekerka said that while the bill was portrayed as an effort to ensure that auto insurance companies act in good faith, there are already legal mechanisms in place to do so.

“Instead, this law will now open the floodgates for lawsuits that tip the balance of negotiating power into the hands of plaintiff attorneys, no matter the merits or frivolity of the case,” she said, adding that the bill will lead to a significant rise of costs to insurers, which will result in the inevitable rise in auto insurance rates for New Jersey residents and businesses.

“We hear our policymakers talk about prioritizing affordability amid the highest property taxes, the highest corporate business tax and one of the highest income tax rates in the nation. In seeking a solution without a problem, this law (A-1659/S-1559) will now add to the burdens of New Jerseyans across the board,” Siekerka said.

“NJBIA looks forward to continuing to have a seat at the table with the Murphy administration regarding policies and issues that impact our businesses and residents, particularly as we emerge from the pandemic,” she added.