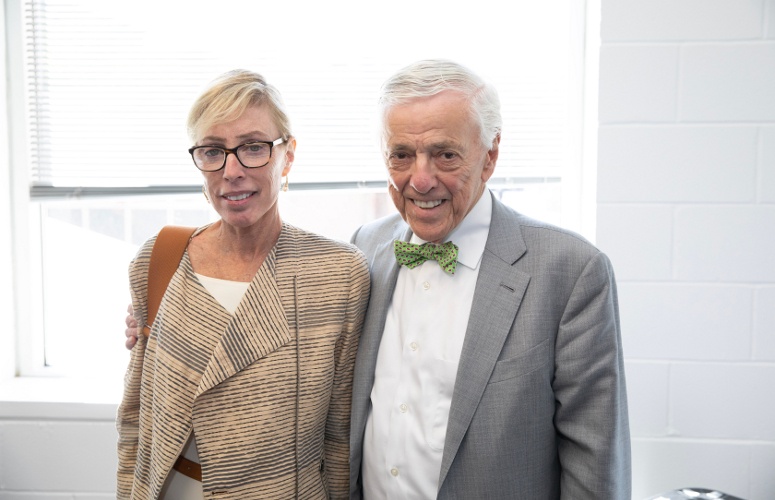 New Jersey Institute of Technology (NJIT) has renamed its College of Architecture and Design for J. Robert and Barbara A. Hillier to reflect the globally renowned architects’ historic donation to the university.

Their gift, the university’s largest ever, will enrich the architecture and design program in many ways: with scholarships that diversify the pool of talented architects entering the profession and funds for the technology that will advance it, to name just two.

“Bob and Barbara Hillier are very aware of where the fields of architecture and design are today and where they’re going in the future. They’re living it,” said NJIT President Joel Bloom at the renaming ceremony, held in Weston Hall on May 21, directly following the university’s 2019 commencement. He then thanked the couple for “the faith you’ve placed in the College of Architecture and Design to carry the name of J. Robert and Barbara A. Hillier.”

The Hilliers, Princeton-based architects who built one of the country’s most comprehensive and successful practices with a mix of design skill, niche savvy, marketing acumen and old-fashioned attention to their clients’ needs, say it was NJIT’s technology-enhanced focus on the future that inspired their philanthropy.

“NJIT is very much of a research facility and forward-thinking in everything they do. I believe that today, architecture needs that look forward more than looking back,” commented Robert Hillier, who said he first took note of NJIT’s approach when he discovered several years ago that the university’s architecture program was one of the first in the region to incorporate computer-aided design (CAD) into the curriculum.

He added, “They were also doing more computer design and product design than other schools. I think that taking architecture as a program and expanding it into other related design fields is important.”

Barbara Hillier, who credited the university with having “the energy and the discipline to embrace their students of all levels, which is oftentimes not the case,” said that scholarships will make an NJIT education available to people who may not otherwise aspire to one. Both she and her husband cited NJIT’s “commitment to first-generation college students” as a strong motivator for them.

“This is a transformative moment in the history of the college,” noted Anthony Schuman, the interim dean. “The Hilliers’ gift expresses confidence in the school, brings new energy to its students and faculty, enhances our reputation in the public arena and provides material resources that will help us grow.”

Just over a decade later, he hired Barbara, who in 1988 established a new office – and soon-to-be thriving practice – in Philadelphia. The firm went on to open offices in New York, Newark, Washington, Dallas and Tampa. In 2007, Hillier Architecture merged with RMJM Group of Edinburgh, Scotland, creating one of the world’s largest firms with 1,200 employees.

Two years later, the couple struck out on their own to found Studio Hillier, less than a mile from their former practice’s original location.

In total, the firm completed projects in 27 states and in 34 foreign countries, including the design of 17 private international schools. The Hilliers are currently working on a total resort town in the Bahamas that will have a net zero carbon footprint. Their work has received more than 300 state, national and international design awards.

Despite their own phenomenal success, the couple nonetheless believe their profession faces serious challenges from other sectors, such as real estate and the construction industry, which are moving swiftly to incorporate technology that enables them to create designs and showcase them. Their gift to NJIT has been made, in part, to ensure that architects retain their central role in shaping the built environment with, as Barbara Hillier puts it, the “humanity” that is an essential part of the profession’s mission.

In addition to their strong Princeton ties – Barbara Hillier also has a master’s degree from Princeton University and their former firm designed several buildings on that campus – the Hilliers have a longstanding connection with NJIT. For one, their firm designed all three versions of the School of Architecture, which was established in 1974.

Robert Hillier recalls being taken up to an attic gymnasium in the 1970s and given this challenge: “This is the drafting room, make it a school.” There were only about 25 students at the time.

Later, the firm renovated another space to accommodate the rapidly expanding program, and then in the late 1990s, designed the modernist Weston Hall, the home of the school today. It was configured “so you could see how the building was built as you walked through it. It also showed what you could do with basic industrial materials and still create dramatic and interesting spaces,” he said of the building, noting in particular its bright colors, its glass-plated view of Martin Luther King, Jr. Boulevard and the “wonderful stairway that sort of wanders up three stories.”

Both Robert Hillier and his father James, chief scientist at RCA and the developer of the first operating electron microscope in the world, have received honorary degrees from NJIT. Robert served as the first chairman of the Albert Dorman Honors College Board of Visitors and endowed a scholarship in honor of his first daughter, who died in a car crash in 1984.

Having watched NJIT and the city of Newark evolve over the past several decades, the Hilliers are enthusiastic about both. They look to architects trained at the university to play a role in shaping what they call a “Renaissance City,” while making key, life-improving connections for the people who live there now.

“It’s time to rethink the urban landscape and value what every citizen can bring to the effort,” Barbara Hillier noted in brief remarks at the ceremony. “Architecture must take a strategic role in leading the discourse among the many.”

As Robert Hillier puts it, “NJIT is sitting in a city that literally could become a petri dish for how cities rebirth themselves.”