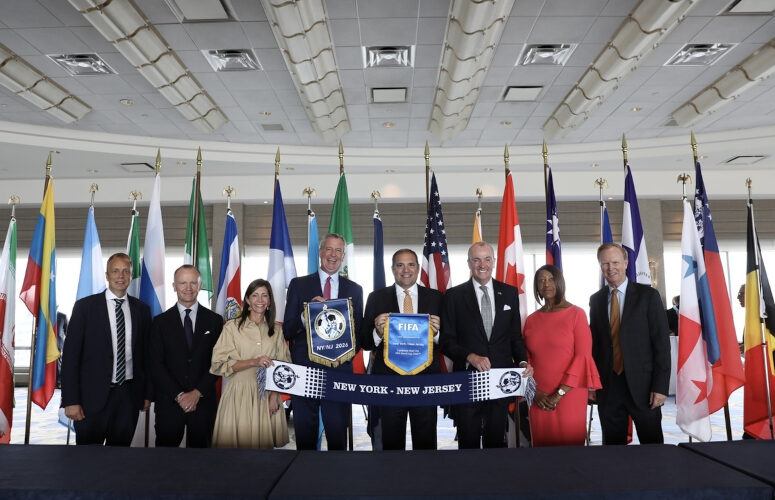 The delegation was led by FIFA Vice-President and Concacaf President Victor Montagliani and Colin Smith, FIFA chief tournaments and events officer, and included FIFA experts across multiple fields, including venue management, stadium and city infrastructure, team facilities, commercial, bidding, and legal. Representatives from the U.S. Soccer Federation, along with representatives from the Canadian Soccer Association and the Mexican Football Federation, also joined the delegation.

New Jersey and New York City presented a joint bid for the 2026 FIFA World Cup with the goal of once again bringing one of the greatest sporting events in the world to East Rutherford.

“This is an immensely exciting opportunity to showcase our great state to an international audience,” said Governor Murphy. “The FIFA World Cup is among the premier sporting events in the world and MetLife Stadium is among the country’s best, so we’re excited for the chance to bring the two together.”

“New York City and New Jersey have all the assets we need to host an unforgettable World Cup: world-class, accessible facilities, a truly global population of fans, and the best tourist destinations on the globe,” said Mayor Bill de Blasio. “I’m proud to welcome FIFA to the region and I look forward to many more productive conversations in the coming months.”

The NY/NJ Host City Bid Committee also launched a campaign entitled “Welcome, World” highlighting the region’s passion for the sport and desire to be an official 2026 FIFA World Cup Host City.  The welcome video can be found here.

“New Jersey has the experience, commitment, and state-of-the-art facilities needed to host the 2026 FIFA World Cup. Our state has a rich history with soccer,” said ChooseNJ CEO, Jose Lozano. “Over the years, MetLife Stadium has successfully hosted record-setting international soccer matches thanks to our strategic location, unparalleled transportation access, and world-class amenities. New Jersey and New York are ready and excited to host this extraordinary event.”

“The New Jersey Meadowlands has played host to the world’s largest and most prestigious events,” said Jim Kirkos, president and CEO of the Meadowlands Chamber. “We are all thankful to FIFA for considering us and we are anxious to provide a “NJ Warm Welcome” to the many fans from around the world who will come to the 2026 FIFA World Cup. We know how to do BIG…and experience matters.”

The U.S last hosted the FIFA World Cup in 1994, and Giants Stadium played host to seven games, including a quarterfinal and semifinal match.

“MetLife Stadium would be honored to host matches in 2026. Our world-class stadium is the perfect showcase for the greatest players and the biggest global sporting event taking place in New Jersey,” said MetLife Stadium President and CEO Ron VanDeVeen.

Other U.S. cities in the running to host matches are Atlanta, Baltimore, Boston, Cincinnati, Dallas, Denver, Houston, Kansas City, Los Angeles, Miami, Nashville, Orlando, Philadelphia, the San Francisco Bay Area, Seattle, and Washington, D.C. In addition to the U.S. cities, Canada is featuring Edmonton and Toronto as host cities and in Mexico, they are featuring Guadalajara, Mexico City, and Monterrey. The 2026 FIFA World Cup will be the first ever jointly hosted by three nations. The final decision is due early next year.