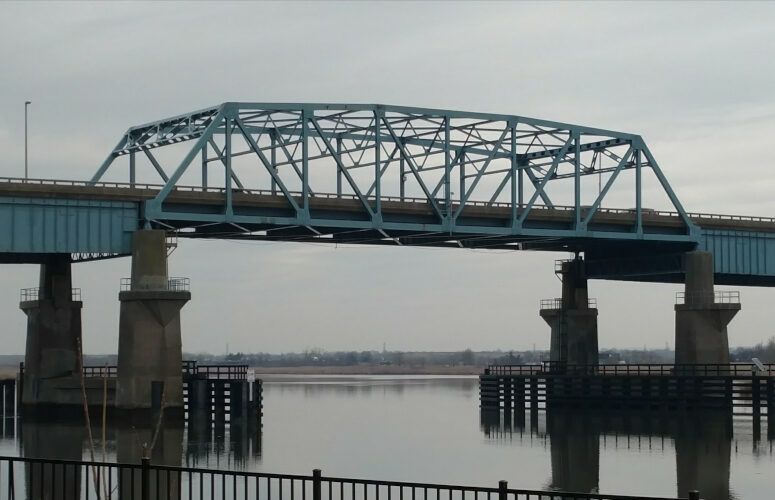 The Route 3 Bridge over the Hackensack River at the Meadowlands.
Infrastructure

New Jersey’s first major infrastructure project that is a direct result of the federal $1.2 trillion Infrastructure Investments and Jobs Act (IIJA) was announced today. The eastbound span of the Route 3 bridge, which crosses over the Hackensack River at the Meadowlands, will be rebuilt at a cost of $143.6 million.

At an outdoor press conference with the 88-year-old bridge towering in the background, US Senator Bob Menendez said there are 500 bridges in New Jersey that are in a state of disrepair, including the Route 3 bridge. Approximately $229.4 million in fiscal year 2022 will be used to repair these structures. Over the next five years, more than $1.1 billion from the IIJA will be used to fix these bridges.

Overall, New Jersey is expected to receive $12 billion in funding via the IIJA. Menendez said this will include $6.8 billion in highway funding and more than $4.1 billion in transit funding.

“The IIJA is the largest investment in America’s infrastructure since the creation of the federal highway system in 1956. So, this is beyond a generational investment,” Menendez said.

According to US Senator Cory Booker, the IIJA “puts a shadow over what Eisenhower did” via the Federal Highway Act, which authorized the spending of $25 billion for the construction of a national interstate highway system.

“New Jersey will now start to reap the benefits of infrastructure investment. We have brought home the resources … we are investing it in our state … and when you invest in roads and bridges, you not only create jobs, but you also expand opportunities for businesses through economic growth,” Booker said.

According to Ray Pocino, vice president and eastern regional manager of the Laborers’ International Union North America (LIUNA), the Route 3 bridge project will support 1,859 jobs both within and outside the construction industry. Meanwhile, the additional $1 billion dedicated to New Jersey bridges via the IIJA is expected to create another 13,000 jobs.

Menendez mentioned that New Jersey’s congressional delegation is working diligently to secure billions of dollars in competitive funds to complete the $12.3 billion Gateway tunnel project, which recently received an increased rating of medium-high from the Federal Transit Administration.

However, Congressman Bill Pascrell (D-9) took a harder tone in discussing federal moneys coming to New Jersey: “We will be relentless in attempting to bring home what is ours,” Pascrell said. “We pay a lot of taxes in this state to the federal government, and we have every right to fight for every dollar and invest it in New Jersey.”