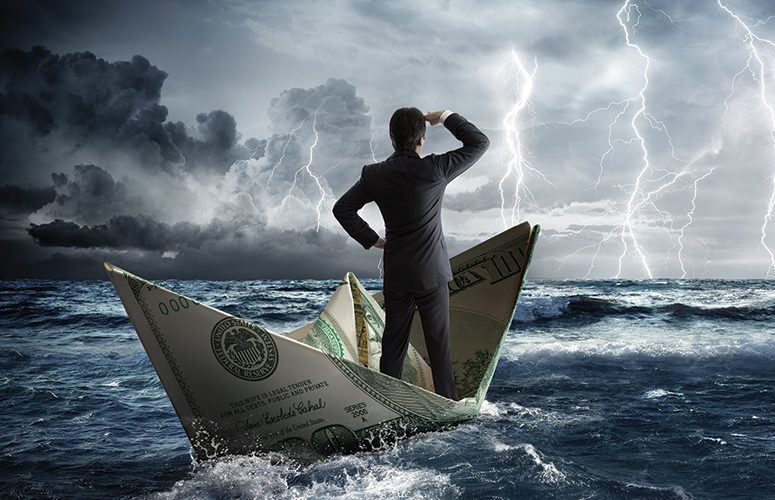 With the stock market in a tailspin, businesses closing their doors and unemployment claims rising at levels not seen since the Great Recession, the multi-faceted economic impact of the coronavirus pandemic has economists saying a recession cannot be avoided, and that the world may be in one already.

Although two quarters of negative GDP growth (the traditional benchmark for a recession) have not yet passed, Bank of America economists today said they believe the US economy is in a recession and that US GDP will collapse by 12% in the second quarter.

More locally, Ryan Sweet, director of real time economics at Moody’s Analysts, says, “We are in a very similar situation from a forecasting perspective as we were back in 2008 and 2009 (during the Great Recession). Things are happening rapidly and we have to make adjustments to our forecasts.  With each passing day, the economy is losing a tremendous amount of output. It will contract in the second quarter. There will be a sharp decline in GDP. Consumer confidence is beginning to decline. I don’t want to say we are in a recession yet, but it is going to be difficult to avoid one.”

“There is no way we could avoid a short-term recession, says economist Jim Hughes, professor and Dean Emeritus of the Edward J. Bloustein School at Rutgers University. “Economic activity is going to shutdown substantially both nationally and in New Jersey. We are in a period of negative economic growth and probably have been these past two weeks.”

Hughes says a “V-shaped” recession may be experienced, meaning a steep economic decline followed by a steep rise in the second half of the year. “However, this is assuming that the health crisis ameliorates. There could be a very strong economic bounce back because there will be a lot of purchasing power out there,” he says, but adds, I don’t think we will be going back to [stock market] record highs.”

Discussing the impact of federal economic stimulus packages, which include sending payments totaling $500 billion to citizens ($1,000 per person and $500 per child); $300 billion for small businesses to ensure they keep workers on the payroll (this measure consists of loans for up to six weeks of employee payroll not to exceed $1,540 per employee; upon receipt of the loans, a business must promise to pay their workers for two months); a $100-billion coronavirus aid package which includes provisions for emergency paid leave for workers; and $50 billion in secured loans for the airline industry, among other initiatives, Sweet says it’s key that the packages be “targeted, timely and transitory. Targeted meaning it helps those who are being significantly affected, mostly small businesses and people who have been laid off.

“We need to get aid to small businesses very quickly,” Sweet says. “With social distancing measures and non-essential businesses shutting down, many of these businesses don’t have the financial resources to weather the blow that will last for weeks or months. I think the fiscal stimulus is needed. … It will not solve all the problems, but it will cushion the blow to the economy.”

Hughes also says the stimulus is definitely needed for those feeling the “fiscal strain,” meaning businesses that have closed or curtailed their operations such as hotels, restaurants, various retail stores and more, plus their employees living paycheck to paycheck. “They are feeling the strain and that will have a negative impact on the economy,” he says. “The financial plans coming out of Washington realize that’s the case.” Additionally, Hughes adds that “people who will do well, for the time being, are those who can work from home.”

Regarding the stock market’s fall, Sweet, who says he cannot give financial advice, comments, “This is an enormous shock. The market has gone down tremendously. Don’t look at the market [your investments] if you [are young] with a long-term investment horizon. What is disconcerting is thinking about baby boomers and those who are close to retiring. This is having an enormous effect on them. … The stock market is not going to stabilize until we get on the other side of this.”

Overall, Sweet says the economy will recover, but “I don’t think it will spring back to normal in three months. It will take time.”

Meanwhile, Hughes says he his cautiously pessimistic. “Hopefully, we will have a V shaped recession, but we have never been through anything like this.”