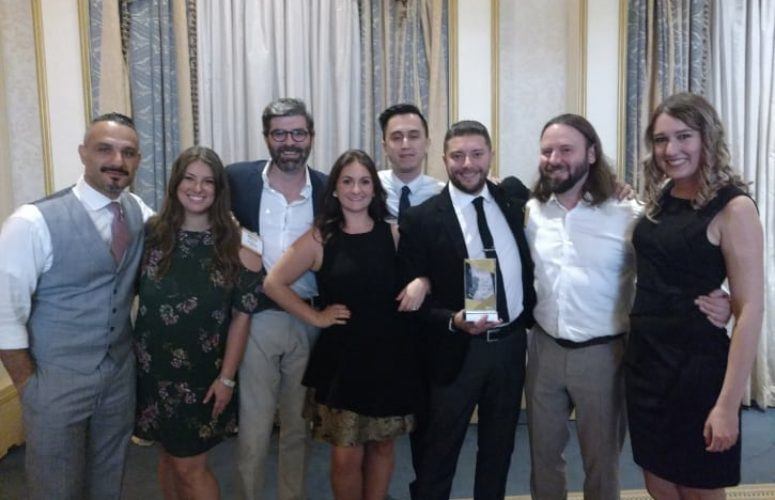 Among the winners receiving awards at the event, held at The Grove in Cedar Grove, was Mahwah-based DSM Group, which won a total of six awards, two of which were for the creation and development of the New Jersey Business & Industry Association’s “Big Shot” campaign. Specifically, DSM won the “Best of Social Media” and 1st place “Social Media Promotion, Inventive Program of Contest” categories for the Big Shot project.

Thrilled at winning the award for Big Shot, Leon Grassi, vice president of sales and marketing at DSM, told New Jersey Business at the event, “As a creative marketing agency, we are always striving to find a project where we can bring in every facet of the organization together to come up with a great concept. NJBIA’s Big Shot campaign was that type of project. This campaign is a product of group brainstorming and genuinely having every piece of representation – from a specialty standpoint at DSM – in the same room in order to come up with a cohesive idea.

“It is almost vindicating to know that you could put all of these people in a room to get an idea that ultimately yields great results for our client that was so much fun to execute,” Grassi added.

The NJBIA’s Big Shot Campaign, which launched on October and ran until January, was a video competition in which business owners were asked to describe their ventures and briefly explain how they would use $15,000 in capital, to be awarded by NJBIA, to take their business to the next level. In addition to the funds, the winning business would also receive an all-day business consulting session with experts from the fields of accounting, energy, finance, healthcare, law, marketing, employee training and disability insurance.

The winning company was South Jersey-based Kingsway Learning Center, a special education school that was looking to start an adult program and expand its facilities.

“We had the right client for this project (NJBIA), the right masters of ceremony (CEO and business consultant Mike Luzio), the right platform, and the right team behind the project … everything fell into place,” Grassi said.

“Best of Show” honors last night went to Paramus-based Giovatto Advertising for Broccoli (Cannabis World Congress & Business Expo). The agency also won Best of Television/Video for the same campaign; a 30 second commercial that substitutes the word “broccoli” for cannabis to promote the business-to-business trade show for the legalized cannabis industry. Because cannabis is still banned by the federal government, advertising for the CWCB expo was difficult, according to the agency. Many networks were hesitant to run a pro-cannabis commercial even when discussing it in a legal/medical way, so the word “broccoli” was created as a way to get around televisions censors.

It should be noted that “Broccoli” became one of the first ever Cannabis spots to run on New York/New Jersey cable during prime time in the New York Metro Market on stations such as MSNBC, CNN, Fox News.

On the other side of the spectrum, The Partnership for a Drug-Free New Jersey won “Best of Public Relations” for its Knock Out Opioid Abuse Town Hall Series, a partnership between the organization and the Horizon Foundation.

Also taking home four 1st place awards, this is the 20th consecutive year that the Partnership has been honored by the New Jersey Advertising Club. According to Executive Director Angelo M. Valente, “We are pleased with the fact that our crucial message is getting out there. I think our winning is attributed to being current with both the message and how the message is being delivered.”

Rob Schnapp, New Jersey Advertising Club president, commented that the Jersey Awards program has been growing exponentially over the years and that this year’s competition had the most entries – 550.