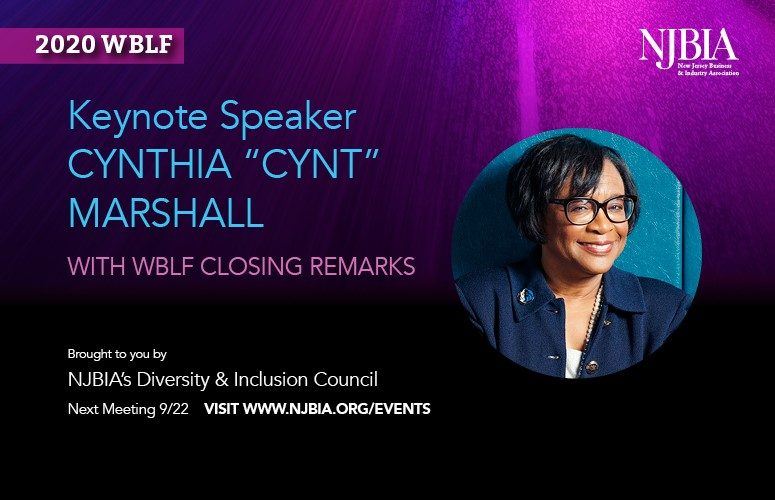 Tasked with sparking a culture transformation, Cynthia “Cynt” Marshall became CEO of the NBA’s Dallas Mavericks in 2018. During the closing keynote discussion at the New Jersey Business & Industry Association’s (NJBIA) 6th Annual Women Business Leaders Forum, Marshall, the first black, female CEO in the NBA, said her vision was for the Mavericks organization to become the global standard for inclusion and diversity. Since taking the helm, her values-based leadership style has brought transparency and trust, and has evolved what was once a corrosive company culture in a very short period of time.

While it is one thing to talk about diversity and inclusion, it’s another thing to actually take the necessary steps to take action. When Dallas Mavericks Owner Mark Cuban hired Marshall, she was tasked with driving systemic change within an organization that had been publicly documented as being marred with a history of sexism and racial discrimination.

“I laid out a vision that said we would set the global standard in the industry for diversity and inclusion,” Marshall said. “We also put our values in place: character, respect, authenticity, fairness, teamwork and safety.”

Marshall said that diversity can be described as a number, stating that, “People can see diversity. Conversely, inclusion is how do you make me feel? Do you teach me the rules? Do you teach me ‘dance moves’? Do I know what to do when I show up to that table? Is my voice heard?

“Diversity is being invited to the party. Inclusion is being asked to dance,” she said.

Marshall has made it a point to ensure that everyone’s voice matters within the Mavericks organization.

“A company does well by doing good,” she said. “We don’t just work here, we live here too. The things that are important to the community are important to us. We need to get to a point where we start to challenge each other on our beliefs and our biases and hold each other accountable for taking action.”

Know What is Important to You

During the fireside-chat-style discussion with NJBIA President and CEO Michele Siekerka, Marshall also touched on the importance of prioritizing, an attribute that is even more crucial in today’s pandemic-driven remote-work landscape.

She then recalled a story during her time as president at AT&T North Carolina, when she was called upon to meet with key policymakers in Washington, DC by the company’s DC branch. Unfortunately, the day that the policymakers could meet was during Marshall’s son’s first high school swim meet.

“I told them, ‘I can’t do it.’ It was his first swim meet at a new school in a new state. I had to be there, it was ‘crystal,’” Marshall said. “I flew back the next morning and ended up meeting with the same policymakers the next day. All of them appreciated the fact that I went back home for that swim meet, because I knew what was important. We have moments like that in our personal and professional lives where we have to decide on our priorities.”

Always Get Back Up

Marshall’s leadership style wasn’t formed overnight. She has had her share of hardships throughout her life, including growing up in housing projects in California, dealing with an abusive father, and losing her six-month-old daughter. She said that the adversity that she faced throughout her life has helped shape her into the successful leader, and person, that she is today.

“No matter what happens – things can be taken away from you, you can fall down – but the key is to get back up,” she said. “You’ve heard the saying that ‘tough times don’t last, tough people do.’ Well, sometimes tough times do last for a while. I call them seasons, and I try to learn from them.”