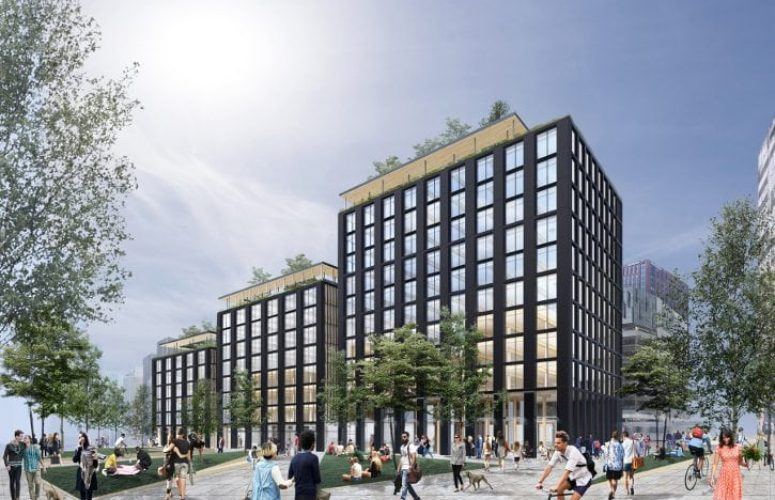 Riverfront Square will occupy the 11.8-acre site, which includes the former Newark Bears and Eagles Stadium and the site of the former Lincoln Motel. The ambitious mixed-use project, estimated at $1.7 billion, is expected to provide up to 2,000 residential units, large and small-scale retail, cultural and public open spaces, a hotel and parking spaces in the heart of Newark’s downtown, adjacent to the Broad Street Station.

“This project is exciting on so many levels,” Picco noted. “It will introduce the first, mass timber building built on the East Coast, so we truly are bringing a new concept to the market. Beyond its innovative nature, this skyscraper will set the stage for a transformative development that will change the very character of the Broad Street corridor. And the timing is right – the City of Newark has been enjoying a wave of development over the past five years with several new major projects completed. Newark is a hot spot with a bright future, as evidenced by the proposed Riverfront Square project and Amazon’s recent announcement listing Newark as one of its top 20 choices in the country for its 2nd HQ.”

Designed by Michael Green Architecture, the Class A building has been crafted to enhance environmental sustainability and tenant wellness. “People react differently to wood environments, including higher productivity and workplace satisfaction,” Picco said. “The entire master plan is pedestrian centric, with five acres of open space that will blend seamlessly into the wider neighborhood – which includes Washington, Military and Riverfront parks, along with cultural attractions like NJPAC and the Newark Museum, and retail and dining. Where much of Newark’s historical development has created insular environments, Riverfront Square is designed to invite the community in.” Phase I construction will also include 100,000 square feet of retail and a parking garage.

The leasing team expects Riverfront Square to draw interest from tenants currently based in New York City and the New Jersey suburbs alike. In addition to being 11 miles from Newark Liberty International Airport, which is undergoing a multi-billion dollar renovation of Terminal A, the site is just steps from NJ Transit’s Broad Street station and Newark Light Rail. “Here’s a place that is less than 20 minutes from New York Penn Station at a time when tenants seeking large blocks of space in new buildings are facing historically high rental rates in Manhattan and the outer boroughs,” Picco said. “Newark offers a convenient alternative with an urban vibe at a fraction of the cost. Under the Grow NJ program, tenants will be able to take advantage of net effective rents as low as $10 to $15 per square foot. The onsite live component at Riverfront Square is another bonus for employees as residential rents are less than half the cost of Manhattan.”

Newark’s current TAMI and financial services sector boom also heightens its appeal for tenants already located in New Jersey. “The entire New York/New Jersey region is seeing a resurgence in these industries, which in turn is bringing young professionals to the area,” Picco said. “Companies here are able to tap into the largest talent pool in the country, and those located in 24/7 urban environments have a real advantage when it comes to attracting and retaining top creative talent.”

The city’s growing reputation as a magnet for TAMI and financial sector firms is not coincidence, according to Brady, a data center expert. “Newark is one of the most connected cities in our region with the major East Coast Telco Hotel at 165 Halsey Street,” he said. “This is further evident by the abundance of cable, Telco networks, AWS Cloud Direct Connect and subsea cable connections to Ireland and Denmark, which can avoid going through Manhattan. Newark also houses a massive dark fiber infrastructure that positions it to offer one of America’s most powerful and inclusive networks. This is a huge advantage for technology-heavy space users.” In fact, the city has taken advantage of the fiber network running under its streets, offering 1 gig (1,000 megabits per second) and 10 gig (10,000 megabits per second) speed for commercial and public spaces, and eventually in homes via its Newark Fiber program. Launched in 2015, Firebolt Wi-Fi is the fastest, largest, free outdoor public Wi-Fi network in the country.

“2 Gateway, Newark’s largest office property under the long-time ownership of C&K Properties – a Lotus Equity Group affiliate – was the first to leverage Newark Fiber for its tenants,” Brady said. “The property also was the first in New Jersey to be Wired Certified Platinum by WiredScore, recognizing the highest level of internet connectivity and technology infrastructure. Now, Lotus Equity Group has designed Riverfront Square to achieve that same distinction.”

Interest and activity at Riverfront Square is very strong, and we are confident the first building will start in the near future.