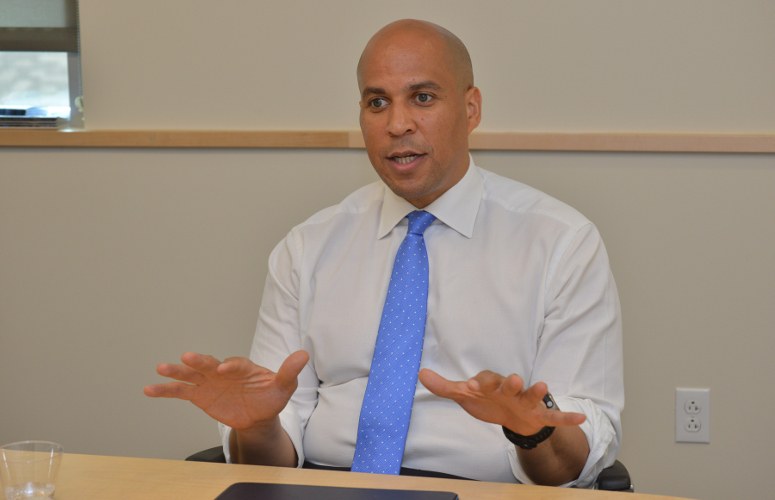 Sen. Cory Booker’s home state job rating has taken a hit since he launched his campaign for president, but remains in net positive territory. Still, most of his fellow New Jersey Democrats prefer one of the other leading candidates for their party’s nomination, according to the Monmouth University Poll.  More New Jerseyans think he would make a better running mate than top of the ticket candidate. The poll also finds that half the public says Booker bears at least some responsibility for the current water crisis in Newark.

The poll also finds that about half of New Jersey residents say Booker has either a great deal (28%) or some (23%) responsibility for the drinking water problem in Newark – the city he led as mayor until 2013.  Just 1-in-5 say he has only a little (10%) or no (10%) responsibility for this. The remainder have no opinion (8%) or are unaware (21%) of recent news reports of high lead levels in the city’s water system.  These results are fairly consistent across all partisan groups.

“Running for president can stretch the patience of home state constituents, and we are seeing some signs of that with Cory Booker. Still, he is managing to hold on to a net positive rating despite his national campaign as well as recent news that brought potentially negative attention to his time as mayor,” said Patrick Murray, director of the independent Monmouth University Polling Institute.

In a presidential preference test among Garden State Democratic voters and independents who lean toward the Democratic Party, Booker (9%) trails former Vice President Joe Biden (26%), Massachusetts Sen. Elizabeth Warren (20%), and Vermont Sen. Bernie Sanders (18%).  California Sen. Kamala Harris (6%) and South Bend, Indiana Mayor Pete Buttigieg (6%) are the only other candidates in a field of 19 who garner more than 2% support.

“The field will certainly be much smaller by the time New Jersey’s presidential primary rolls around. Booker’s home state standing could change dramatically if he can score an upset win in one of the February contests. But as it stands right now, Jersey Democrats are gravitating toward the three candidates who currently dominate the national spotlight,” said Murray.

Despite Booker’s lower standing in the presidential preference poll, he earns personal ratings on par with the other top contenders. Among New Jersey Democrats and Democratic leaners, Booker has a 60% favorable to 24% unfavorable rating, which is similar to Biden (64% to 23%), Sanders (63% to 25%), and Warren (59% to 17%).  Booker has better ratings than either Harris (43% to 22%) or Buttigieg (40% to 13%), although both those candidates are not as well known to New Jersey Democrats.

Reviews are more positive when his constituents picture Booker in the vice presidential slot.  Just under half (48%) say Booker would make a good running mate compared to 39% who say he would not, with another 13% offering no opinion. More than 3-in-4 Democrats (78%) say Booker is solid vice presidential material, compared with 39% of independents and 17% of Republicans who say the same.

Opposition has softened on Booker being on the national ticket in 2020 and simultaneously running for reelection to his U.S. Senate seat.  Nearly half the public (49%) says he should only run for president or vice president, which is down from 66% who said he should only pursue national office seven months ago. On the other hand, 29% say Booker should run for both senate and national office (as allowed by state law), which is up slightly from 21% in February. Another 22% have no opinion on what Booker should do in this situation, which is up from 13%.  It should be noted that the February question only asked about the possibility of Booker running for president, while the current poll question included president or vice president as the national office option.  Opposition to Booker being on the 2020 ballot for two different offices has dropped among all partisan groups since February.

The Monmouth University Poll was conducted by telephone from September 12 to 16, 2019 with 713 New Jersey adults, which has a +/- 3.7 percentage point sampling margin of error.  Some results in this release are based on 325 registered voters who identify as Democrats or lean toward the Democratic Party and have a margin of error of +/- 5.4 percentage points.  The poll was conducted by the Monmouth University Polling Institute in West Long Branch.