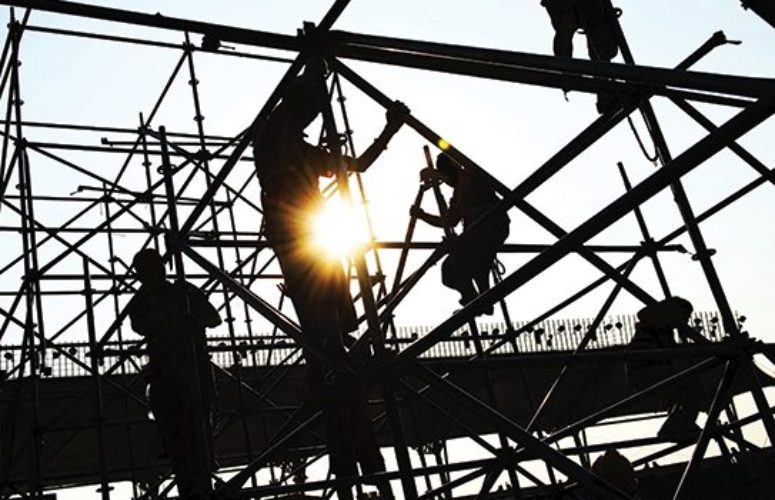 Construction Progressing Toward Fall Milestones at Prism’s ON3

The transformation of Prism Capital Partners’ ON3 campus in Nutley and Clifton picked up speed this summer, with several key projects hitting the mid-way point or nearing completion. The tangible progress at the 116-acre redevelopment will be followed this fall by multiple key milestones, including the first corporate occupant and the opening of ON3’s first structured parking.

Prism’s renovation of ON3’s 100 Metro Boulevard – the future home of Ralph Lauren Corporation’s New Jersey hub – is in its final stages. A complete lobby redesign featuring 30-foot ceilings and a new entryway highlights the improvements at the seven-story building. Outside, Prism has created a courtyard with communal areas for social and business gatherings. Further, the construction of a 2,500-space parking garage to serve both 100 Metro Blvd. and the adjacent, 15-story 200 Metro Blvd. will be finished in time for the iconic American fashion brand’s anticipated October move-in.

At the landmark 200 Metro Boulevard tower, Prism is in the midst of removing the original east-facing marble façade and replacing it with a new curtain-wall glass exterior. This will match the northern and southern facades, and create enhanced views of the Manhattan skyline. Other renovation work is readying the building for its future tenant(s). “Ultimately, 100 and 200 Metro Boulevard are key components of the next-generation, mixed-use complex we envision at ON3,” said Prism’s Edwin Cohen, principal partner. “The work being completed at both buildings, and the introduction of the first structure parking in the campus’ history reflect the major steps forward we are taking.”

ON3’s strategic location – just nine miles from Manhattan – has provided Prism with an opportunity to create a property that speaks to the changing demands of New Jersey communities, residents and businesses. The mixed-use complex will integrate office and R&D facilities, recreational, hospitality and wellness options, among others, and is positioned to set a benchmark in Walking Urbanism.

To that end, Prism is in high gear toward completing the ON3 campus infrastructure as development continues. Prism added and rebranded streets on the east portion of the campus, installed new sewer and storm water systems, and orchestrated electrical grid enhancements. On the west side, Prism has incorporated a robust roadway network – allocating and integrating development sites, and enabling the campus to be easily and fully traversed.

This work coincides with Quest Diagnostics’ development of a 250,000-square-foot, state-of-the-art diagnostic testing facility at ON3. Steel is up and exterior walls are under construction at that owner-occupied project, which broke ground in March. Additionally, Prism is finalizing plans for a proposed, four-story, 164,000-square-foot speculative laboratory building at ON3 – which would be New Jersey’s first spec lab in recent history. “The expansion of R&D facilities at ON3 signals the region’s continuing rebirth of life sciences and biotech on a site that was once home to healthcare pioneer Hoffmann-La Roche,” Cohen said.

Since Prism’s 2016 acquisition of the ON3 site, sustained activity has been rebuilding the tenant population. ON3 already has attracted a blue-chip list of life sciences and educational tenants. The property also houses Modern Meadow, Hackensack Meridian School of Medicine at Seton Hall University, Hackensack Meridian’s NIH-designated Clinical Research Center, The Hackensack Meridian Health Center for Discovery and Innovation, and Seton Hall University’s Graduate College of Nursing and School of Health and Medical Sciences. Prism expects that corporate tenants and users will employ more than 5,500 people at ON3 by 2021, while the ongoing redevelopment is creating hundreds of construction jobs.

Throughout the entire ON3 redevelopment process, municipal involvement has been critical in the process. “We place the highest value on input from municipal officials in Nutley and Clifton, and the ongoing transformation of ON3 is a reflection of those strong public-private partnerships,” said Cohen.