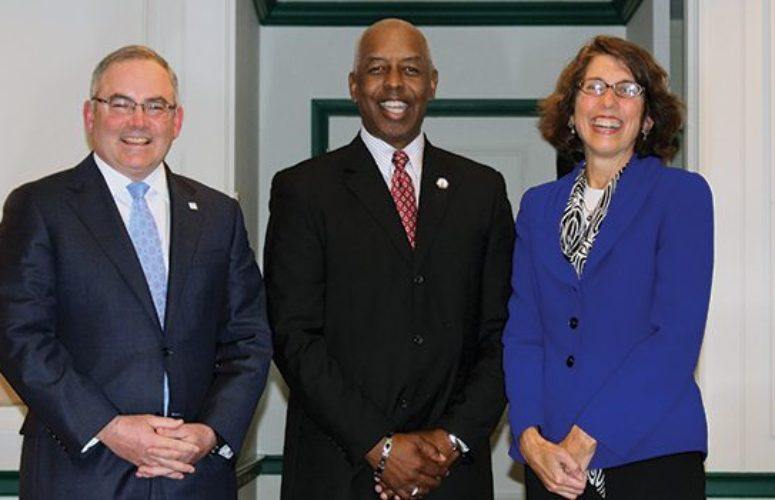 Collaborating for a Greater Trenton

Nonprofit organization’s mission is to revitalize the state capital’s downtown and more.

There are many urban redevelopment success stories regarding New Jersey’s major cities, and in one breath, these names always come up: Jersey City, Newark, Camden and New Brunswick.  For the most part, the City of Trenton – the state’s capital – is left out of the conversation. An independent non-profit 501(c)(3) organization is destined to change that.

Greater Trenton, a newly formed partnership between private industry, higher education, community groups and the administration of Trenton Mayor Eric Jackson, is promoting economic development and revitalization projects. The organization is not just about bringing jobs to Trenton, but creating an atmosphere where people will want to live, work and play.

According to Caren Franzini, co-chair of Greater Trenton and former head of the New Jersey Economic Development Authority (EDA), “Cities have limited resources, so Greater Trenton will provide private resources to help Mayor Jackson implement a vision for the downtown.”  She adds that major cities across the country – and in New Jersey – have been entering into such partnerships for decades with successful outcomes.

Explaining the financial commitment Greater Trenton members are making is Bernie Flynn, president and CEO of NJM Insurance Group and Franzini’s co-chair counterpart. “When Greater Trenton was officially announced, we had seven contributing organizations on board, and several more are now deciding to join. These members are each committing $50,000 over the next five years,” he says. This money is in addition to a $250,000 start-up challenge grant made by NJM Insurance.

“This money will give us the foundation to form the roots of the organization,” Flynn says.

At press time, Greater Trenton is looking for an executive director who will assemble a staff. Once in place, this team will begin to carry out key objectives, which include: coordinating downtown economic development projects; providing one-stop support and information for investors interested in taking on new projects; reaching out to potential residential, commercial and/or retail investors and tenants; supporting and promoting existing clean-and-safe efforts; engaging downtown stakeholders in a strategic economic development plan; and developing marketing strategies.

“We want the best person to head the organization. We anticipate that we will have an executive director by the first quarter of this year,” Franzini says. “Of course, the Greater Trenton office will be in the middle of the city’s downtown so that staff can work collaboratively with all of the committed entities.”

The organization traces its roots back some three years when a group of concerned residents in Trenton and greater Mercer County met to discuss the needs of the city, especially its downtown. This group included Franzini and evolved to encompass: Skip Cimino, former president and CEO of Robert Wood Johnson University Hospital at Hamilton; Barbara Moran, former executive director of the New Jersey State Council on the Arts; John McGoldrick, former chairman of Zimmer, Inc. and former executive vice president and general counsel at Bristol-Myers Squibb; Albert Stark, senior shareholder at the law firm of Stark & Stark; Peter Kasabach, executive director of New Jersey Future; and Monique King-Viehland, director, Trenton Department of Housing and Economic Development, to name a few.

When asked about Trenton’s assets, Mayor Jackson responds, “The city’s competitive advantages include its geographic  location (slightly over an hour’s drive to New York City and 30 minutes to Philadelphia), its Northeast Corridor rail stop, major highway access, diverse housing stock, population diversity, an urban environment that supports a thriving arts scene and the fact that it is the seat of state and county government.”

Flynn says that economic development cannot happen unless security is prevalent, and the Jackson Administration has been making strides in this area. According to the mayor, “We are trending in the right direction regarding things that matter to private investors. The overall crime rate is down 21 percent since I took office more than a year ago.  Our community policing initiatives are beginning to work and people feel safer.

“Additionally, we are moving in the right direction in terms of education. Our high school graduation rate had been hovering around 50 percent. This year, we are going to be at around 73 percent,” he says.

The city also has available land for businesses to construct new facilities or refurbish older ones. Some of the current projects include the New Jersey Association of Realtors’ new 20,000-square-foot headquarters at 10 Hamilton Avenue. This $9-million project will bring 80 jobs to the city. Ajax Management is turning the former Bell Telephone building at 26 East State Street, which had been vacant for more than 30 years, into a mixed-use building with retail on the first floor and residential lofts on the upper six floors. HHG Development Associates, which specializes in luxury lofts, homes and mixed-use projects to restore the city’s historic fabric, is also busy with projects in the south end of Trenton, Mayor Jackson reports.

Not at liberty to reveal the details, the mayor says a developer has expressed an interest to develop a nine-acre site that could lead to the creation of up to 300 jobs. “So, we have available parcels of land that are primed for development and redevelopment,” he says. “However, the impetus for a sustainable future will start in our downtown and then grow outwards.”

Both Flynn and Franzini credit Mayor Jackson for instilling a feeling of hope back into the city. “I was on the Greater Trenton formation committee and we actually said that if someone is elected to run the city that we don’t have confidence in, we will all go back to what we were doing. When Mayor Jackson was elected, we had the confidence that this can all work,” Franzini recalls.

“Leadership matters,” Flynn adds. “Part of the pitch to me concerning Greater Trenton from Caren and Skip Cimino was that we had a new leader in city hall who could be our partner … who is willing to embrace the concept of collaboration.”

Asked to forecast what Trenton will be like five years from now, Jackson responds, “I see a transformed downtown. I see a city that has bought into the concept of Greater Trenton. I want to be around for a long time, but this initiative is beyond Mayor Eric Jackson. This is about building a sustainable future for our city.”