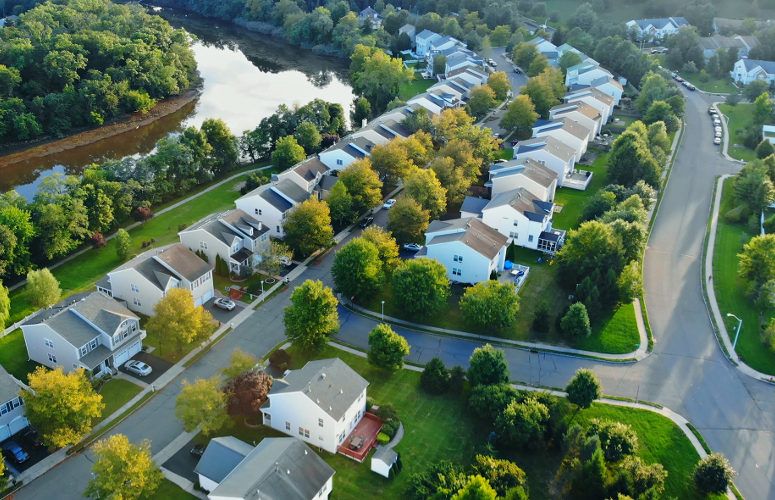 The New Jersey suburbs have seldom been more popular, with a surge of New York City buyers seeking larger homes and more space of their own. Coldwell Banker Realty polled its local real estate experts for insight into the hottest towns in the current real estate market, and now presents the “Top 10 Best Places to Live in New Jersey.”

“The challenges of 2020 certainly changed the mindset of city dwellers who might have been content to remain there but are now seeing the benefits of more space, a yard, a swimming pool, a home office, and more home and property for their dollar. For some buyers, recent events just pushed ahead their existing plans,” said Rob Norman, president of Coldwell Banker Realty in New Jersey and Rockland County, New York. “With distance no longer being an issue for many workers who are telecommuting, they have been able to expand their home search further afield.”

The Top 10 Best Places to Live in New Jersey*

10. Princeton: “Princeton is a diverse community largely influenced by education and culture. It is a go-to destination for people that want to replicate city life in a suburban setting,” said agent Heidi A. Hartmann. Princeton’s current influx of buyers are generally from Manhattan, Brooklyn and Jersey City, said Hartmann; high on their wish lists are updated or new homes. Pending sales in July and August were more than 30% over the previous year.

9. Bridgewater: This suburban hub in Somerset County is bustling; local real estate experts witness many homes enter the market and sell immediately. In August, there was a 40% increase in under-contract homes compared to the previous year. Agent Kevin Yento said a lot of buyers are moving from New York as well as northern New Jersey counties such as Bergen and Union. “People want to be away from New York, yet still be close to New York in the future,” said Yento. Bridgewater draws in home buyers due to its central location among several major highways, trains and an abundance of retail and dining establishments.

8. Sparta: Real estate agent Denny Kevil, a Sparta native, has spotted an increase in New York City buyers hoping to relocate to this township in rural Sussex County. Offering 11 private lake communities and the historic Lake Mohawk boardwalk and plaza, Sparta provides the charm of resort living just 45 miles from Manhattan. “What we’re selling here in Sparta and Lake Mohawk is a lifestyle,” said Kevil. “It’s like Brigadoon.” The average list price for a home in Sparta jumped from $464,809 to $529,695 between August 2019 and August 2020.

7. Madison: West of Manhattan in suburban Morris County, local real estate agents are reporting a surge of buyers from New York City, although local buyers are also helping to drive the market. Multiple offers are common, as well as cash deals. “We’re seeing this robust activity at all different price points, from inexpensive condos up to multi-million-dollar homes,” said Madison agent Scott Spelker, who is also the borough’s historian. He pinpoints Madison’s sense of community, its attractive downtown, train access and proximity to highways among the town’s many amenities. New listings in Madison increased by 53.8% in August year-over-year.

6. Clinton (Town and Township): With close proximity to the office becoming less critical for many workers, rural Hunterdon County—more than 50 miles west of New York City—has become a popular destination for home buyers. Clinton, home to the photo-friendly Red Mill, gateway to the Hunterdon countryside, and located just off three major highways with outdoor recreation and a quaint downtown, is a prime example. “Once lockdown restrictions lifted a bit, buyers started coming out in droves to view homes for sale, all while everyone used proper safety measures,” said agent Craig Ort. Then the market exploded. “Homes are selling faster than they can come on the market with, in many instances, multiple offers and for over asking price,” said Ort. Homes in the Clintons spent an average 54 days on the market in August compared to 76 a year prior.

5. Closter: The relocation of New Yorkers to suburban Bergen County continues to gain strength. “I am witnessing both increased sales prices and volume month-over-month,” said agent Josh Baris. Housing inventory was down nearly 40% in Bergen County in August compared to the previous year, per New Jersey Realtors; Closter itself experienced a 185.7% increase in closed sales. “Towns like Closter have proven to be desirable due to their location and easy commute to Manhattan. Closter recently expanded its downtown area and shopping district, and has everything a New Yorker desires,” said Baris.

4. Manalapan: With commuting becoming less of a concern, even the Jersey shore area is seeing an inflow of New York City buyers. Between August 2019 and August 2020, the average sales price jumped from $425,000 to $525,000 in Manalapan, a coveted suburban town about 15 miles from New Jersey beaches and 45 miles from New York City. “I believe there are multiple factors that created the perfect storm for the real estate market in Manalapan to explode,” said agent Alan Kurlander. “People are leaving New York City, Staten Island and Brooklyn. Workplaces in Manhattan are now allowing employees to work from home three to four days a week. Buyers are wanting to be in less crowded areas. There are low interest rates on home mortgages, and taxes here remain significantly lower than in north Jersey.”

3. Wyckoff: “I am definitely seeing more New York buyers now than I have ever seen,” said Wyckoff agent Lynn Brescia. In August, pending deals were up an astounding 222% over the previous year. There was a 100% increase in closed sales over the previous year in September, with under contract properties pushing that momentum into the fall, said Brescia. Fellow agent Will Alfaro added, “Wyckoff is a peaceful suburb with a top-notch school district and a vivacious community. With mortgage rates at historic lows, young families have been pouring into the town, enthralled by its charming downtown areas, convenient transit to New York, abundant recreational activities, and harmonious atmosphere.”

2. Montclair: “I’ve never seen it like this before, ever. They’re coming in droves. There are lines at open houses and almost every car on the street has a New York license plate,” said Montclair agent Jocelyn Russo. Being a train town close to Manhattan, Montclair has always been in high demand. Fewer commutes haven’t diminished its appeal. With a beautiful selection of homes and superb downtown walkability, Montclair is a top destination for city buyers. New listings on the market increased 280% in August over the previous year (partially due to a late spring market), while homes sold 44.4% faster at 20 days and achieved a median sale price of $975,000, a 29.5% increase over 2019.

1. Westfield: “It’s no surprise we are having an influx of buyers coming from urban areas. I moved to Westfield from Brooklyn 25 years ago because Westfield was the perfect combination of urban living with a small-town vibe. We have an amazing downtown, gorgeous homes on tree-lined streets, great schools and a strong sense of community where neighbors know your name,” said Westfield agent Jean Marie Morgan. Union County in particular experienced a large migration from New York City, starting in the spring with many renters who could relocate more nimbly. By early June, city homeowners were listing their properties and seeking out houses further west. Westfield saw a 97.1% increase in new listings in August 2020 over 2019, and a 58.3% increase in closed sales. The inventory of available homes was down 48.9%.

“Because of uncertainty and limitations earlier in the year, we experienced a delayed spring market,” said Norman. “We went into a standstill in March, but as time went on, we all adapted to safety protocols and virtual showings. Motivated buyers arrived in full force, and late summer was comparable to the excitement and high level of activity we typically see in the spring. This applies to almost all suburban areas and price points in New Jersey.”

Main Street, the Heart of Hackensack’s Business District, is Now a Two-Way Road