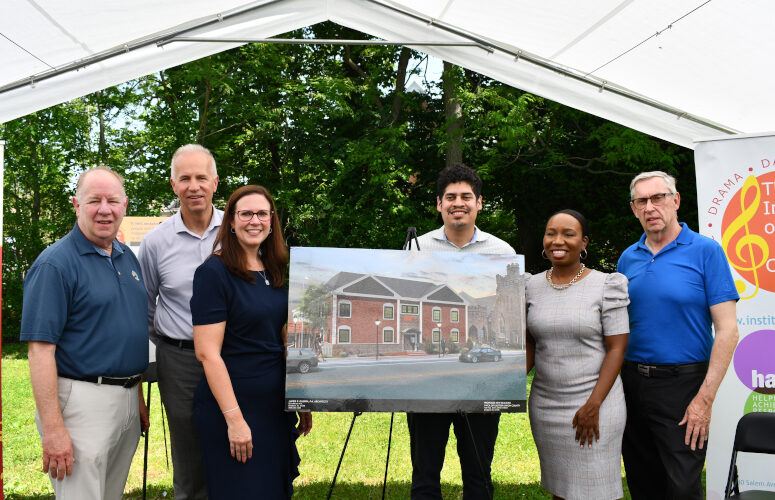 Elizabeth Development Company (EDC) and local officials recently celebrated a new $611,700 grant that will be used to revitalize Elizabeth’s Historic Midtown neighborhood, a transit-oriented district that is currently undergoing a multi-million-dollar transformation. The celebration took place at the Institute of Music for Children on Saturday, May 21.

The new funding was made possible by Wells Fargo and Valley National Bank through the New Jersey Neighborhood Revitalization Tax Credit (NRTC) program, which is overseen by the New Jersey Department of Community Affairs (DCA).

During the ceremony, officials highlighted how the investment will strengthen quality of life for residents, businesses, and visitors in the downtown area, as well as spur economic development activity around the Elizabeth train station. The NRTC grant will fund the construction of the new headquarters for the YWCA of Eastern Union County, provide Midtown small businesses with access to capital in the form of loans and grants, and continue support for Midtown youth to attend the Institute of Music for Children, as well as increase beautification and green projects in partnership with Groundwork Elizabeth.

In addition, Wells Fargo is partnering with the Institute of Music for Children to beautify the area around the school during a volunteer day on Saturday, June 18th.

“The NRTC program is an integral component of rebuilding our neighborhoods,” said Elizabeth Development Company (EDC) Executive Director William O’Dea. “The continued investments made by Wells Fargo have been vital to projects investing in our youth and the women served by the YWCA. They are a great partner.”

“I’m thrilled that Elizabeth’s Midtown is on the receiving end of this substantial NRTC Program investment and that they are using the funds to strengthen small businesses and support youth and the arts in their community,” said Lt. Governor Sheila Oliver, who serves as DCA Commissioner. “The NRTC Program has a proven record of delivering results that spur economic development and improve neighborhoods and I look forward to seeing all the good that comes from their revitalization efforts.”

“This year, we announced the largest amount of funding the NRTC Program has ever awarded statewide to help propel revitalization plans forward. Our team at DCA is excited to work with the City of Elizabeth and EDC to help them carry out their community-driven neighborhood revitalization plans,” said Bradley Harrington, neighborhood programs administrator for DCA.

“Investing within our municipality creates new jobs, improves access to resources and enables the continued growth of our local economy. The city of Elizabeth is grateful for this opportunity as well as the support and efforts, of our community and state partners,” said Mayor J. Christian Bollwage. “The revitalization occurring within our Historic Midtown is transforming our municipal landscape and this grant will enable quality of life services to be enhanced and continued vital assistance to be provided to our small businesses and local organizations. Through initiatives, which encourage innovative projects, transportation enhancements and community support services, we continue to elevate our Transit Village and solidify our Midtown neighborhood as a destination.”

“Small business growth is critical to the fabric of our communities,” said Paralee Knight, vice president of community relations at Wells Fargo. “As a company with longstanding roots in Union County and throughout New Jersey, we always want to be about helping the neighborhoods we serve to create a vigorous, growing local economy. By helping underserved communities like Elizabeth, we are also helping to build a better more sustainable city.”

The new grant also closely coincides with the city’s ongoing, second NRTC Midtown neighborhood 10-year plan, which was originally approved by the DCA in 2009. Major achievements from the plan include the creation of the Trinitas Center of Regional Center of Education, a state-of-the-art, 1,470 square-foot academic training center; the addition of a new 144,000 square-foot academic building at Union County College; and the redevelopment of a 60 unit affordable apartment complex.

Today, several hundred units of housing have been completed or are under construction in the Midtown neighborhood. In addition, New Jersey Transit is currently undertaking a $71 million redevelopment to completely modernize the city’s train station. When completed in 2023, it will feature new inbound and outbound station buildings, longer platforms to increase boarding capacity and improvements to access, systems and more.