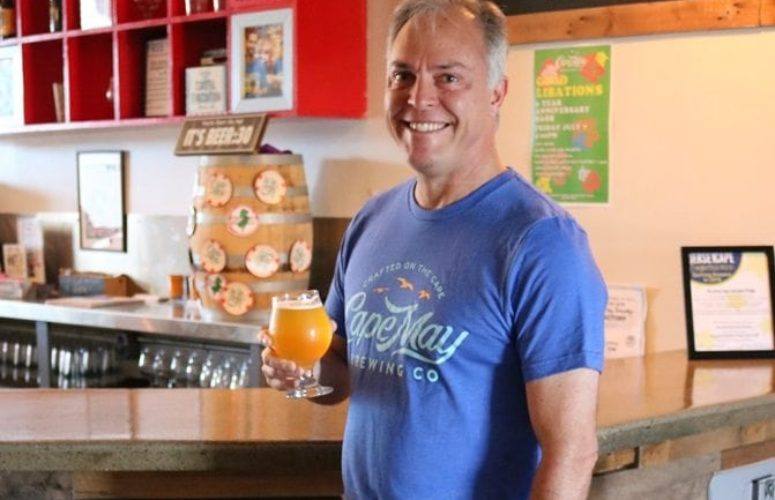 Cape May Brewing Company announces that John Appel, a fifteen-year food and beverage industry veteran has signed on as the company’s new COO.

“John is a seasoned professional who fits in well with our entrepreneurial culture,” says CMBC president and co-founder, Ryan Krill. “His wealth of experience and proven track record will serve invaluable in leading our strategic growth and managing our 56 team members, bringing a great deal of knowledge and perspective to the table.”

A California native, Appel graduated with a BS in Business Administration from the University of California at Berkeley and an MBA from The Wharton School at the University of Pennsylvania. His career in roles ranging from CFO to interim CEO claims a series of accomplishments in enhancing company performance through assisting their founders in creating scalable processes and building teams, ultimately increasing sales and production.

After a career on Wall Street as a Financial Analyst with Merrill Lynch and directing mergers and acquisitions and leveraged buyouts with Dillon, Read & Co., Appel joined the largest privately-owned bank in the country, Emigrant Savings Bank, starting their food and beverage investing group.

In 2012, John created Global Restaurant Group with a business partner, developing and operating KFC restaurants in Kyiv. After the unrest in Ukraine and Crimea, Appel returned stateside to join Magnolia Brewing Company in the Haight-Ashbury district of San Francisco.

Fresh off a $7M expansion from their original pub and 7-barrel brewhouse to a 30-barrel brewhouse production brewery and adjacent BBQ restaurant, Magnolia hired Appel after the expansion to help them manage their finances, develop their operations, and enhance their growth. Under his leadership they grew distribution into Portland and Los Angeles, and launched their first packaged beer with 6-pack cans, which grew Magnolia’s output by nearly 50 percent between 2016 and 2017.

Appel sees a lot of opportunity in the craft beer industry in South Jersey. Coming from an area as saturated as San Francisco, he sees some commonalities and some stark differences.

Appel believes that being associated with Cape May is an extraordinarily positive aspect of CMBC’s positioning within the market — Cape May evokes so many great things to a great number of people.

“For anyone who has vacationed in Cape May before, just the mention of Cape May brings back great memories,” he says. “To be tied to the good feelings associated with Cape May and have that as part of our identity is a great advantage.”

Appel and his wife Sangeeta are among the people who’d vacationed in Cape May in the past and created great memories.

“We loved the old Victorian homes, the boardwalk, just the general vibe and feel of Cape May,” he says.

Being a California native and having spent much of his life on the West Coast, John loves being in a beach community with Cape May’s singular combination of nostalgia in a relaxed atmosphere.

“On the West Coast, you either have nostalgic or laid back; you don’t have a lot of both,” Appel says, laughing. “You can go to San Francisco and see a lot of Victorian architecture, but it’s not a beach vibe. Or you can go to the beach, but at most places it’s either upscale, luxury homes or small, old beach bungalows. But to take a charming, Victorian town and plop it on a beach that’s as beautiful as any beach anywhere, that’s pretty unique.”

“I feel right at home here,” Appel says. “When I look at the scope of things that I’ll be doing over the next year and beyond, it’s all things that are right in my wheelhouse.”

Cape May Brewing Company Continues Expansion Outside of NJ