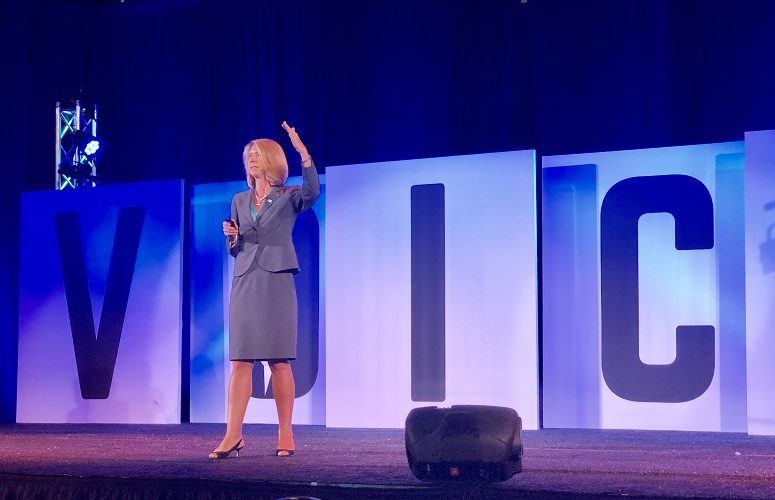 New Jersey has the assets to compete globally in the innovation arena, it just needs to leverage them, New Jersey Business & Industry Association (NJBIA’s) President and CEO Michele Siekerka today told the audience at VOICE Summit 2019, a voice-tech conference held this week at the New Jersey Institute of Technology (NJIT), Newark.

The venue was perfect to advance NJBIA’s vision “to see New Jersey reclaim its stature as the innovation state” – a theme spelled out in one of her first slides shown at the conference for cutting-edge technology.

With more than 5,000 people from around the world in attendance at the conference, Siekerka noted that New Jersey had a decades’ long history of being the key “innovative state,” but now increasingly faces competition from such locales as New York and Massachusetts.

But it’s not without its core positive assets. The Garden State possesses a great central location between Boston and Washington, D.C., superb ports/infrastructure, as well as a high density population of residents who possess Ph.D.s.  Moreover, Newark and Camden are especially innovation-friendly with innovative companies and other assets, and the state’s six research universities – Rutgers University, Princeton University, Rowan University, Montclair State University,  Stevens Institute of Technology, and NJIT – are, in effect, a boon to the state’s vast array of technology and life sciences endeavors.

New Jersey should also increase its R&D investments (New York, for example, has vastly outpaced other states in the region with its investments), she said.

Additionally, Siekerka said residents aged 18-34 are leaving the state at an alarming rate, jeopardizing the state’s future workforce talent pool – and New Jersey should work to retain and attract them.  And while New Jersey’s aforementioned higher education institutions are excellent, Boston, in comparison, has seven colleges/universities directly in and around that city, creating a massive innovation node.

Siekerka struck a positive note, stating that the state has an amazing entrepreneurial spirit and great entrepreneurs.

All this is against the backdrop of the state’s most crucial challenges, including its worst-in-the-country business climate and high taxes.

How might all of the above be improved upon?

She spoke specifically about the importance of ResearchwithNJ.com, for example, the Garden State’s first research asset datatbase, which – according to its website – “helps businesses and entrepreneurs identify and collaborate with our top universities and experts.”

Additionally, Siekerka argued for reactivating the Red Tape Review Commission formed under the Gov. Christie administration, which strove to eliminate unnecessary rules and regulations for businesses.