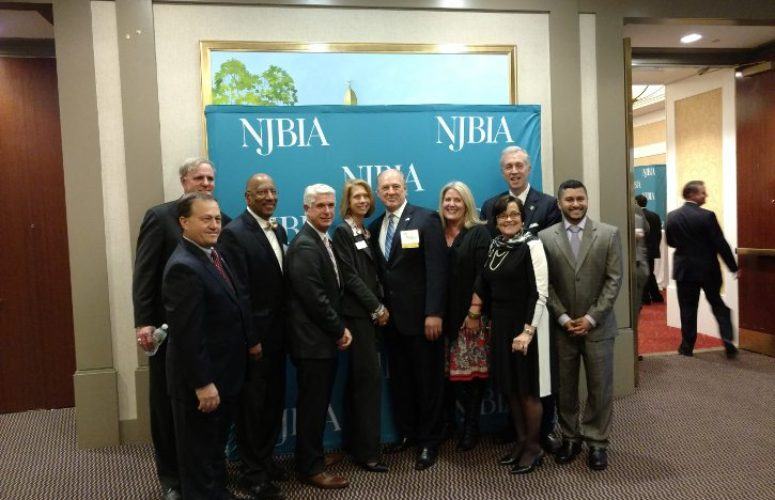 The New Jersey Business & Industry Association hosted state business executives, academic leaders, and legislators at a budget reception yesterday after Governor Chris Christie’s final budget address. Held at the Wyndham Garden Trenton, a crowd of 177 attended the event, including 80 people who crossed the street from NJBIA headquarters, where they had watched the budget address from the association’s first floor Innovation Zone conference center.

While most of Gov. Christie’s speech covered the achievements his administration has made these past eight years, he also made the following budget proposals:

The following comments were made by those attending yesterday’s budget reception.

Michele Siekerka, NJBIA President and CEO: The Governor presented a very responsible budget, one that is looking at the priorities of the state and making sure we fund them in a fiscally responsible manner. [The budget] meets our obligations to schools and to property taxpayers with $13.8 billion in education aid, and maintains state aid to municipalities, even as it holds the line on spending overall.

The Governor is looking for unique ways to address some of the challenges in the state. … I think everyone in the audience was thrilled at the idea of getting school funding reform done.  Additionally, the Governor proposed an interesting idea to address the unfunded liability in the pension system by transferring the Lottery Enterprise to eligible pension plans. We look forward to learning more about this initiative.

Brian F. Neuwirth, president, UNEX Manufacturing, and NJBIA incoming chairman: I liked a lot of the things that the Governor said, including making the pension payment – working things out on the management side with the various unions to get more money in. I also applaud him for going after drug addiction. This was his last budget address and throughout [the Governor’s] administration, we felt that someone was looking after our interests. From the business side of the equation, we are going to miss him.

Dean Paranicas, president and CEO of the HealthCare Institute of New Jersey: The Governor laid out a plan to continue to grow the state’s economy. There are a lot of key provisions in there [the budget] to do that. That’s positive because we need to have the right kind of environment for more investment in the state … to grow our job and economic bases. This is all going to help us move forward.

Debbie Hart, president of BioNJ: (Via e-mail response) BioNJ was encouraged that Governor Christie’s 2018 budget address emphasized the importance of a healthier fiscal environment to attract private-sector job growth as well as investment in education, including graduate medical education and infrastructure investment.  BioNJ represents over 400 research-based life sciences companies whose mission is to ensure a robust life sciences ecosystem in New Jersey. We look forward to working with the Christie Administration, Members of Congress and our state elected leaders to ensure support of our industry and the advancement of medical innovation.

John Kennedy, president, New Jersey Manufacturing Extension Program: A lot of good things will come out of [the budget]. I would have liked to have heard more talk about the STEM, manufacturing and the life sciences industries. Manufacturing is a critical industry. Tourism is a $37.3-billion industry in New Jersey, but manufacturing is close to $50 billion. The concern for me, as a citizen, is how does the money really get spent, and is it effective? Can the all the parties actually work together?

Sivaraman Anbarasan, CEO/executive director of the New Jersey Community College Consortium for Workforce & Economic Development: The Governor is providing flat funding for the community college sector, which we are happy – but not thrilled about – because flat funding is not powering our normal course of business increases.  However, we understand the budget process and the monies available for funding. We like to think we are as important as the k-12 sector because k-12 gets unlimited funding from the state.

Michael McGuinness, CEO, National Association of Industrial and Office Properties (NAIOP), NJ chapter: I was pleasantly surprised by the amount of good news that the Governor was able to report, which made me feel better about the state. I have been seeing a lot of businesses locating here. I see good things happening, but it is up to the municipalities to do their share now. Overall, I was more proud to be a New Jerseyan.

Herbert Ames, president of the Capital Region Minority Chamber of Commerce: The Governor’s delivery of the budget address was very sincere and down to earth. It motivated me to participate and do something good for the state in my role. It makes me want to work with everybody again and I hope our Legislature will work together in this [his] last year. I hope everyone will get together, drill down on this and find some common ground.

Randy Burrows, director of business development, Wedgewood Pharmacy: I liked what the Governor said about funding for special needs children because I have a special needs child. Through some of the cuts he had early on in his administration, with the level of services actually being reduced for us, this is of big importance to me. He said there will be continued increased funding.

Bernie S. Vitti, executive director, business development and sales, Pharma-Care, Inc: I liked what the Governor proposed concerning Horizon BCBS. I like that he wants to work with [the healthcare insurer] to help reduce the cost of healthcare. The other thing I liked is that he sighted the many areas where his administration has saved money. This was his best presentation … his best overall in terms of budget control.