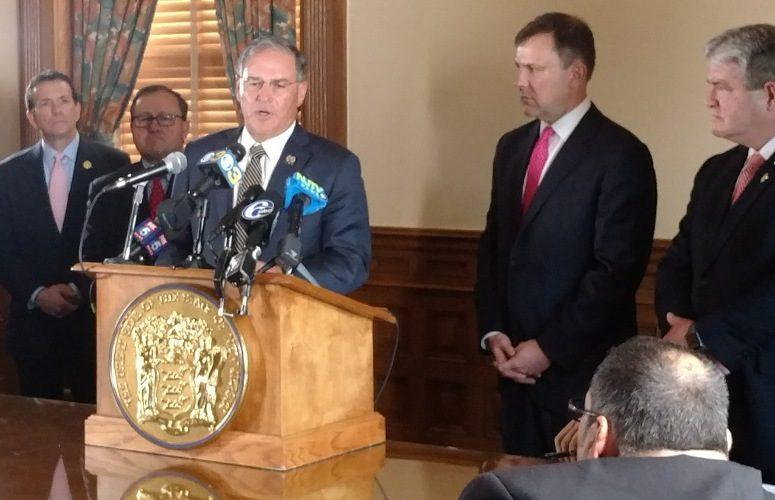 Via a zoom conference, Assembly Republican Leader Jon Bramnick today gave the Republican rebuttal to Gov. Phil Murphy's State of the State address. In the photo above, Bramnick is at the podium with other Republican leaders at a past rebuttal conference at the State House.
Government

Assembly Republican Leader Jon Bramnick used his rebuttal to the governor’s State of the State address today to condemn the riot at the US Capitol building last week.

“What we saw in Washington, D.C. was a disgrace to our country. It is important for us to be clear that the differences between my [Republican] Caucus and the Democratic Caucus [in New Jersey] and between myself and the governor are not personal, they are political,” Bramnick said. “I disagree to the governor’s approach in many areas, but … we are not enemies. Those who want to turn each other into enemies do a disservice to democracy.”

With that, Bramnick said that the overreach of Democrats in Trenton has caused New Jersey to be the No. 1 exit state and the most taxed state in our country.

“It is important to move away from raising taxes. The governor and his party have raised taxes 41 times, with the total amount of new taxes at $4.2 billion. He is the reason people are leaving our state,” Bramnick said.

With a Democratic president soon to be in the White House, Bramnick said the Democrats will not have the opportunity to point at President Trump for [their] failures (he also mentioned the name of former Governor Chris Christie). “They have to take on the responsibility of governing with no excuses. It is time to enact sane fiscal polices,” he said.

Bramnick also faulted the governor for executing executive orders without public input. “There have been no committee hearings and no opportunities for small businesses to be heard,” he commented. “The state is being run by executive orders.”

He added that the Republican philosophy in New Jersey is one that “focuses on lowering taxes, making the state more competitive, and making sure we help the most needy. We cannot over-govern and fix every single issue that exists in the state. Government’s duty is to make sure people are able to earn a living and enjoy living in this state.”

NJGOP Chairman Michael Lavery, in an issued statement, said the governor has “raised taxes instead of effectively delivering unemployment aid and repeatedly told people to leave New Jersey if they didn’t agree with him. Our state is taxing and spending more than ever, and Murphy’s massive debt scheme will leave our children footing the bill.”