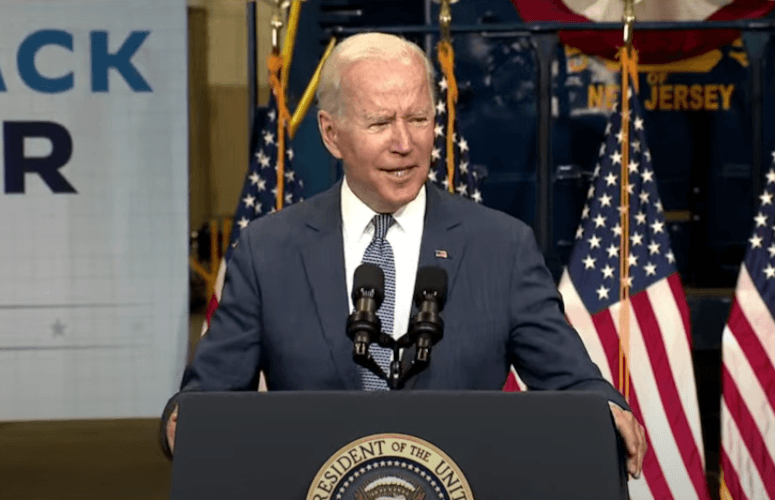 President Joe Biden visited New Jersey today to talk about the $1 trillion bipartisan infrastructure bill, in which the state is expected to receive some $12.3 billion. His trip coincided with kick off construction of the new Portal North Bridge over the Hackensack River in Kearny.

“We are here today to talk about what is important for New Jersey, the region and the country,” Biden said, adding that the infrastructure bill is about “rebuilding the arteries of America,” and that the portal bridge project is showing why infrastructure investments are so important.

“When the Portal Bridge was built, it was state of the art. That was 110 years ago. Today, it is called a choke point, a bottleneck, an Achilles heel in the Northeast Corridor,” Biden said.

“At peak use, 450 trains pass over the bridge every day, carrying 200,000 Amtrak and NJ TRANSIT passengers. However, ships and barges need to get under it and many can’t fit,” Biden said. “The bridge needs to swing open and close gain.  This process stops rail traffic and causes other problems. It opens more than 100 times a year and 15% of the time, something goes wrong. It was responsible for more than 2,000 hours of delays between 2014 and 2018.”

He said a new Portal Bridge will allow for increased speed, safety, efficiency and capacity. “It will make life lot better for New Jersey commuters and create nearly 8,000 union construction jobs in this area alone,” the president said.

He added that the infrastructure bill will renovate and rebuild the nation’s roads and bridges. “Across the country, 45,000 bridges are in disrepair – some dangerously so. Approximately 173,000 miles of roads are in poor condition. We are going to create them totally new. We are going to make the largest investment in public transportation in American history,” Biden said.

Murphy said there are few individuals who understand the importance of ensuring modern, safe, and reliable transportation infrastructure more than the president.

“I am so grateful for the support you and your team, and Transportation Secretary Pete Buttigieg and his team, have given to not just the Portal Bridge project, but the even bigger one waiting for us just up the tracks – the construction of a new rail tunnel under the Hudson,” Murphy said.

He also said the project will create good, union construction jobs that, in turn, will support even more jobs up and down the entirety of the Northeast Corridor. “We’ll also be showing the rest of the country just how vital it is that we have transportation infrastructure every bit as strong as our people and which can turn our greatest economic aspirations into reality,” Murphy said.

Earlier this month, Governor Murphy and NJ TRANSIT Board Members announced the approval of a $1,559,993,000 construction contract for the Portal North Bridge. The massive infrastructure investment represents the single largest construction award in NJ TRANSIT’s history.

The new bridge is a modern two-track, high-level, fixed-span bridge that will improve service and capacity along this section of the Northeast Corridor. The new bridge will rise 50-feet over the Hackensack River and will allow marine traffic to pass underneath without interrupting rail traffic.