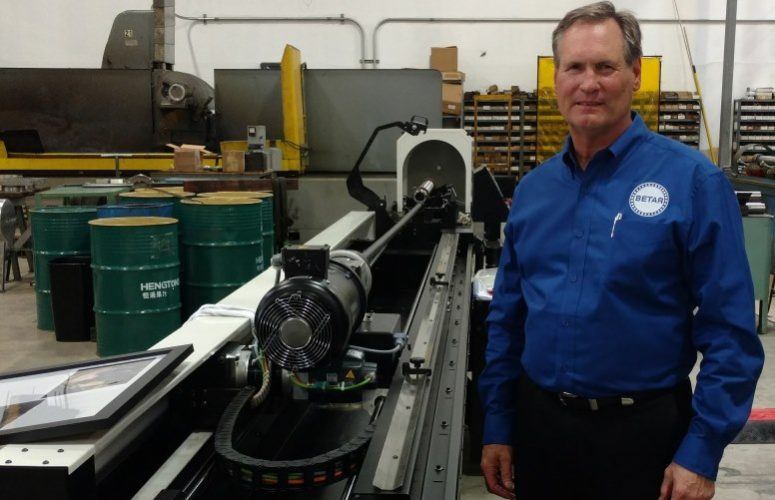 Commenting on the company’s success, President John Lohse said the firm has a “good niche business” and that “we have the best people we have ever had on staff.”

Betar currently employs 18 people, and Lohse needs to hire four more, but is having a hard time finding skilled employees; a common problem other manufacturing and industrial firms are facing across the state and nation.

“It’s impossible to find people, they are not out there,” Lohse explained. “I will take anyone with a desire to work and learn. We‘ll make something out of that person. … That is how desperate we are in this trade.”

Earlier in the day, between 75 and 80 students from Raritan Valley Community College and Middlesex County Vo-Tech visited the facility where deep drilling and honing machinery is on display. “It was amazing to see students’ eyes pop open,” Lohse said. “They learn [a few things] in school, but then they come to a place like this and see what it’s all about. This is reality.”

Betar serves the aerospace, agricultural, auto/truck/transportation, energy, machine tool, medical, military, nuclear and pharmaceutical industries with its products and services. Explaining what deep hole drilling is, Lohse explained: “You can normally buy a quarter inch drill bit that is probably three to four inches long at a hardware store. We can drill, for example, 100 inches at a quarter inch.”

Meanwhile, honing is an abrasive machining process that produces a particular finished surface on a metal. On display at Betar was a honing machine that was actually shaving or scraping the inside of a metal tube to achieve a specified opening. The entire honing mechanism was being cooled down by machine oil that was pouring through the metal tube like running water.

Betar was founded in 1968 by three founders who all worked at Egan Machinery in Somerville and saw a niche market in gun drilling. Lohse’s father eventually bought one of the founding partner’s shares. Through various retirements, Lohse’s father came to own the company. John joined his father at the age of 35 after spending time at Turner Construction. “I looked at the [company books], turned to my wife and said, ‘We can do this,’” Lohse said of his decision to join Betar.

Lohse has taken the company national and international, serving clients in Canada and Mexico. Though he doesn’t reveal company revenues, he did say, “They are not enough.”

He stressed again that he needs people who want to work … who could “hone” their skills at Betar.