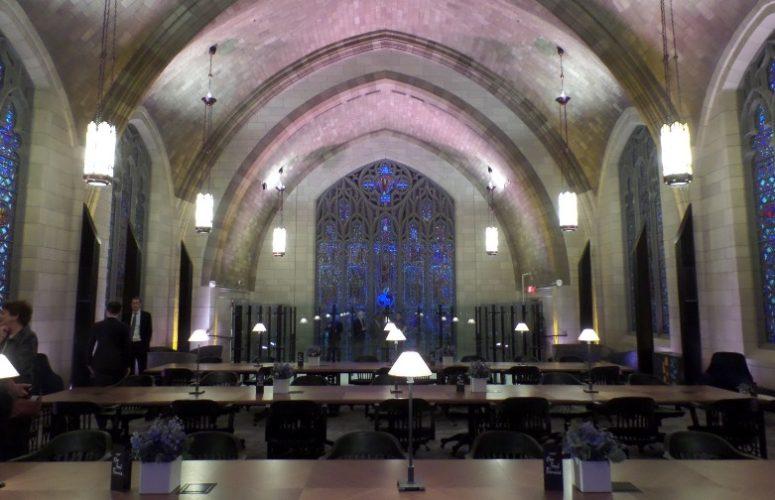 Audible today celebrated the opening of its Innovation Cathedral in Newark, where it will house 400 employees just a few short blocks away from its main headquarters at 1 Washington Park. Formerly home to the Second Presbyterian Church, which was founded in 1811 and would grow to a peak congregation of 10,000 in the 1950s, the structure lay dormant for 25 years.

The renovation was needed in an effort to house Audible’s expanding employee base. Don Katz, Audible founder and CEO, said the company is “growing like crazy.” In fact, Audible moved to Newark in 2007 with just 100 employees. Today it boasts 1,650 and is becoming the city’s fastest-growing private employer. He told New Jersey Business, “The cathedral will house 400 of the most advanced technologists in the world.” He also said that cathedral is a metaphor for how the “company rolls. We eschew arms-length philanthropy and pursue what a company can mean to society, including addressing issue of inequality. Doing the right thing is a responsibility all corporations must take seriously – and that companies anchored in cities like Newark have an obligation to lead.”

She also said the new location will help activate the Washington Park area at the northern end of Broad Street.

Audible, a subsidiary of Amazon, did not reveal how much money was spent in refurbishing the 80,000-square-foot structure, but from the looks of the renovations, the funds were well used. More than 100 artisans worked diligently to restore some of the church’s awe-inspiring features, such as its many stained glass windows, in which all panels were removed, cleaned and restored by Botti Studio of Architectural Arts, based in Illinois. If writer F. Scott Fitzgerald could call Princeton University “the loveliest riot of gothic architecture,” then this Newark church can be called “the loveliest riot of stained glass windows,” the largest of which is 31 feet high by 19 ½ feet wide.

Some 3,400 organ pipes (varying from 6 inches long to 16 feet long) were cleaned and restored by Lawrence Nevin, a former New Jersey native who worked on the same pipe organ decades ago. Balconies that were made of plaster – to replace wooden balconies that were damaged in a fire in 1930 – were also refurbished and made to look like hardwood, as was a 3 ½-story-high pipe organ screen. Finally, among other renovations, a four-lane bowling alley in the church’s basement, installed decades ago as part of a youth recreation area, was refurbished and dubbed “AudiBowl.”

Essex County Executive Joe DiVincenzo, Jr. commented that Audible is putting Newark, Essex County and the rest of New Jersey on the map. “Don Katz has done everything he said he would do. He has followed through and the company keeps on expanding,” he said, calling the renovated church, “The best thing I have ever seen!”

On Newark’s continued growth, he credits corporations such as Audible, Prudential, Panasonic, M&M Mars, and Fidelco Realty Group, and others, for their continued support of the city. “These companies are taking it to another level. … I couldn’t be more proud, especially when thinking about what the city went through in the 1960s,” DiVincenzo said.

Chip Hallock, president and CEO of the Newark Regional Business Partner, commented, “Audible has made a huge commitment to the city, and its creativity, innovation and inspiration all come through for Newark in this project.”