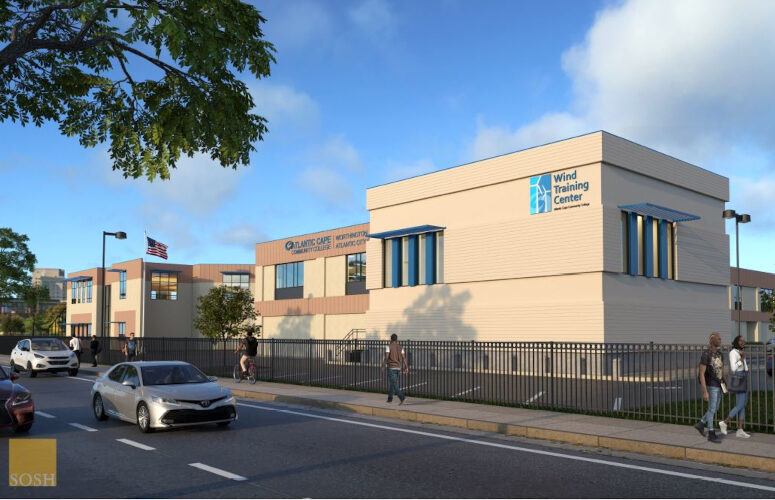 “Offshore wind on the Atlantic Coast holds enormous potential to spur economic development and diversification in our region, which is needed now more than ever as we begin to recover from the pandemic,” Atlantic Cape President Dr. Barbara Gaba said. “We are excited to be able to play a key role in this clean energy transformation by providing the necessary education and workforce training programming to support this burgeoning industry.”

The Wind Training Center at Atlantic Cape is funded by the New Jersey Offshore Wind Safety Training Challenge grant, awarded to the college in July and administered by the Office of the Secretary of Higher Education with the support of the New Jersey Economic Development Authority. Through the grant, the college will establish an industry-recognized Global Wind Organization (GWO) safety training program and facility to prepare New Jersey workers for jobs in the state’s growing offshore wind industry, as well as establish a Sea Survival module at Gardner’s Basin.

“The Wind Training Center at Atlantic Cape will be a tremendous asset to our state’s clean energy infrastructure. It is preparing the Atlantic City region’s workforce for good-paying jobs in offshore wind while diversifying the city’s economy,” said Lt. Governor Sheila Oliver, who serves as Commissioner of the Department of Community Affairs. “By investing in the Blue Economy, the administration is getting closer to reaching our clean energy goal of generating 7.5 gigawatts of offshore wind power by 2035.”

Atlantic City Mayor Marty Small Sr. applauded the college and the state for its investment into a new industry in Atlantic City.

“We’re excited to welcome the Wind Training Center to Atlantic City and to host the in-water training portion of this program in Gardner’s Basin,” Atlantic City Mayor Marty Small Sr. said. “With the build out of these training facilities, we’re stepping up for our community by providing hundreds of jobs and a path to stable employment. We look forward to continuing our partnership with Atlantic Cape Community College on this historic project.” The college’s GWO-certified partners Arcon Training Center, AIS Training and 3t Energy Group have been working with Atlantic Cape officials over the last several months to bring this project to fruition.

“We plan to open the doors of the Training Center by the fall of 2022, when future offshore wind technicians and other offshore workers from all over the country will travel to Atlantic City to complete their safety training,” Gaba explained. “We expect to train more than 1,800 students working in the offshore wind industry within the first year.”

Gaba also announced that the Atlantic Cape Foundation has pledged $25,000 toward scholarships for students enrolled in the Wind Training Center program.

“This represents a monumental step forward as New Jersey continues to position itself as a global leader in the clean energy space, and fostering opportunities for our workforce to advance in its growth. A wave of offshore wind projects slated for development along the East Coast over the next decade will create a once in a generation opportunity for eco growth,” said Secretary of Higher Education Dr.

Brian Bridges, who spoke during the groundbreaking. “There’s no better place to grow the offshore wind industry than right here in New Jersey. And I’m thrilled that the Wind Training Center on Atlantic Cape’s campus will prepare our students for careers in New Jersey’s growing offshore wind sector and open their eyes to fields they may not have even considered.”

Currently, Ørsted is developing two offshore wind projects off the coast of New Jersey with the capacity to generate more than 2,200MW of clean energy. Ørsted’s first project, Ocean Wind 1, received approval from the New Jersey Board of Public Utilities in 2019, and the second Ocean Wind 2, received BPU approval in June 2021.

There have been three offshore wind projects approved to date from the New Jersey Board of Public Utilities, representing half of the state’s goal for clean energy. These projects will power 1.6 million homes, inject $4.7 billion into the state’s economy and create thousands of jobs, said Jim Ferris, Bureau Chief of New Technology, Clean Energy Division, BPU.

“But in order for us to take advantage of those economic benefits, we need a trained workforce. And that’s why this groundbreaking today for this training facility is so important and is such an important step forward,” Ferris said Thursday. “This facility will train the offshore wind workforce that we will need for our projects. It will also train a workforce for other projects that will be happening along the East Coast.”

“We commend Dr. Gaba and the leadership of Atlantic Cape Community College for their pursuit in preparing to train workers to be a part of the growing field of offshore wind development,” said Davon McCurry, Ørsted deputy head of government and market affairs for New Jersey. “In the next few years, we will open an operations and maintenance facility in Atlantic City, close to the Wind Training Center and we look forward to working with ACCC in the development and deployment of these career opportunities.”