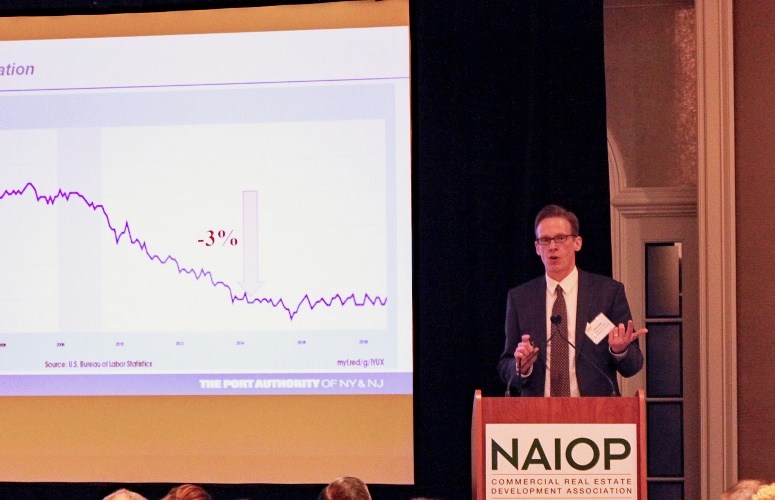 An economic slowdown and the rise of a range of market disruptors will impact the commercial real estate industry in 2019, according to speakers at NAIOP New Jersey’s Annual Meeting and Commercial Real Estate Outlook. A sell-out crowd of over 325 industry professionals attended the event at the Short Hills Hilton, which included the election of the commercial real estate development association’s 2019 officers and trustees.

Eugene Preston of Dermody Properties, who assumed the role of chapter president from Elberon Development Group’s Dave Gibbons, said, “NAIOP New Jersey is an advocacy group, and that is our main mission as we head into another important year. The entire 80-seat Assembly is up in November and we have to stand guard on the issues that are important to all of us to keep our industry and the economy growing.”

A Slowdown in Economic Growth Expected in 2019

Dr. Alexander Heil, chief economist for the Port Authority of New York and New Jersey, provided an overview of the economic outlook for 2019. “2018 was a great year,” said Heil, citing highlights that included a strong GDP due to consumer spending and solid employment growth nationally and regionally.

However, key areas of concern included minimal wage growth, a decline in labor force participation and the stock market volatility that dominated the second half of the year. “In 62 trading days, we saw a total decline of 19.6 percent and 25 days with a one percent change or more. By comparison, in 2017 there were zero days.”

Heil noted that the prolonged government shutdown has already had negative consequences for the first quarter of this year. “As of now, we can expect to see 0.52 percent lower growth for the quarter as a result.” In 2019, he expects a slowdown in economic growth nationally and regionally. “Last year the economy had plenty of support from the fiscal side, but we see this diminishing in 2019 and 2020.”

Heil cited indicators ranging from an inversion in the yield curve, tariffs and rising interest rates to tax law changes and the impact of global warming on the region’s transportation infrastructure. “The hope of a regional economy hinges on an efficient transportation system, and the impact of facility shutdowns as a result of major weather events in the Northeast has been significant.”

Although he stopped short of predicting a recession in 2019, Heil said, “We should see an inversion by late summer, and then the clock is ticking. By the middle of 2020 there will be a significant slowdown of activity, if not an out and out recession.”

Personal Choice is the Great Disruptor

Although the Amazon HQ2 RFP process was a disruptive force in New Jersey, a panel of industry experts and local economic development leaders agreed that it was just one of the major disruptors impacting the CRE industry. Citing factors ranging from automation and co-working to ridesharing, panel moderator Tim Lizura, senior vice president of real estate and capital projects for the New Jersey Performing Arts Center, said, “Ultimately, the disruptor is personal choice, and it’s changing the real estate industry.”

Amazon’s high-profile search for an East Coast headquarters certainly had a significant impact on the City of Newark. “We knew from day one we had a 50/50 chance,” said Aisha Glover, president and CEO of the Newark Alliance, who led the city’s efforts to woo the technology giant. “Win or lose, we focused on how we could leverage this moment to reshape the narrative, not only of the city, but of the state.” Glover added that the process “changed how we thought about corporate attraction. We made sure we were putting together a strong package that wasn’t a one-off, but that we can use again and again to attract businesses.”

While the consumer’s love affair with e-commerce has revolutionized the way package delivery is handled, Mack-Cali Realty Corporation CEO Michael DeMarco noted, “Another unintended consequence of all these packages is returns.” Asked how this issue might be a real estate disruptor, Rockefeller Group Senior Vice President Mark Shearer said, “Right now, return centers are largely concentrated in the center of the country. But it would not surprise me if, over the next five to 10 years, we see these facilities replacing some of the distribution centers that are closer to population centers such as in the Northeast.”

The panel also examined how the changing demands of office users have disrupted commercial real estate. “Co-working has been a big factor,” said Avi Orlansky, CEO of PrimeWork, which offers short-term office space solutions in suburban markets. “Co-working started with the rise of entrepreneurship, but more recently the focus has been on small to midsized businesses that need facilities and amenities, but don’t want to sign long-term contracts.”

Larger companies looking to create workplace efficiencies are also considering co-working spaces, which means providers need to ensure their buildings offer the dynamic features that attract corporate users. “Many co-working providers reside in traditional office buildings and are faced with the same issues as other landlords,” said DeMarco. As users require greater density than in the past, “landlords must be willing to invest in utilities, facilities and systems so their buildings can support client needs,” he added.

The question of whether or not ridesharing models (Uber, Lyft, etc.) are a disruptor drew a mixed response from panelists. Shearer commented that employees in Rockefeller Group’s office buildings typically use public transportation or drive their own cars, but Orlansky said that while PrimeWork’s buildings offer ample parking, “We do have a fair amount of people embracing the ridesharing concept, particularly where public transportation is not within walking distance.”

For Glover, the bigger issue is “connectivity for lower income folks within the City of Newark. Traveling via bus takes so long it’s unsustainable. A PATH extension will be critical for the city, and having a station in the South Ward will be a game changer for residents who live there.”