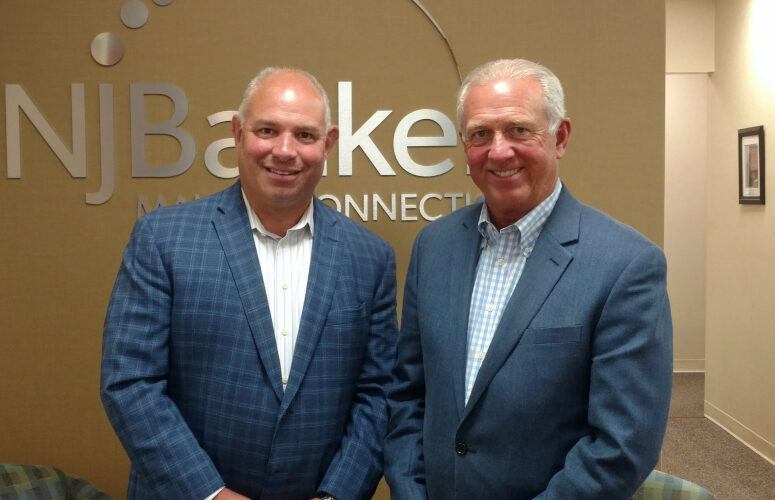 John McWeeney and Michael Affuso are banking industry experts who have been working side-by-side since 2008, tackling whatever challenges the economy has thrown in their paths. Their mission at NJBankers has always been to ensure the state’s banks were always up and running, serving New Jersey residents and businesses.

Today, McWeeney will officially step down as president and CEO of the trade association after a 43-year career in the banking industry. Affuso, who has been in charge of government affairs, will step into McWeeney’s shoes tomorrow.

Asked how they see the economy performing for the rest of 2022, McWeeney responded that a strong consumer market, coming out of pent-up demand caused by the COVID-19 pandemic, is currently balancing some of the negative headwinds the economy is facing, such as interest rate hikes, the rising price of gasoline, and global political issues. “It’s summertime and people have this incredible urge to go out and do things. … However, the more I listen to experts, clearly we are going to see a decline in growth. Whether we have an actual recession or not is up for debate. We may have stagflation where there is high inflation and low growth. The next 12 to 18 months are going to present some challenges,” he said.

Adding that the Federal Reserve was too accommodating with its monetary policy and waited too long in raising interest rates, McWeeney said the nation’s central bank now faces tough challenges in lowering inflation.

Affuso said a recession is a matter of when and not if. “Look at the price of gasoline, with the average person living paycheck to paycheck, there has to be some economic effect because of that. I am not very bullish,” he said.

McWeeney said there will also be a leveling off of commercial & industrial loans as the economy cools down. He points to Amazon trying to sublet millions of square feet of warehouse space across the country and in New Jersey, as an example of things cooling off.

In discussing federal regulations that will or may impact the banking industry, McWeeney said he hopes the Safe Banking Act, which would allow financial institutions to offer banking services to legally-operating cannabis businesses without fear of punishment, will pass. “Congress has been trying to pass this for the last two to three years. If it crosses the finish line, it would allow banks to offer services to legal cannabis businesses. Right now, a lot of these businesses deal [solely] in cash, and that is not a safe or secure business model,” McWeeney said.

“I think a fairly good percentage of our banks would jump into this because it will generate deposit business, fee income and support local communities as well,” Affuso added. “It will be a great boon for the cannabis industry itself.”

What may or may not be a boon for banks is competition with financial-technology (Fintech) firms that, in many cases, are partnering with smaller banks as the latter compete with larger banks in delivering advanced digital products and services to customers.

“Banks are going to have to partner with [Fintechs],” Affuso says. One example Affuso provides concerns a small bank member that has partnered with a Fintech so that it could offer credit, almost instantaneously, to people undergoing home renovations. In this example, a contractor and a bank have an affinity agreement with the Fintech that allows for almost instant underwriting and instant credit availability. “That is an amazing thing,” Affuso says.

On the flip side, he says there were businesses that went directly to Fintechs for Paycheck Protection Program loans during the height of the COVID-19 pandemic who “fell into a black hole if they had a problem. … I think people value the speed and efficiency of Fintechs, but Fintechs need the partnership of a banking institution to have that human touch when necessary,” Affuso said.

McWeeney added, “Our banks have to innovate, or they won’t survive. While customer service is traditionally defined as good local decision making at your branch office with people who are courteous, friendly, and who processed business in a timely fashion, today it is also defined as who has the best app.

“So, banks have to innovate. If they don’t have the resources to do it themselves, they need to partner with Fintechs to be able to do that. That is how smaller community banks can compete with larger banks,” McWeeney said.

The banking industry is also facing a war for talent, both nationally and in the Garden State. Affuso explained it is more severe in New Jersey because college graduates here with finance degrees can go to New York City. “It is not lost on us that we are next to Wall Street,” Affuso said. “We need to make the industry [in New Jersey] attractive to graduates. We try to attract them via internship opportunities and guaranteed slots [positions].”

He said that the types of positions are changing and that there is more of a need for “technologists” today than “traditional bankers.”

McWeeney added that a “double-edged sword” exists in that the COVID-19 pandemic gave rise to an increased use of technology, which accelerated the digitization of the banking industry by three to five years. In turn, this increased remote work scenarios, which caused the potential talent pool to look for jobs outside of the state.  By the same token, he said local banks can now hire talent from other states and regions.

Besides talent, bank consolidation is something NJBankers is also concerned with. “This is our least favorite subject,” McWeeney said. As of March 31, 2022, there were 58 New Jersey-headquartered banks, and close to 100 banks total, conducting business in the state. “If you go back to 2020, there were 64 headquartered banks here. Go back five years and it was 85. Go back 10 years and it was 111. This is the trend and it’s not going to change, though it may slow down.” McWeeney said. “It is being driven by banks needing to scale.” He explained that small banks can scale by looking for outside service providers [Fintechs] or merging with larger institutions.

In looking at the employment picture, New Jersey’s 58 headquartered banks employ some 19,000 people (a decrease of 3,000 over a 10-year period). According to Affuso, when all FDIC insured and SEC-type institutions are included, this number jumps to 87,000, based on a Rutgers University report.

Even though consolidation has occurred, McWeeney says the industry has grown, with banks reporting stronger balance sheets and higher loan and deposit volumes and more capital. “Our banks are well positioned to support whatever happens in the economy,” he said.

It has been McWeeney’s job to make sure the state’s banking industry flourished and survived the various challenges of the past 15 years while he was at the helm of NJBankers. He has helped the industry through the Great Recession, Superstorm Sandy and, most recently, the COVID-19 pandemic.

Talking about the industry and the people he has met, he said, “One thing that hasn’t changed in my 43-year career is that bankers are still great people trying to help other people. They are committed to their communities and the level of philanthropy and volunteering is genuine. It was never more real than during the pandemic.”

Commenting on Affuso’s taking over as NJBankers president and CEO, McWeeney said, “Mike is a very passionate individual who is driven to succeed. He has an incredible work ethic and has built strong relationships with our members and government leaders in Trenton. I can’t think of anybody better prepared to step into this role.”

For Affuso, McWeeney was the epitome of calm under pressure. “His calm is contagious and is important if you are going from fire to fire. If you were going to do a master class on leadership, it would be on the ability to maintain a level of calm. … And basically, I learned everything about banking from John,” Affuso said.

Affuso’s top priority as the new president and CEO of NJBankers is to stay ahead of the industry consolidation curve. Additionally, he said, “We have to bring the best technology and innovation to our banks.”

He looks forward to visiting NJBankers’ members and discussing their endeavors. “Banks are in the business off having people coming in and saying, ‘I have an idea. Can you fund it!’ I find it all fascinating.”

NJ Employers Add to Payrolls for 5th Straight Month in May