The small business labor shortage is still a major threat to the recovery of many different industries, nine months after it began. Alignable’s Small Business Labor Poll, conducted among 6,367 small businesses from 1/15/22 to 2/3/22, shows that 60% of all small business employers in the U.S. still can’t find the right workers to fill open jobs.

Many industries and disadvantaged groups of small business owners cite percentages that are much higher than the already-daunting 60% figure — demonstrating the cumulative effects of this months-long hiring crisis.

In many cases, if companies like retail shops and restaurants don’t have the staff to help them stay open, they don’t generate the revenue they normally could. Many need to cut their hours, which further exacerbates their economic status — and doesn’t inspire much consumer confidence in the health of their businesses, either.

Other issues that have also slowed or reversed recoveries include Omicron.

The reduced revenue and hours, coupled with Omicron fears, contributed to rather alarming recovery statistics showing that only 14% of restaurants across the U.S. say they’ve fully recovered — that’s down 18% from 32% in December.

For retailers, the recovery situation has dimmed, as well, as 41% said they were fully recovered during the height of the holiday shopping season in December. But now that percentage has tumbled 13% to only 28% of retailers saying they’re at or above pre-COVID levels of monthly revenue.

The following chart shows the industries struggling the most with the ongoing labor shortage — and it’s no surprise that restaurants and retailers are prominently displayed here. 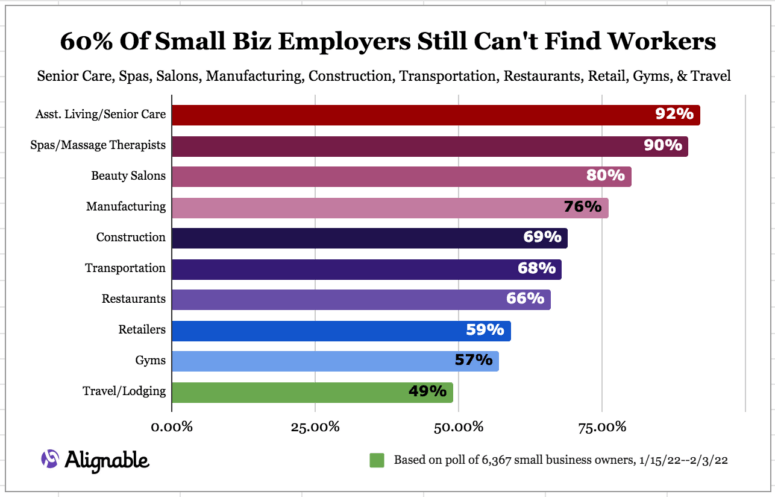 As you can see, 66% of all restaurants and 59% of all retailers say they still can’t source enough help.

Beyond those two industries that have really struggled, you have 92% of small businesses in the Assisted Living/Senior Care sector saying they are short-staffed and can’t find enough help to serve their aging population.

Making it worse for them, many have reported that Omicron forced several shutdowns of these facilities from coast to coast to help protect their residents. People running these facilities have commented repeatedly over the past nine months about how much staffers just come and go at these places, leading to constant staffing uncertainty.

Other small businesses that are really suffering with significant staffing shortages include:

Just looking at this list, it’s not surprising to understand how the small business recovery rate from December dropped 13% from 43% to 30% in January.

As see below, many industries suffering from labor shortages also experienced recovery reversals — with some being quite severe. The percentage of construction companies that recovered dropped 19%, for beauty shops, it was 18% (similar to restaurants), and transportation operations dipped 17%.

For two months in a row, 67% of minority-owned businesses say they haven’t been able to hire the right people to help fuel their revenues.

And women-owned businesses are not far behind at 63%, up 5% from December. The group that’s not as impacted is veterans, but still, 46% of any SMB group saying they can’t find enough employees is still quite high. 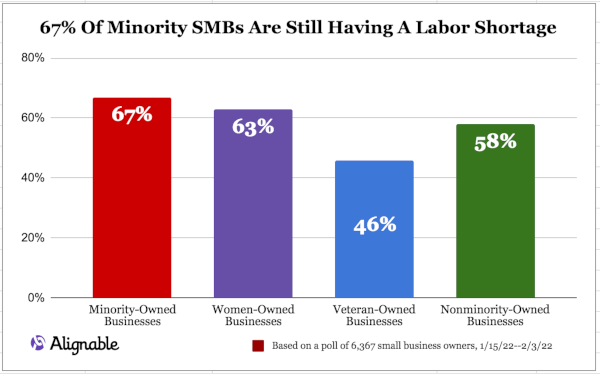 Looking at labor shortage rates across several states shows that this is a problem with no geographic boundaries, and likely won’t be resolved anytime soon. In all of these major states, the majority of small business employers can’t fully staff their establishments, offices, or remote crews. This all adds up to a rather alarming situation.

California leads the pack with 65% of small businesses noting that sourcing the right people to hire is challenging. And in California, that rate jumped by 4% from 61% in December.

Now there is one silver lining here: New York-based small businesses did see some improvement in their labor shortage rates from December to January — they decreased 9% from 61% to 52%. But let’s see if that trend continues in the next month or two.

New Jersey Business Owners Are Most Likely to Be Approved for a Loan, According to New Report by Biz2Credit