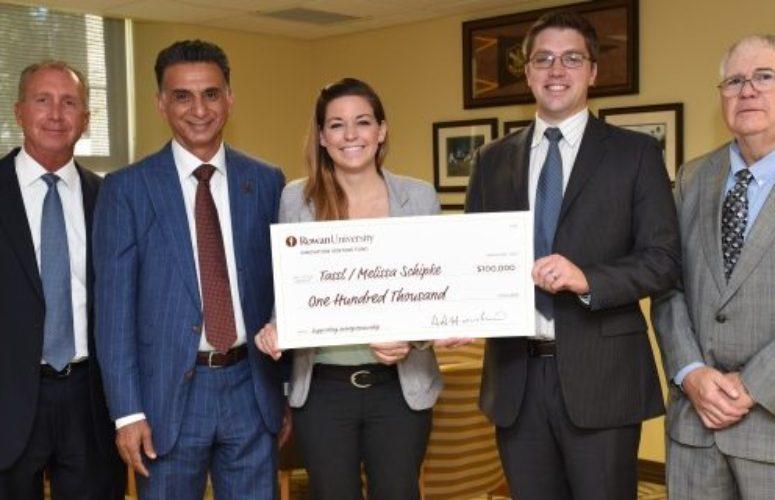 Rowan University senior Nicholas Dennis and young alum Melissa Schipke have great ideas. Thanks to the Rowan University Innovation Venture Fund, each now has $100,000 to help bring those ideas to life.

The $5-million Fund, which is under the auspices of the Rowan University Foundation, awarded Dennis and Schipke its first-ever investments, after evaluating about 50 proposals for financing since the Fund started accepting applications last winter.

The Fund was created to support researchers, entrepreneurs, business owners and others in South Jersey, including Rowan faculty, students and alumni as well as area residents. Among the Fund’s goals are to accelerate the growth of Rowan’s research initiatives and foster initiatives of South Jersey residents and companies, whether technologies, intellectual property, inventions or businesses.

“The Venture Fund is unique to our region, and it reflects Rowan University’s commitment to South Jersey, to our push to increase commercialization and technology development efforts, particularly in growth sectors such as engineering, medical education, health sciences and business,” said Dr. Ali Houshmand, president. “As a research institution, it’s imperative that we support the people who are today’s entrepreneurs and tomorrow’s business leaders, the people who will bring jobs to our region and in some cases solve some of society’s problems.”

Dennis, 22, a senior mathematics major with a minor in business administration and concentration in statistics from Oak Ridge (Morris County), is the founder and CEO of fitDEGREE.

Dubbed “The Social Network for the Fitness Community,” fitDEGREE uses social media applications to connect users to potential exercise partners and fitness groups in the area as they work to reach their fitness goals.

A two-year employee of the Rowan Student Recreation Center who exercises five to six days a week, Dennis was inspired to create fitDEGREE when Rec Center employees discussed how to increase foot traffic in their facility. He realized through his own personal experience that his friends were highly active in the gym when they were fitness partners; however, once he was unable to continue, their interest and motivation to work out plummeted.

“Most people are more inclined to get active when they have a friend, either because it’s a fun, social experience or it motivates them and keeps them accountable,” said Dennis, whose firm’s first market is colleges.

Dennis said his mobile IOS and Android-compatible app is free, and he will launch it at Rowan in late September. He has other confidential revenue-generating plans for fitDEGREE in the works.

Schipke, 28, of Cherry Hill, is a 2014 MBA graduate and the co-founder (with Cornell University graduate James Maxwell) and CEO of Tassl. Her company uses mobile and software technologies to enhance college alumni networks and communities.

She explained, “We’re an alumni engagement platform that develops software as a service and a mobile app to better engage alumni in the marketplace. The mobile app is interactive, providing alumni with a portal to all the resources they would want as alums. It’s gamified, with challenges and awards to make it fun to be an alum and be recognized for the time you’ve contributed to your alma mater.”

Users may update their profiles, find other alumni in the area, tap into relevant news and resources and scope out nearby events, among other features. Also free (now for IOS devices and shortly for Androids) and available at the App Store, Tassl already is in use at Rowan, Temple University and Big 10 schools.

Both she and Dennis are excited about the funding.

“We’re very excited,” said Schipke of her team. “We are really so thankful to have the support of my alma mater and to move the company forward even faster than we had planned.”

“This process has been stressful, yet exhilarating. I was forced to learn quickly, but between the experience of the Business Plan Competition hosted by the Rohrer College of Business and the guidance of Rowan faculty such as Steve Kozachyn and Dr. Dan McFarland, I was able to not only learn, but thrive,” Dennis said. “The Rowan Venture Fund is giving me life to let my dream come true, and I could not be more grateful.”

“These investments are just the beginning of what we expect to be a very competitive and highly fruitful process,” said Tony Calabrese, chairman of the Fund’s Board of Managers and a member of the Rowan University Foundation’s Board of Directors. “The Fund is committed to supporting strong proposals that will result in the development of viable businesses that will contribute to the economy of South Jersey.”