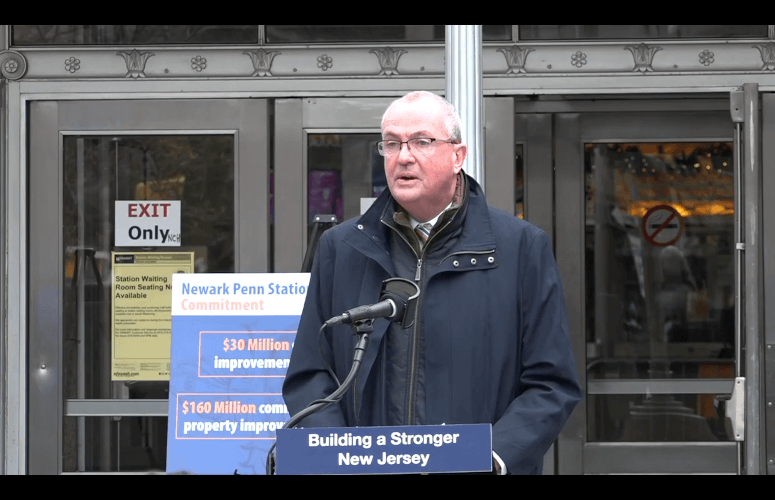 Gov. Phil Murphy today announced a commitment of $190 million for renovations and upgrades at historic Newark Penn Station. The work is slated to begin immediately with $30 million in renovations and restorations, with additional upgrades scheduled over the next five years totaling $160 million. The upgrades will be funded by the state.

Opened in 1935, Newark Penn Station is the seventh busiest rail station in North America and one of the busiest stations in the region. It was originally designed and still operates as an intermodal facility serving pedestrian, taxi, bus and private vehicle traffic generated by the more than 50,000 transit customers who use the station each day.

“Penn Station is a vital hub not just for those heading to New York City each day, but it is also a gateway to Newark and the resurgence that has taken place here over the past two decades,” said Governor Murphy. “We are thrilled to announce these renovations, which, when completed, will help restore this historic station to its former glory.”

The first phase of renovations will focus on aesthetics such as restoration of the classic benches in the waiting room, installation of brighter lighting, updating of the bathrooms, improved HVAC and air-handling, fresh paint and tile, and a deep clean of the limestone exterior to once again showcase the architecturally significant façade.

In the bus lanes, new lighting and improved drainage will improve the rider experience. And improved directional and way-finding signage will help make sense of this station’s labyrinth of platforms and hallways.

“There is no more iconic or well-traversed landmark in the state than Newark Penn Station and it is long past due that it receives the critical repairs and upgrades that are needed,” said Lt. Governor Sheila Oliver, who serves as Commissioner of the Department of Community Affairs. “I am so pleased that Governor Murphy and NJ Transit are making this tremendous investment in our state’s infrastructure that will not only serve our commuters but also generate the type of economic revitalization that Newark and the surrounding communities require to thrive.”

“Newark is the largest city in the state and Penn Station is a major gateway for commerce, employment, and economic development. It is good news that this administration understands the importance of this and are committed to ensuring that this critical piece of infrastructure has significant investment,” said Newark Mayor Ras Baraka. “We welcome Governor Murphy’s $190 million state-funded program to upgrade, renovate, rebuild, and remodel Newark Penn Station. This project is important for New Jersey as a whole, for our region, and for Newark particularly.”

“We’re extremely grateful to Governor Murphy and Commissioner Gutierrez-Scaccetti for this generous financial commitment that will allow us to restore this historic station to its former glory,” said NJ TRANSIT President and CEO Kevin Corbett. “Consistent with the goals laid out in our recently released 10-Year Strategic Plan, NJT2030, this additional funding will allow us to perform the necessary work that will improve the travel experience for the thousands of customers who travel through Newark Penn Station every day.”

“After I secured $18 million in federal funding to improve Penn Station this year, I knew it would need state funding to provide safe and reliable transportation for millions of Americans in Newark and throughout the country,” said Congressman Donald M. Payne, Jr.  “This additional $190 million for renovations and restorations will help the station survive the coronavirus global pandemic and improve the station for workers and commuters for years to come.”

“New Jersey’s commitment to making this investment will benefit the country, the state, the greatest city, Newark, New Jersey but most importantly the commuters who use it as part of their daily lives,” said Senator Teresa Ruiz. “I commend Governor Murphy’s commitment to improve our infrastructure and I look forward to seeing the impact it has on our city and beyond.”

Port of NY/NJ at Strongest Competitive Position in Decades