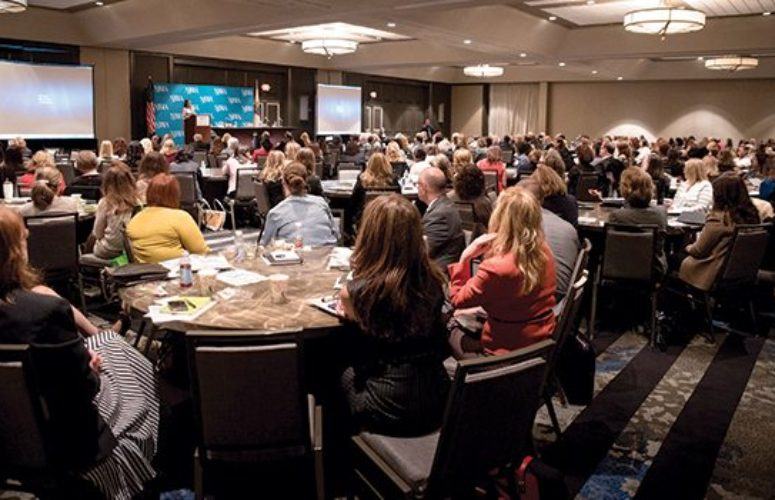 The photos above, from NJBIA’s Women Business Leaders Forum, capture the deep discussions and overall networking that occurred during the September 25th event at the Hilton Parsippany.

Women from across the Garden State streamed into the Hilton Parsippany on September 25 for the New Jersey Business & Industry Association’s (NJBIA) inaugural Women Business Leaders Forum. The event commenced with NJBIA President and CEO Michele N. Siekerka noting that only 4.6 percent of CEO positions at S&P companies are held by women, that the event’s “dynamic speakers” would explore the importance of being a leader, and that attendees would learn associated skills.

Throughout the day, powerful leaders ranging from Wells Fargo & Company’s Brenda Ross-Dulan and Johnson & Johnson’s Kathryn E. Wengel, to Lt. Governor Kim Guadagno and Candace L. Straight (a private investor, investment banking consultant and film producer) – in addition to other leaders – inculcated the audience with their words of wisdom.

Overall, while women face many of the same challenges as their male counterparts, some obstacles and experiences are unique to their gender. For instance, NJBIA’s Siekerka – whose long and successful career spans both private-sector legal work and public-sector leadership – advised that women “be proactive, but not too aggressive,” suggesting that women who are overly aggressive may be viewed in a negative light.

Among her numerous other tips, she encouraged attendees not to be afraid to “put [themselves] in a man’s world,” and said they need to be ready when professional career opportunities arise. She also said that many people align themselves with those who have passion for what they do, and that women need to have “passion [for their work] and urgency.”

The passion motif was later echoed by Caren S. Franzini, president of Franzini Consulting, LLC, who had a long and prominent tenure as CEO of the New Jersey Economic Development Authority (EDA). On the topic of becoming a female board member, she too noted that it is critical for women to sit on boards for which they have a “passion.”

Other oft-repeated event themes examined the importance of networking and professional relationships, and appropriate risk-taking when advancing one’s career.

Meanwhile, at one point, Brenda Ross-Dulan, executive vice president and Southern New Jersey region president, Wells Fargo & Company, spoke about her move from Los Angeles to New Jersey, and that, in effect, while that was an important career advancement, women must also talk about the “real story [regarding] the fullness of their lives.” For example, at that time, Ross-Dulan discovered that her daughter was crying each day, at home, in New Jersey. She “wanted to make sure that her daughter was” okay. Today, her daughter and son are doing very well, including educational graduations, but Ross-Dulan was underscoring the importance of speaking about the totality of one’s life, and not just its business aspects.

Much of the advice disseminated at NJBIA’s forum was relevant for both women and men. For example, Celestina S. Quintana, owner/operator of 11 McDonald’s Restaurants, examined the importance learning a foreign language in order to be successful, while Kathryn E. Wengel, vice president, Johnson & Johnson Supply Chain, underscored why it is critical to be a “life-long learner.”

NJBIA’s event occurred against a broader societal backdrop in which women are increasingly attaining higher education degrees and entering the workforce. Their aggregate rise to success will likely be even more noticeable when women commonly assume prominent leadership roles. In the meantime, creating powerful networks (such as through NJBIA’s event) and fostering personal leadership skills are key to advancing women’s ongoing achievements.