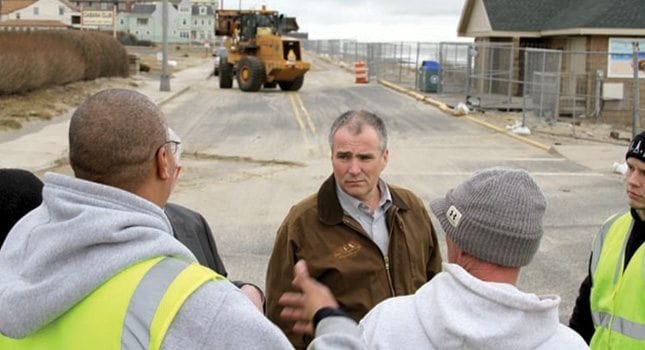 Labor Commissioner Harold J. Wirths talks with a team of workers in Long Branch that were hired through a National Emergency Grant to assist with Sandy recovery work. Commissioner Wirths toured the Long Branch and Union Beach areas with officials from Monmouth County and the U.S. Department of Labor.

Wirths Hard at Work for NJ

State labor commissioner wants people to change the way they view his department - from an unemployment benefits provider to a re-employment service.

For Harold J. “Hal” Wirths, the go-getter New Jersey labor commissioner who has remade his department into a business-friendly, fraud-fighting machine, an interest in politics runs in the family, though not necessarily in his blood.

Hal Wirths’ father was Wallace Wirths, a Sussex County icon who was a freeholder, newspaper columnist and radio commentator who adopted him “when my real dad took off,” says the 48-year-old New Jersey native who was a small business owner before Gov. Chris Christie tapped him to lead the Department of Labor and Workforce Development in January 2010.

“I guess I got the bug from him,” Wirths continues. “I wouldn’t be here without the mentoring of Wally Wirths.”

He met the man whose name he would take as his own through the Big Brothers program in the 1970s. Hal Wirths followed in his father’s footsteps and served as a Sussex County freeholder. He also owned and managed two furniture stores for 18 years before selling them in 2004 and was a founder of Noble Community Bank, which today is part of Highlands State Bank, and served on the Highlands Bank’s board of directors.

Wirths, who lives in Wantage with his wife and two daughters, says he first met Gov. Christie at a ribbon cutting in Sussex County and was a big fan. So “it was a huge honor when the governor asked me to come and serve in his administration,” he says.

It hasn’t been easy. He came in while the state was in the midst of what is now being called the Great Recession. In 2010, the state’s unemployment rate was 9.6 percent, with 437,000 people out of work. In October 2012, Superstorm Sandy hit New Jersey, worsening the state’s employment picture as the destruction forced the closure of numerous businesses, either temporarily or permanently. In the month following Sandy, new claims for unemployment rose by 154,000, the most in New Jersey history.

Wirths and the department received a special SEAL award from the National Association of State Workforce Agencies this year for its post-Sandy assistance.

“Well before the storm hit, the New Jersey Department of Labor and Workforce Development (LWD) mobilized its entire staff to prepare for an active role in the recovery and rebuilding effort,” NASWA wrote in praising the department’s actions. “The LWD was able to quickly respond to address the dramatic rise in demand for services at a time when most transportation, energy and communications systems were either inoperable or in disarray. The LWD marshaled its infrastructure of existing services to address the fast changing demands of New Jersey residents and businesses.”

It noted the department partnered with the Federal Emergency Management Agency (FEMA) to station staff in Disaster Recovery Centers (DRCs) throughout the State, distributed informational help-sheets (in English and Spanish) to jobseekers and businesses at DRCs and shelters, gave displaced workers and business owners free access to phones, fax machines and computers at the state’s One-Stop Career Centers and established a “SandyHelp” hotline and e-mail address.

The department also received a $15-million National Emergency Grant that took 787 people off the unemployment rolls to do recovery work for local governments and state agencies. FEMA used the state’s online job search engine to help fill 76 positions. And the department got a federal disaster unemployment insurance grant to provide benefits for 3,400 people who otherwise would not have been eligible.

Wirths says the recognition was gratifying, particularly as it was “given by my colleagues.”

Emergencies aside, Wirths says Christie’s work as US Attorney inspired him to make fighting corruption a top priority, bringing a savings of $330 million to date. He created a separate division within the department to address fraud prevention and risk management issues. It is attacking fraud on a number of fronts.

The most common type of fraud involves those who continue to collect unemployment benefits after finding another job. To combact this, an LWD program cross-checks state and national new hires directories to determine if those collecting unemployment have returned to work. It has led to 51,000 people being removed from the unemployment rolls for collecting benefits illegally and a savings of $272 million.

Another part of the effort uses software that identifies the Internet Protocol addresses of those who file a claim online so the state can find those filing claims from outside the United States – it is illegal to collect unemployment while out of the country. The software, which cost only $1,600, has caught 6,000 people, including an elderly, retired couple filing false claims from a cruise ship.

The department also now requires those filing for benefits to answer a series of personal questions based on public records, requiring those who cannot do so to provide proof of identity in person at a One-Stop Career Center. And officials are also cross-matching claims to verify that a person is not currently incarcerated in state or county prison.

“The real savings is in stopping the money from leaving the trust fund,” Wirths says. “A huge part of my legacy will be getting the [unemployment insurance] trust fund in the black. Once that happens, businesses will start having an automatic tax decrease going forward.”

New Jersey’s unemployment trust fund went into the red in March 2009 following years of state diversions of funds for other purposes. At one point, the state owed the federal government $2.1 billion. It had to raise unemployment taxes to pay back the debt. Wirths says the fund briefly went into the black last fall and expects to become permanently solvent ahead of schedule, in early 2014.

The department’s anti-fraud efforts don’t stop at unemployment benefits, but extend to worker’s compensation payments, too.

Coming from a business background, Wirths brought to his office the mantra that government should operate more like a business. As part of that, he sought input from business leaders to help remake the department into one seeking to better link job-seekers with employers in industry sectors that will drive the state’s future economy.

Under his leadership, the department has taken numerous steps to help New Jersey businesses. For instance, the DOL has:

Wirths is also proud of the progress made in helping out-of-work Jerseyans find jobs during the last four years.

One of the ways the department has helped the unemployed find jobs was the creation of the Jobs4Jersey website, which consolidated a number of other jobs sites into a one-stop location. Wirths says there are roughly 265,000 resumes posted on the site and 200,000 job openings.

“For small- and mid-sized businesses, it’s like a human resources department,” Wirths says. “It pulls out key words from resumes and e-mails jobseekers jobs based on skills. Employers get applicants rated on a 4-star system. It helps both sides. It’s absolutely free.”

The department also has set up “talent networks” in partnership with higher education institutions and businesses with a goal of helping to train workers in the skills actually needed for jobs that employers are trying to fill. The networks cover several sectors, including advanced manufacturing, healthcare, technology and entrepreneurship, transportation and distribution, and recovery from Sandy.

“There’s nothing crueler than training people for jobs that don’t exist,” says Wirths of the types of training programs traditionally funded. “The talent networks show where the jobs are in each county and then provide training for people in key industries.”

For instance, those involved in manufacturing identified a need for workers in prefabricated metal parts that Wirths called “goesintas” – parts that go into others. About 86 percent of people have been hired right out of the training.

The department has also started Jersey Jobs Clubs. There are 24 throughout the state, with 49,000 members. Each club has a career development professional who helps develop a strategy for successful job searching. It’s also a way to improve one’s resume, meet others, attend workshops, find volunteering opportunities and learn about fields in demand.

Wirths says he wants to change the way people view the department – from an unemployment benefits provider to a re-employment service. This includes being proactive and trying to help employees who receive a 60-day warning notice, even before they are laid off.

But the job involves balancing the interests of workers and employers, never forgetting the importance of a healthy business environment.

“We are going to try to do everything we can to be as business-friendly as we can,” he says. “Without businesses, we would have no jobs.”