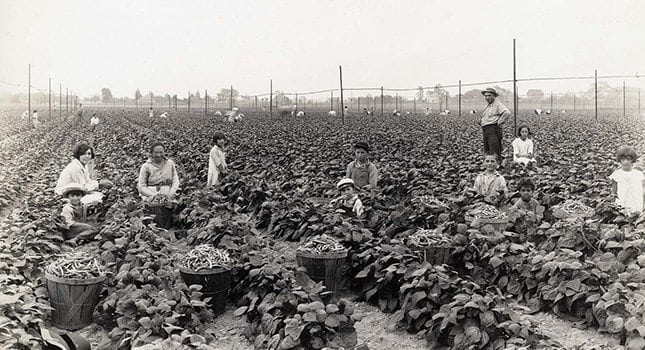 New Jersey still maintains its name, “The Garden State,” as the state boasts more than 733,000 acres of farmland. We are among the top-10 states in the production of cranberries, blueberries, apples, sweet corn and more. This image shows that after many years of agricultural innovation, farming remains a basic process of planting seeds and reaping produce. Photo Credit: New Jersey State Archives, Department of State

Why the Title ‘The Garden State’ Still Prevails

New Jersey’s nickname, the Garden State, dates back to the late 1800s. According to a book by Alfred Heston in 1926, Abraham Browning of Camden called New Jersey the Garden State while speaking at the Philadelphia Centennial Exhibition on New Jersey Day. He called “our Garden State” an immense barrel, filled with good things to eat and open at both ends, with Pennsylvanians at one end and New Yorkers at the other.

New Jersey farms grow a wide array of items, including more than 100 different varieties of fruits and vegetables, and the state ranks in the top-10 states in the nation for production of cranberries, bell peppers, spinach, blueberries, peaches, cucumbers, squash, tomatoes, apples, sweet corn and snap beans.

To promote the state’s produce industry, the Department of Agriculture developed the Jersey Fresh branding program in 1984, making it the first of its kind in the nation. The Jersey Fresh logo informs consumers about the availability and variety of fruits and vegetables grown in New Jersey. A survey conducted in December 2012 found a large majority of New Jersey residents had purchased Jersey Fresh products and two-thirds of the population planned to buy Jersey Fresh in the future. The respondents also felt popular New Jersey items, such as tomatoes and sweet corn, are thought to be superior to those grown in other states. Additionally, restaurants that offered Jersey Fresh dishes were thought to be of higher quality.

Organic products have increased in popularity. The Department is a US Department of Agriculture-accredited Organic Certifier of crops, livestock, wild crafting and food processing operations. The program currently certifies 58 farms with more than 1,820 acres, as well as 23 food handlers.

Horticulture, which consists of nursery, greenhouse, sod and Christmas trees, is a major industry in New Jersey, ranking eighth in the nation, with $444.8 million in sales in 2012. New Jersey holds a place in Christmas tree history, with the first Christmas tree farm started outside of Trenton in 1901 with the planting of 25,000 Norway Spruce.

The wine industry is coming on strong. The number of New Jersey wineries has tripled in the last decade. There are currently 48 wineries producing 1.56 million gallons of 40 different varieties of wine. New Jersey is the 10th largest wine producer and the 6th highest consumer of wine in the United States.

New Jersey, with its 130 miles of coastline, has a vibrant seafood industry, part of the greater agriculture industry. Commercial fishing brought in $211 million in 2011. The state is home to the second largest port on the East Coast and the fifth largest nationwide – the port of Cape May. Seafood landed by New Jersey fishermen, such as tuna, flounder, scallops, blue crabs, swordfish and tilefish, are sold locally and to restaurants and markets throughout the world.

New Jersey also has a growing aquaculture industry. Clam and oyster production, currently valued at $6 million annually, is expected to grow due to a combination of expanded production capability and innovative marketing strategies. The Department of Agriculture recently collaborated with the Department of Environmental Protection to establish Aquaculture Development Zones and streamline the regulatory process for producers.

The horse is New Jersey’s state animal and the equine industry is valued at $46 million. There are 42,000 horses in New Jersey and with 96,000 acres devoted solely to equine operations, the horse industry contributes significantly to the state’s open space. The United States Equestrian Team Foundation, the Hambletonian Society, the Gladstone Equestrian Association, The Horse Park of New Jersey, the Gloucester County DreamPark and the Breeders Crown all call the Garden State home.

Food and agriculture is the third largest industry in New Jersey and contributes greatly to the state and national economies. With world consumption of agricultural products on the rise, sustaining and growing our state’s farming industry is critical. Positioned where we are and with our productive lands and our farmers’ ingenuity, New Jersey will remain an agricultural leader. NJB

A Toast to New Jersey’s Wine, Beer and Distilling Industries