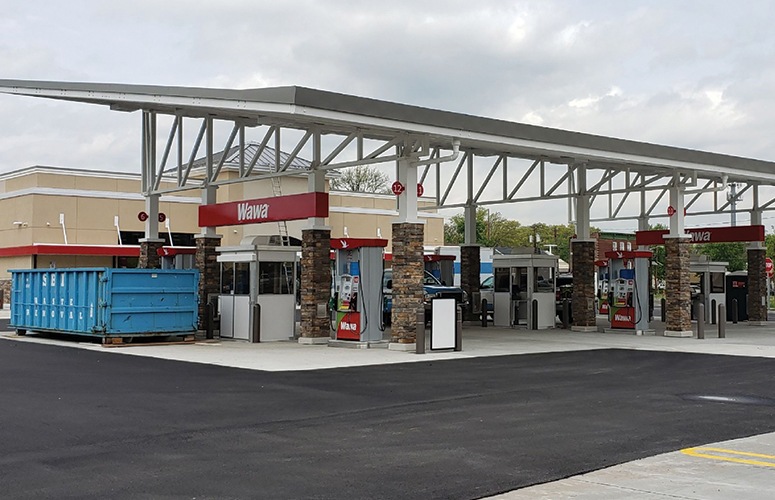 Maser Consulting helped clean this former brownfield site in Roselle, which is now a Wawa.
Environment

New Jersey has strong requirements for remediating contaminated sites, so it’s best to hire a licensed professional to handle the dirty work.

Any business looking to buy and develop property in New Jersey should know that chances are good that the land – particularly if it is in an urban area and was previously developed – has experienced some environmental contamination that may need to be investigated and remediated.

In such cases, a Licensed Site Remediation Professional (LSRP) will need to be involved to oversee the investigation of contaminants and remediation of the property. Licensed by the state, these professionals ensure that sites are made safe for public occupancy and expedite cleanups or other work needed to eliminate any threats to health from various contaminants.

“The ultimate goal is the protection of human health, the environment and public safety,” says Robert Zelley, director of environmental services for Maser Consulting and an LSRP.

Often, sites are found to contain volatile organic compounds (VOCs), which are numerous chemicals found in common household and workplace products, such as paints and solvents, cleansers and disinfectants, pesticides, dry-cleaned clothing, copiers and printers, and such craft supplies as glues and markers. VOCs can have a wide range of health effects – from headaches and nausea to kidney or liver damage and cancer.

Some locations are more likely than others to contain excessive levels of VOCs. These include the cities and urban areas, which had the greatest number of factories and similar operations, as well as any brownfield site that housed manufacturing and similar businesses. Former industrial sites, gas stations and landfills are just some examples of sites likely to have contamination. Sometimes land that would seem to be clean isn’t because chemical contamination has spread from a nearby property.

There were more than 13,700 contaminated sites in New Jersey at the end of 2018, according to the state Department of Environmental Protection Site Remediation Program website. That equates to about two sites every square mile.

The large number of sites is one reason why LSRPs say it is important for businesses to do their due diligence when considering property purchases or transfers, or other real estate transactions to try to identify any potential environmental concerns.

“Then an LSRP would get involved to investigate, identify and quantify areas of concerns. Then, this could be factored into the transaction by either the seller or the owner as part of the overall real estate transaction,” Zelley says.

Figuring out what contaminants may be on a property takes some detective work that typically starts with a preliminary assessment, which includes looking at the history of prior owners and uses of a given parcel. A prior cleanup of a property does not guarantee it is currently without contamination, because prior work may not have been done completely or substances previously not considered toxic have been added to the list of contaminants that need remediation.

“That’s basically a desktop-type survey where you collect all the records, you go through everything that the business did, and then you actually go out and you do a physical inspection of the business itself, and look for evidence of potential environmental impacts,” says Christopher Dailey, vice president and construction services manager at GEI. “Then, you basically write a report that would explain what you found and what your concerns are – we call them areas of concern.

“You develop a list of areas of concern, and then you would go out and do testing based off of that list,” adds Dailey, who is an LSRP.

The test results will dictate what kind of actions should be taken at a site, but there are other considerations, as well, that complicate the type of remediation that is recommended, according to Benjamin Alter, an LSRP and senior vice president of GZA, which has three locations in New Jersey.

“It very much depends on what the contamination is, both the types of chemicals and the concentrations of those chemicals,” Alter says. “But there are other factors, such as the type of geology that you’re dealing with and what’s in the ground. Is there a building or an underground pipeline in the way? In a perfect world, you can address the chemical in a strictly scientific way. In a state as densely populated as New Jersey, you often have to take into account logistical issues, as well, in deciding what type of cleanup you’re going to do.”

Under the right circumstances, contaminated soil can be contained on site with an environmental cap. A cap can prevent water from flowing down through the tainted earth and pushing the contaminants into the groundwater. It also isolates the soil so the public will not come into contact with it. A cap can be asphalt or concrete and used for a parking lot, or it can be another material covered by clay, sand and gravel and vegetation to become open space.

“Cap and cover is a very popular type of remediation in the nation and in New Jersey, especially if you’re dealing with contaminants that have their primary danger by ingestion or by dermal contact,” Alter says. “If you put a barrier, such as a concrete surface, between the contaminant and the person, you could have essentially remediated the issue because the danger to humans essentially would be eliminated.”

Other times, soil needs to be excavated, removed from a site and trucked to a special disposal facility, then replaced with clean soil.

Different remediation plans will carry different price tags. While saving money is usually a goal, LSRPs say environmental cleanups are not a place where choosing the lowest priced option is best. They will lay out choices and recommend what is needed to meet the state’s environmental standards. Sometimes that may be the most costly remediation.

In some cases, a business will choose a more expensive option to expedite a remediation in order to ensure it does not lose financing – or for other reasons.

“There are usually options that involve someone’s ability to pay less now but more over time, or more now, but take less time,” Zelley says. “I just had a conference call today and the words of the client were, ‘I don’t care about how much it costs, I care that I can be in by a certain date’. … They can tolerate spending an extra X amount of money, but they can’t tolerate missing deadlines and losing their construction loan.”

Some firms have created programs to try to deal with cost uncertainties. For instance, Parsippany-based EWMA, an environmental consulting and remediation firm, has created a program it calls SECUR-IT, which guarantees the scope and cost of a project before work begins and provides a predetermined length of remediation.

“Time and cost are the two most important metrics in real estate development,” Donald W. Richardson, EWMA president, says in describing the program. “Unfortunately, the unpredictable nature of environmental cleanups can mean that both factors can be overrun in the blink of an eye. That’s why we created SECUR-IT, so developers are provided assurance that their property’s environmental cleanup will go as planned, on time and on budget.”

While it might seem easier to avoid a contaminated site altogether, that is not always possible or there are other benefits to redeveloping a brownfield.

“It’s better to go into a site that you know is clean, obviously, but there are also advantages to going into a site that either needs to be cleaned up, or has been cleaned up or is the process of getting cleaned up,” according to Dailey. “I do a lot of work in Camden, for example, and it has a long industrial history and there really are not a lot of sites that you can basically say are 100% clean. … There are tax advantages and sometimes grants are involved. I cleaned up a site in Camden and we were able to get significant grants from the state to help with the environmental cleanup. That offset some of the liability for the developer and made the project a success.”

One important part of such a cleanup is choosing the right environmental professional to guide the work. While there are lists of LSRPs available, simply starting at the top of the list or choosing one located near to a site may not be the best way to find an LSRP. Again, getting the lowest-priced professional could prove most costly in the long run if that person is inexperienced.

Gov. Phil Murphy recently signed into law some changes to the site remediation law and the role of LSRPs, including that the professionals are involved earlier in the site evaluation and cleanup process, but these were considered more of a tune-up than an overhaul.

Still, because environmental laws change, it is important to have a professional well-versed in the regulations who understands that a prior No Further Action letter issued by the DEP does not mean a site can be assumed to be clean.

“There are new compounds of concern,” Zelley says, noting the latest chemicals the state DEP is focusing on are per- and polyfluoroalkyl substances (PFOA and PFOS) used most commonly in non-stick pans and firefighting foam that can affect the immune system and the thyroid and have been linked to certain cancers. “We’re talking about reviewing for compounds that 15 years ago, they weren’t even testing for. … It’s really difficult to invest in these brownfield sites if you don’t have experts advising you.”

An Overview of the Licensed Site Remediation Professionals Program