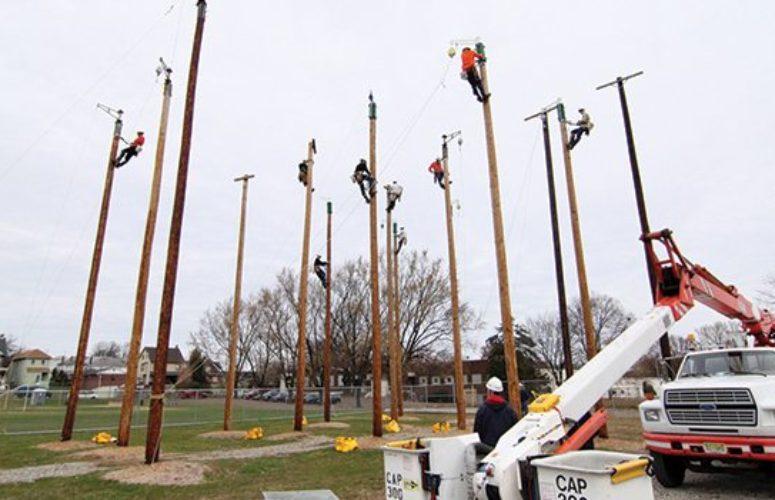 Electric and gas utilities throughout New Jersey are constantly training their new and existing workforces – whether it’s people in the field or in the office – with the assistance of institutions of higher education, the trade unions their employees and contractors belong to, and, of course, their own in-house initiatives.

This training is driven by a number of factors, including the need for more workers due to ongoing infrastructure improvements and resiliency initiatives, and the Marcellus Shale natural gas boom.

However, when talking with executives from a number of the state’s leading utilities, the bigger reasons for training – and hiring – new employees are the continued retirement of seasoned workers and the advancement opportunities existing workers have within their respective companies (as they move up the career ladder, new people are needed to fill their former positions).

Last October, New Jersey Board of Public Utilities (BPU) Commissioner Joseph Fiordaliso underscored the retirement challenge when he spoke at a Jersey Central Power & Light (JCP&L) event, and stated that utilities are facing “an estimated 50 percent retirement rate over the next five years,” and that “it is imperative that we begin to attract and train the workers of tomorrow.”

When JCP&L relaunched the program two years ago (it had been in place for an 11-year period until the company had sufficient field workers), it accepted 44 out of 1,000 interested applicants. The following year, 500 people applied and 40 to 45 people were accepted.

The PSI is now in the third year of a five-year reauthorization. “Probably 90 to 95 percent of our line and substations electricians will be hired directly through the PSI program,” James Fakult, JCP&L president, tells New Jersey Business.

JCP&L’s Workforce Development Group worked with the two community colleges to further develop the program, which was initially introduced by FirstEnergy several years ago. IBEW 1289, to which JCP&L employees belong, has also been a partner in the program’s evolution.

During the two-year program, students typically spend 2.5 days per week in the classroom and 2.5 days at a JCP&L training site. Upon completion, they graduate with an Associate of Applied Science degree in electric utility technology.

When asked what is driving the need to hire new employees today, Fakult responds, “In looking at the average age of the workforce, you know some folks are going to retire. We need people – a strong educated workforce – on the ground to repair, maintain and build infrastructure.”

Atlantic City Electric (ACE) is currently in the midst of planning a $6-million workforce development initiative that will include an area community college, thanks to last year’s merger between Exelon Corporation and PEPCO Holdings (ACE was a division of PEPCO). According to Vincent Maione, ACE president, the initiative will help “students and younger individuals understand what they need to do in order to get ready for positions that will be available in the future.”

Already, ACE has hired 30 workers these past few months and, at the end of January, was planning on posting opportunities for 15 entry-level positions leading to apprenticeships and subsequently, linemen positions.

Maione explains that the path to becoming a journeyman lineman begins with being a helper – assisting a line crew for six months. Afterwards, the person enrolls into an apprenticeship program, which can take up to four years to complete.

The programs have also been tailored in conjunction with IBEW Local 210, to which ACE employees belong. The utility has relationships with area community colleges and hires graduates from Rowan University’s engineering program.

At South Jersey Gas (SJG), the regulated natural gas utility division of South Jersey Industries (SJI), there is a steady demand for employees as workers move on to new opportunities within the company. According to Barbara Del Duke, general manager, stakeholder relations at SJI, “We are constantly looking to develop our talent and have them undergo different experiences. As they move on, we need new recruits.”

These recruits are trained at the SJI Technical Training Center in Glassboro. Ken Harrison, management technical trainer at the facility, says several different programs are offered, which usually run six to eight weeks. “We are bringing in 5 to 15 new hires through the program per year, but we train hundreds of existing employees annually,” he says.

SJG works closely with a county’s Workforce Investment Board (WIB), area contractors and community colleges to develop and maintain curricula for its current and potential workforce. Currently, two programs are being offered through the WIB: the Operations Technician program and the Utility Locate Technician program.

SJG actively reaches out to area high schools to get students interested in careers. According to Del Duke, students are surprised at the range of jobs and opportunities at the company.

Public Service Electric & Gas (PSE&G) recruits, hires and trains new employees for a number of positions. According to John Latka, PSE&G senior vice president of electric and gas operations, “When we are looking for an employee with specialized skills and expertise, we partner with non-profit organizations, including those serving veterans and schools, to recruit.”

PSE&G delivers training in three ways: classroom, hands-on and on-the-job. “For some jobs, we also use apprentice programs to ensure we are fully educating and supporting our new hires,” Latka adds.

Opportunities in the electric and gas utilities sectors exist, and companies in the field are doing their best to entice people to join their ranks.

JCP&L’s Fakult comments, “Working in this industry is more than just a job, it’s a rewarding career. There are tremendous opportunities for advancement. We offer good pay, good benefits and the work our employees provide gives them a tremendous sense of pride for the communities in which they serve and live.”