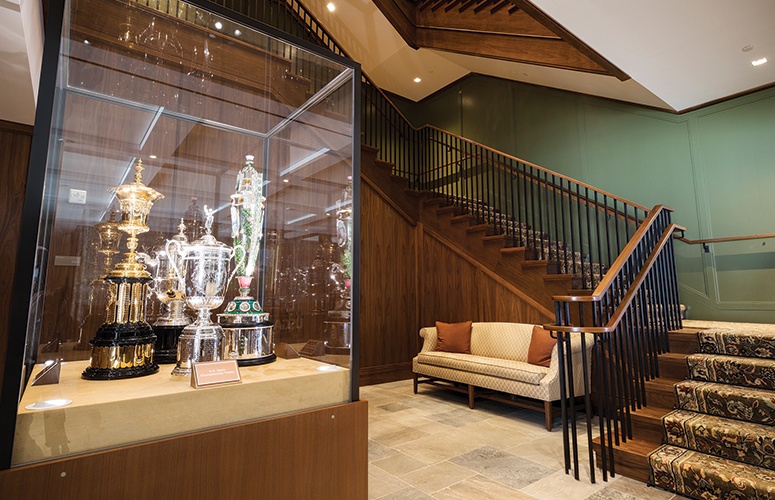 A cabinet featuring the trophies of the U.S. Open, U.S. Women’s Open, U.S. Amateur, and U.S. Women’s Amateur is displayed in the main lobby of the administrative building at the United States Golf Association campus in Liberty Corner.
General Business

USGA Engages On and Off the Golf Course

The USGA has been in Liberty Corner since 1972, after moving out of New York City in favor of a more spacious site that was more befitting to the game of golf. The newest renovation and expansion marks an acknowledgment of a cultural shift for the organization that encourages employee openness and collaboration – a trend we are seeing more companies gravitate towards.

The new offices include an outdoor 15,000-square-foot putting green, visible from the interior offices, which Rand Jerris, senior managing director of Public Services for the USGA, says helps to “bring the outside in,” making employees feel more connected to the environment and the game of golf itself.

“The organization is transforming into being much more externally engaged with the communities that we serve as well as being collaborative across the golf industry,” Jerris says. “We’ve had a lot of growth over the past decade, and we had a building that we felt no longer worked for the organization from a culture perspective.”

The original building, which used to house both the USGA Museum and administrative offices, is now solely used to present the history of golf, and stands as the oldest sports museum in the US. It is the world’s largest, most comprehensive collection of golf memorabilia and contains 80,000 artifacts relevant to the game.

“We’ve realized there are a lot of advantages to being in New Jersey,” Jerris adds. “We have connectivity to [Newark] airport, which connects us to anywhere around the world. This is very important, as the organization has become very engaged globally, specifically in Europe and Asia.”

The USGA has also long been an industry leader in environmental and sustainability initiatives, and the new headquarters allows it to showcase these efforts.

“We’ve made great progress as an industry,” Jerris says. “Over the past 10 years, golf has reduced its water consumption by 22 percent. We’ve also reduced nutrient consumption – fertilizers that end up causing problems downstream in the water system – by 40 percent.”

The USGA is the largest funder of turf grass research in the world, having developed new strains of grass that use less water, are drought tolerant, disease resistant and require less mowing.

While this technology greatly benefits golf courses and helps to reduce their physical footprint, Jerris says that the technology also transfers into many other environments as well. “If you have a lawn at home, I can almost guarantee that the grasses in it were developed with USGA funding through the decades. From sports fields to parks, most of the maintained green spaces that exist in our communities very likely have grasses that were created with USGA research and support.

“We’re also building a pollinator garden in front of the building that will contain 4,000 plants with more than 20 pollinator friendly varieties,” Jerris says. This will help sustain bee populations and other pollinators, which are vital to the health of green spaces and the agricultural industry.

As stewards of 200 acres in a heavily developed part of the state, Jerris says it is not lost on the USGA just how big of an impact and role it plays in providing and maintaining the existing habitat.